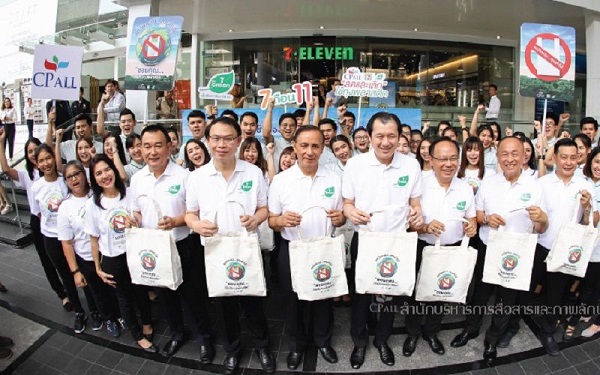 7-11 is by far the most popular minimart in this country. I think that you could suggest without much difficulty that there are entirely too many of them. I once lived in a city with only 40,000 residents and as i can recall there were 14 of them just in the "metropolitan" area.

There are 2 things you can count on at every 7-11: People are going to block traffic by parking improperly in front of it, and tons of plastic bags are going to be given out for just about anything.

In a recent announcement, the top brass at 7-11 has stated that they are going going to do away with plastic bags, first at just over 100 stores as a test, and then a nation-wide ban across the entire nation. This is definitely a very good thing.

As an ex diving instructor in the Andaman sea, i can personally attest to the fact that these bags are friggin everywhere and while it isn't entirely 7-11's fault, there is no denying that they are a major contributor to the problem.

I have been in 7-11, purchasing trash bags, which were made presumably of plastic (sorry, but i need bin-liners) and these bags were already in a plastic bag (with a handle) and they by default put the bags that were in a bag, in a bag. The staff members are like automatons and will immediately reach for a plastic bag regardless of your purchase. I no longer smoke, but many times i would buy a pack of ciggies and they would put those in a really tiny plastic bag, which is ludicrous. Now it is unfair to say that 7-11 or any other business is responsible for these bags ending up in the ocean and a lot of the environmental contamination can more likely be attributed to the lackadaisical attitude of the population towards littering and also the abysmal state of the country's waste management. However, this ban by 7-11 is step in the right direction as it has worked in other countries such as Australia, where it is almost impossible to obtain a free plastic bag for just about anything.

Now here comes the cynic in me!

Thailand is a country with a tremendous plastic bag addition due at least in part to the fact that a great portion of the population gets around on motorbike and therefore their purchases hang off the handlebars / mirrors while on their way home. Unless 7-11 or the government or whoever, is going to make reusable bags available for free or very very cheap, the population is not going to take kindly to this bag elimination, regardless of the obvious environmental benefits.

Also, 7-11 can pretend to be concerned about helping the environment but I would be willing to bet that the top management is elated that they can claim to be environmentally concerned when a side-effect of this policy is that they are going to save a tremendous amount of money on their bottom line as far as costs are concerned. Think about it: If environmental preservation was 7-11's primary concern, why not just transition to paper bags, or the plastic alternatives that biodegrade or dissolve in water? I'll tell you why: Those things are expensive. 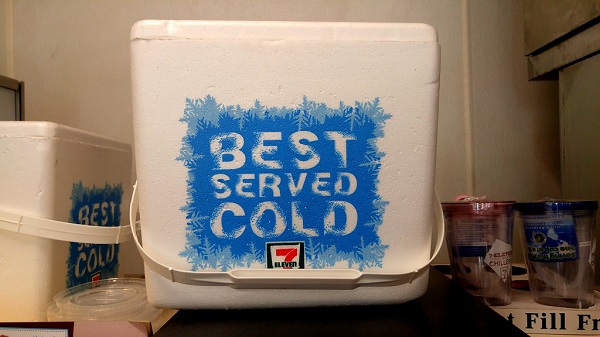 source
anyone selling Styrofoam coolers doesn't get to claim that they have an "environmental agenda."

This way, 7-11 gets to cut costs and look like a hero at the same time. Plastic bags will still be available, they just wont be free.

Don't get me wrong: I am happy this is happening and I'm for it! But the country needs to start investing in better waste management since so much plastic ends up in the environment due primarily to the lack of infrastructure and education, not so much because 7-11 gives people something to carry their purchases in. Also, this doesn't address the "market fiasco." Outdoor markets are immesely popular in Thailand and with good reason. I can only presume the surrounding countries are the same. Everything... and i do mean everything in these venues comes in plastic, sometimes multiple levels of plastic and a plethora of single use cutlery. If you have a chance to go to a market go take a look; the amount of single-use plastic that is given out at every one of these places in a day is just staggering.

If I was a gambling man, I would say that this new policy of 7-11's will be met with backlash by an unconcerned public and this new decree will go by the wayside once the news stations stop talking about it. In my opinion it will be like the nationwide "100%" strict enforcement of motorcycle helmet-wearing.... which lasted about a month.

We need to stop throwing trash into the environment since it's only bad for US! Also for animals and plants, but we should care about how this may affect us! :/

Yeah, they're doing this at a lot of stores in the US these days. Most of the chains plan to have no plastic bags by 2022, where you have to bring your own tote bags or boxes. Some of the places we go to now don't have bags and offer a box or two, but prefer you bring your own shit. I do think it's for the environment though, and not so much the money thing considering it's chains like Kroger.

I don't really care either way, considering plastic bags are fucking ass and rip on me all the time making me want to rip my nipples off and eat them like grapes.

this is true about the bags, so thin that if you buy anything of substance you would need to double bag them.

Some of the places here like the more "luxury" grocery stores are providing cloth bags with a "deposit" they will give back to you if you return the bag. This is good and what i hope 7-11 does.... we'll have to wait and see.

Of course it was really disappointing that this cloth bag was already wrapped in a plastic bag) and when i bought it the lady put it in ANOTHER plastic bag....

I'm like "you're totally are missing the point here aren't you?"

I mean, the point is to murder as many small animals as possible to attain the wettest of all boners, right?

Hope, one day we can eat the bags or throw them in the compost.

I've seen the terrible pictures of plastic and garbage in general, in Thailand. I know that you've been around the world, and have seen many cultures and many beautiful landscapes without trash; so this must be very disheartening to see everyday. Ugggg... is there no end to it. They are transitioning to paper straws in this area, and I even see many popular resorts getting away from straws in general. You make a good point here and love you calling them out as being steward to the environment. haha. We have over 20 convenience type store in town. Our population is just over 70,000 but we are the largest city area wise in NJ (over 60 sq mi) They all seem busy.. hmmm .. Wawa is bigger here than 7-11. I think we have only 7-11 left.

As you are saying in the end here.. Enjoy it while it lasts.

when i was a kid 7-11 was a big deal in the states but they seem to have dried up in lieu of places like Wawa or Sheetz. However, i have noticed that these two places tend to be rather gigantic and the ones i have been in normally have a lot of hot food for sale as well. But these were not in metro areas. More like truck stops.

Gotcha. That makes sense. Wawa is really starting to phase out a lot of brand names and branding their own products. Like they don’t have enough of the market.

I am kind of on the fence about this one. I do agree that we consume too much plastic and a lot of it ends up in places that it shouldn't. As a responsible dog owner, I would be in a bad place if I didn't have these spare plastic bags to put my dogs business in. When my wife and I go shopping we have reusable bags that we always take with us. Every now and then we bypass them so we can build our stash of plastic bags. We keep a bunch of them in each of our vehicles and our travel trailer so that we can pick up our dogs poop instead of just leaving it laying around like some people do. Fun fact, my mom and sister just recently started taking leftover bags and knitting them into sleeping mats and handbags for homeless people and those living in underprivileged countries. It is amazing what you can do with some things. If I remember right, it took quite a few bags to make just one sleeping mat, but the feedback she got from them was amazing. On a sad note, people were actually attacking other people and stealing their handbags made out of plastic bags because they were so desired!

yeah, i use all the plastic bags i end up with for the same reason.

Yeah, i use all the
Plastic bags i end up with
For the same reason.

I just saw your 7-eleven store pic and I just smiled. This store is so cool like this is the actual survivor for the people visiting there. Quite happy that they stopped using plastic.

I think we have been charged for the last 10 years or so for plastic bags and it hasn't made no impact. Shops make more profit and it has totally been lost as to why. One of the smaller chains bought out a paper bag the other day and they are nearly 3 times the price of the plastic ones at the other shops. We have all been spoilt for way too long and this needs to be fixed.

Coming from someone who parked effed up today in front of a 7-11, not even kidding I am glad to see this too. In parts of Colorado (Fort Collins) it is illegal to give away bags. They sell them, and when you have to buy them you think twice. This just went on the ballet for Denver. Hope it passes.

I have visited almost every country in SE Asia and I live here in Thailand for 2.5 years and I have to admit that Thailand is the absolute worst in terms of plastic consummation. It's absolutely insane how much plastic they use.

Also Tesco has the thing going on where they ban plastic bags on every 4th of the months. Like seriously, wtf?! Why don't they just ban them permanently?

At least there is something happening now.. Even it's incredible slow..

yeah, doing something is better than nothing, which is what has been done in the past. I would be honestly surprised if this 7-11 ban wasn't simply reversed as soon as no one is paying attention though. Such public relations and spotlight for the media is quite common over here. As soon as no one is looking they will just return to what they have always done. I don't mean to be a pessimist, but I have seen initiatives like this come and go many times in Thailand.

It's so sad man. They should think way more about the future and how badly the plastic will effect our planet. Also ppl need to be better educated to not throw rubbish on the streets..