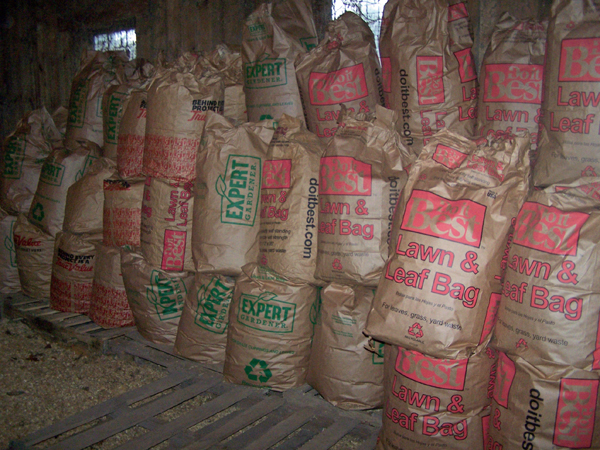 The incoming storm and too many days of too much work took its toll on my husband. He went out in the early morning and brought back 2 truckloads of leaves before it rained, which my helper friend and I unloaded and brought to him to stack. That was all he did until he cooked supper. He had a lot of pain all day. Hopefully he will take another day on Friday before resuming work, but I doubt it.

My helper friend said he didn’t mind being out in 38F in the gardens and got an enormous amount done on Thursday. He finished off Rows 4 - 6 in the New Herb garden, pretty easy - just deadheading and cutting down the peppermint.

Then he cut down the very dead Jerusalem artichoke stalks. The comfrey is very flattened by the heavy frosts inside the Big garden.

He moved over to the Anne raspberry by the fort and cut the stalks down. I’d just asked him to cut down tall dead stuff. Doing a cleanout of weeds and leaves can happen in the spring, as it takes much longer to do.

Because the Small garden had been abandoned all summer, the Anne raspberries had gotten a foothold and grown up inside. He wanted to dig them out, so I said go for it. He said some of the roots were bigger than my thumb, after only a season of growth. I’d gotten a lot of berries off them all season.

He moved over to the other side of the gate and cut down the hibiscus stalks. I had him leave the rose, as it still has buds on it. I doubt they will open, but the pop of color is nice.

After a cup of tea and a break, he started on the South Herb garden. But when I went out to show him what to cut, it had just started to sprinkle rain. I realized I’d forgotten the tarps on the line, so we hastily took them down, folded them, and got them into the Tonka garage.

The plants were so high on this corner, I’d forgotten the rose was there. When I went out to see how he was faring, I saw it and he cut it down to 8” for the winter. Most of my thyme had died along the stone steps, due to walkway stones piled on it.

West (bottom of photo) and West Herb (top) cleaned out

He went around the corner (at top of photo) and started on the West Herb garden. By lunch time he’d almost finished the West garden (at bottom of photo).

West (bottom of photo) and West Herb (top) in September

I am so grateful, every time he is here, for all that he gets done that I can’t do. Prior to his cleaning out, it was hard to know there was anything in these gardens besides weeds.

In the spring it will be because of him that I will be rebuilding these gardens and putting the edging back into place. All during the winter, once he no longer wants to be outside, we will be working on the house, cleaning and organizing. He makes such a difference in our lives!

While he was outside in the gardens, I was double checking the electrical layout. I had to update my plans to match what had been built, then figure out where outlets and lights should be. This was all the construction work done on Thursday.

Super jealous of your leaves! Ours still haven't completely fallen yet, but I think they will this week with our freeze coming in.