The Movie Afternoon and the Last Lighting - January11, 2020 @goldenoakfarm 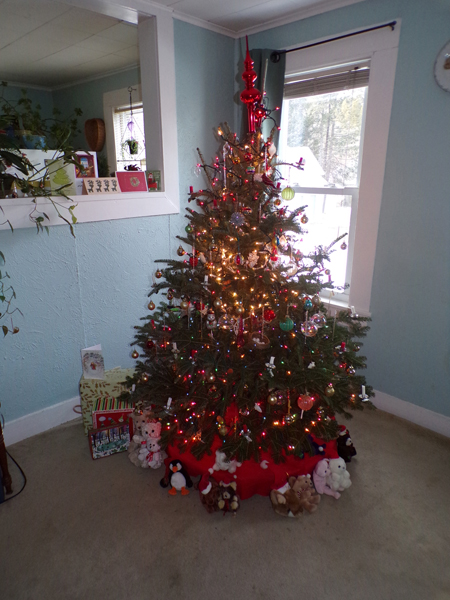 The tree I cut down and decorated with my friend had enough candle length left for one more lighting. So we decided to do it on Saturday, after having a nice lunch and watching movies.

We had a lovely lunch of macaroni and cheese (I made), aromatic pickled beets, a salad of smoked lox and salmon and greens and polenta, and borscht soup with sour cream and lemon water. We sat near the tree and I check out all the ornaments she had added or moved around.

Unlike artificial trees, real trees change as they get older in water. The branches droop more. So she would move the dangling ornaments to a higher spot for more visibility. Or she would change locations to enhance a color scheme. She had also found a few new ornaments at sales. It was fun looking at the changes, which were all for the better.

Then we settled in to watch Christmas movies. My friend had not seen The Christmas Shoes series. They are based on books by Donna VanLiere. They start with a 10 year old boy whose mother is dying at Christmas and carry through to what happens in the following decades.

After watching the first one, The Christmas Shoes, and digesting our lunch, we stopped and popped some popcorn and made hot cocoa. We had kelp, sea salt, and nutritional yeast to sprinkle on the buttered popcorn.

By then it had gotten dark. We closed the window curtains and she lit the candles. Some of them, especially the red ones, were very short and we soon had to put those out. The ones closest to the window seemed to burn much more slowly, and it was a good long time before we put them out.

Once they had cooled, we took the holders off and removed the candles and wax from them. We enjoyed the lights and decorations some more. At one point my friend got out her photo albums and we looked at photos of trees gone by and of the white cat who investigated one as a kitten.

But soon it was time to pack up, load the car, and head home. It was a lovely way to spend a cloudy but warm (50’s) afternoon.