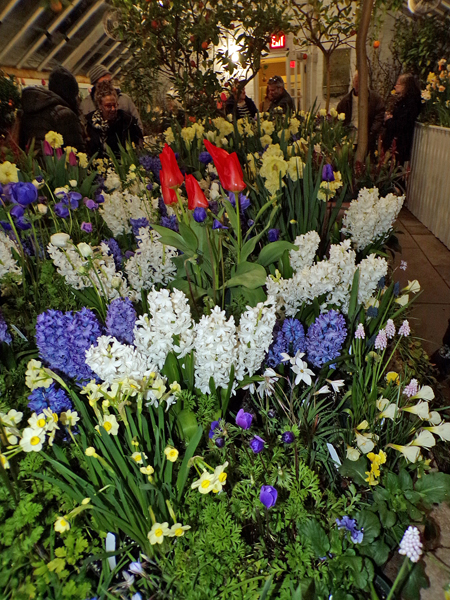 On Friday night my friend and I went to the Smith College Bulb Show. She has taken me to the opening night 3 years running now.

She likes to attend the lectures and thought this one might be really interesting. It wasn’t. The speaker is a well known permaculturist/food forest person in this area, but I’d never heard him speak before.

We’d hoped for a lot of information about growing in this area, and what we got was a lot of facts and figures about the global mess. It seemed much of his information, especially about livestock, was not supported by facts or real life knowledge, and he even acknowledged this at the end. Oh, well.

So we hiked down to the greenhouses and someone opened the door ahead of us and the heady scent drifted out. I live for that first heady breath every spring!

Just inside the door these odd bells greeted us. No idea what they are, but they were so glossy they looked like plastic.

The next really intriguing plant was this witch hazel. They had many of them scattered throughout the 2 greenhouses.

The center island of the second house featured camellias. It was very different taking photos at night in the greenhouses. I’d forgotten my camera the first 2 years I went at night.

The back of the second house had a huge display of pussywillows.

The first house’s island was citrus fruit trees and hyacinths. The hyacinths created the heady scent.

My friend said the greenhouses had a new director and we did notice a few changes to the show. There was no real “theme” as in past years, and no exotic bulbs either. It was more of a “spring bulbs you know” sort of thing. Also the bulbs weren’t quite ready, as many had not opened yet. I resolved to go back in 10 days or so with my husband during the day and see the full effect.

But the heavenly, heady scent was throughout and the sight of so many flowers uplifting. We headed out to the reception and discovered it was far more extensive than in past years.

There had been mention of a “rumor” of cricket flour cupcakes, and I wanted to try one. They’d also made 2 types of drink: a strawberry/Tulsi basil and a lemonade. In addition, there were crudités of many colored carrots, cukes and cherry tomatoes and a wonderful white bean dip. For sweet there were maple cupcakes and black bean brownies.

I got a glass of the strawberry/Tulsi basil drink and it was delicious! I picked up some crudités and dip and went looking for the cricket cupcakes. They were pretty small, with only a tiny bit of frosting, and cocoa colored. I selected a brownie and a maple cupcake and found a seat.

After fortifying myself with the crudités and goodies, I eyed the cricket cupcake. I’d noticed several half eaten ones on others’ plates and wondered, “how bad could it be?”

But then a woman standing next to me tried hers, and didn’t seem disgusted by it, so I took a nibble of mine. I cook w/o wheat, using millet flour in place of it. This cricket flour cupcake reminded me of the millet flour or other alternative flours. The cocoa flavoring was mild, not intended to mask anything. It was a bit drier than the maple cupcake made with wheat. But it was an okay snack. No bizarre flavor or texture.

My friend can’t do cocoa so she didn’t try one, but we did some testing of the colored carrots for flavor. I found the yellow ones blah, the deep orange ones really carroty, and the purple ones very sweet and tasty. That’s as it should be, as the deeper the color the more nutrition and benefits the plant has.

So that was the Bulb Show for this year. On Wednesday she is taking my intern and I to the Mount Holyoke College Bulb Show. More spring flowers!

The flowers are just lovely! I can't wait to see the next Bulb Show on your schedule. Maybe the bulbs will be more ready than this one. That would be awesome!

Your photos made me want spring to come faster, like yesterday. I used to have a lot of pussy willows and I sure do miss them. Cricket cupcake?!?!
I sure have missed a lot and will catch up this week.