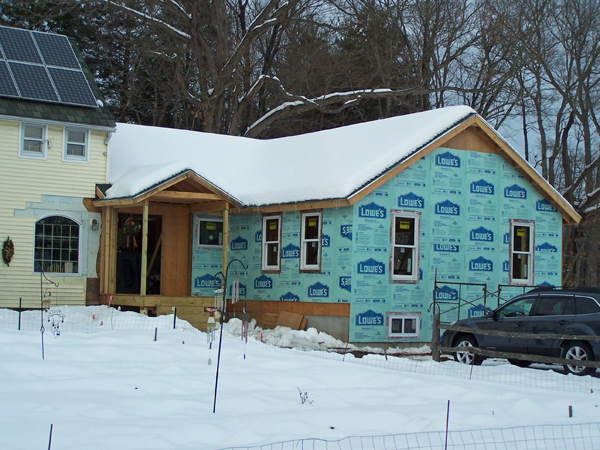 It was pretty cold on Sunday morning, around -3F. He got a late start around noon, waiting for it to warm up some.

I had to go out with him to help with these 2 big double hung windows. We took the glass out so they wouldn’t be so heavy. I was inside checking alignment and holding the window while he worked on the staging.

They went in so quickly he wanted to do the first of the awning windows, one that went into the kitchen. So I helped him with that one too.

Then he decided to put in the 2 little cellar windows. He did those by himself. He was cold and tired by then and still had to get everything back inside so it wouldn't get covered in ice.

The kitchen window and door opening

All these windows will have wooden grilles in them. I’ve yet to paint and stain those. They will be the dark Jacobean stain inside, white paint facing out.

Monday it’s to rain all day starting about 7AM. We’re hoping it melts the snow off the roof. Tuesday it’s supposed to be in the 50’s and showers. We’re hoping the snow is gone and he can finish the capping on the East side. If he can’t get it done then, the temps plummet again, so it won’t get done.

In the meantime, he can put studs in the big window frames to support the insulation covering them until spring, build up his mistakes on the next 2 window openings, put studs into the other gable end, start on making the gussets, and I think he said he had some other inside things he could do.

The rest of the week we’ll get the next 2 windows in, I think he wants to get doors in, and just make sure it is weathertight for the cabinet delivery on Friday.