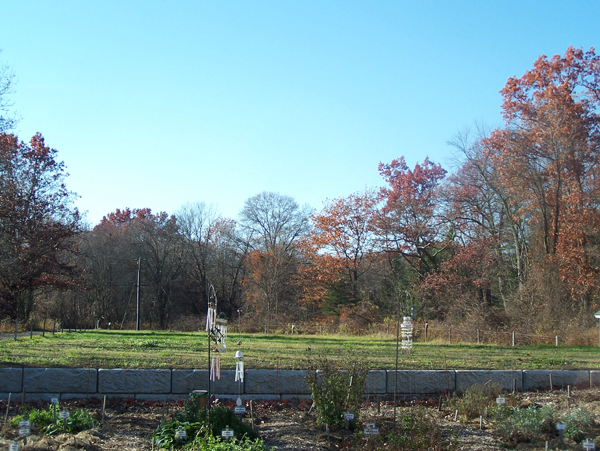 Wednesday was the last nice day for a long while. After Thursday’s rain, temps drop into the 30’s daytime and stay there, unless it is raining. My intern was here and we zipped outside to get many prepping chores done.

First we re-organized the Tonka garage. I store the outside Christmas tree in the very back of it and I would need it in 3 weeks. It may be the only Christmas tree I put up this year. So we dragged it out and piled it on the sink.

Next we checked the water barrel to make sure it was empty. I tipped it to take the top off, and got a waterfall on me. I’d forgotten the top was deeply recessed… But it was empty so we put it where the tree had been, in the back. The 2 iron chairs just fit over the veg garden amendment totes so they were inside. It looked like the 4 lawn chairs would just fit in the walkway. But they needed washed first, a job my son was to do when it got warmer.

The leaves were all off the big oak, so I decided, after a bit of deliberation, to take the tarps up. I was looking at all the leaves in the un-weeded section, and just knowing they would blow over into the mulched bit. I thought about covering the un-weeded section with the tarps, but my intern pointed out, it might not be good for the tarps to be out all winter. So we just took them up.

Most years the tarps don’t come up until the first week of December, when all the leaves are off. By then, they have a lot of water and leaves and acorns and can weigh up to 75 lbs. They are a workout to pull over the bank and dump there. Not this year, just a few dry leaves. So once shaken out we hung them to dry on the clothesline.

No, that’s not snow! It’s the seed from the butterflyweed that is outside the New Herb garden, stuck in the thyme.

Then we headed to the New Herb garden to cleaned out some of the leaves, the mess from the butterflyweed in Row 1, and cut down the dead stuff and deadhead.

I tackled the mess from the butterflyweed in Row 1 and my intern started on Row 2. It took me quite a while to get most of the seed up. As soon as I touched a branch of butterflyweed, the seed blew east, as of course, I’d finally gotten out there on a windy day.

I finished off Row 1 and went down to tackle the tansy at the end of Row 2 while my intern pulled a very invasive weed out of the walkways and the arnica bed in Row 3. Then she worked her way down the rest of Row 2. Then we finished off Row 3 and picked up equipment and went in for lunch.

The other 2 rows just had a little deadheading to do, but that won’t get done this year, I don’t think. The echinacea paradoxa in the back of Row 4 has now survived 4 heavy frosts and still looks pretty good. It is not supposed to be hardy here….

My son had gotten the chairs done and left them in the sun and wind and they had dried. So I put them into the Tonka garage. They just almost fit in the walkway, but will be okay until spring.

I had a few minutes left so I took the broom to the tarps, as the wind had dried them off, and knocked off what dirt and leaves I could. There would be no washing them this year, for the 2nd year in a row. Maybe next spring…

We’d also drained the big hose he’d used to wash the chairs and put it away. All that’s left to do is on Thursday when they are dry again, take down and fold the tarps and put them away. It will be cloudy and cold until the rain moves in and it will be in the 50’s. So we’ll get out there as soon as we can before they are wet again.

The 1st Fence garden was dug up when they worked on the walkway and porch area. The arrow points to a very hardy dianthus that survived that ordeal, and is still flowering after 4 hard frosts. To the right of it are snapdragons. Behind it, New England aster. It’s resting on a bit of New England aster.

When we came back from our trip into town Wednesday afternoon, we saw at least 4 bluebirds sitting on the posts in the front pasture. It looked like they were flocking up to migrate. None too soon… Too far away for a photo.

Thursday my helper friend is here. He’s a bit hardier than I am, and may elect to go out and cut down more tall dead stuff around the yard until we take tarps down and it starts raining.

My jobs are to check the electrical plan for the addition so we can get an estimate on that. And keep working on pricing up rooms….

My husband has 2 truckloads of leaves to pickup, not sure if he will do it this morning or tomorrow morning when it’s much colder.

There is so much work to be done to get winter ready and it looks like you are ready. Impressive gardens you have there. You have butterfly weed! Yay! Good for you! Do you have any butterfly photos from this past summer?

We had a LOT of monarchs this year, and I might have one of those, and one we found on our window:

Nice photos of the Painted Lady! I am very happy to hear that you had a lot of Monarchs. Thanks for helping them to thrive. : )

Congratulations, your post has been selected to be included in my weekly Sustainability Curation Digest for the Minnow Support Project.