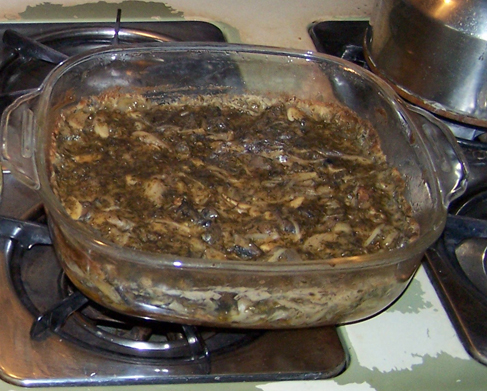 On Thursday, I was feeling a tad better as the fever had broken in the night. My helper friend was here and as he is a wonderful cook, I had decided to keep him busy with cooking. He is here for a long period on Thursdays, so I needed a long job for him. I remember a recipe I had made that seemed to take me forever and used shallots.

I’d had this big pan of the seed rejects in my fridge for weeks and it would be nice to free up the space. Plus they would not keep for much longer.

So he set to prepping the shallots. I weighed them up and it looked like there were enough for a double recipe. I would freeze portions for future meals.

I had found the recipe here several years ago.

The last shallot prep required was splitting them lengthwise.

We were using our own bacon, some of the Herb cure we use. When we slice bacon there are always little pieces created. I save them for uses like this. This was a 12 oz lump of pieces.

He fried it all up crispy, as we were doing 2 recipes. It’s easier to find a use for leftover cooked bacon, than uncooked.

He used some of the bacon fat to brown the chicken. I had decided to go with our own boneless breasts and thighs rather than bone in. I’d thawed a lot of them for the double recipe so he did them in stages. These were last year’s harvest and I wanted to use it up.

Once the chicken was browned he laid it in the bottom of the 2 casseroles and put the shallots, sliced garlic, and mushrooms in the pan to deglaze it and to cook a bit. Those were to be put on top, but we left them in the pan once finished until we got the white sauce made.

I went to turn on the oven and discovered thawed chicken in the very back of it that he’d missed. So he browned that up and we added it to the casseroles. Then he used the chicken stock to deglaze the pan before adding it to the white sauce.

He’d measured out all the herbs, some of which were ours, and put them in a bowl to add to the white sauce.

Once the white sauce had thickened, we split the vegs between the casseroles and poured the sauce over the top. The casseroles were covered and into the oven. I was cleaning up around the stove about 10 mins later and found the bowl of herbs where he’d set it on the backsplash of the stove.

So I whisked the casseroles out of the oven, sprinkled the herbs on top and mixed them into the sauce as best I could with a spoon, and put them back in the oven.

I didn’t leave them in there as long as the recipe calls for, due to being boneless cuts. The long casserole was to be frozen in portions and the other was supper Thursday night. It made no difference that the herbs hadn’t been mixed into the sauce. They had permeated well anyways.

Another delicious meal from my helper friend!

It was REALLY good! We got 5 servings from the square one and 4 in the freezer from the rectangular one.