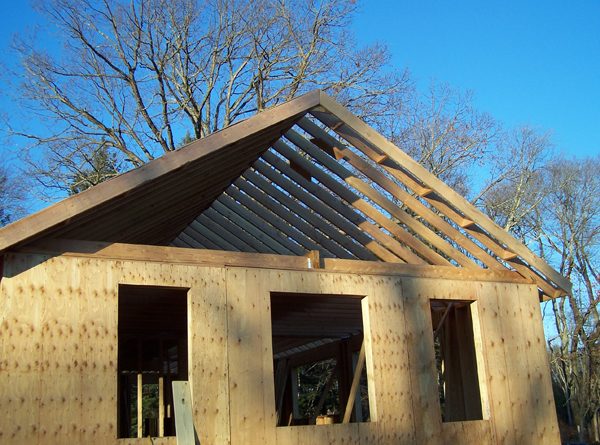 On Friday it wasn’t as cold, low 20’s and he got out there when the sun got well up. He’d announced he’d figured out how to get the barge rafter up by himself, and did so.

He then started laying plywood on the north valley and got ½ of it done.

The last thing he did on Friday was prep for the barge rafter in the north valley.

This photo made me do a double take. I know the north side is 1 flat wall but it sure looks like there’s a jut in it where the ladder is. It’s actually the opening for the back door; just between the sheathing on the valley, the ladder, and the opening, it looks funny.

Saturday is to be cold, mid 30’s. But it looks like 40’s for the next week with some rain in the middle. I expect he will be out there once he’s finished the milk run Saturday morning.

He’s contacted 2 brothers about putting the 20 sq of roofing on. Hopefully they will be able to do it before it gets too cold. He should have the plywood done by the end of next week, I think.

Thank you for using the #diy tag. This post has been manually rewarded with BUILD tokens in the form of an upvote with our @build-it.curator account. You can buy, stake, and exchange our "BUILD" tokens for steem on steem engine and Steem Leo's exchange

Build-it is a central hub for DIY and How-To projects. It's an opportunity to find and share the latest in DIY, and How-To tutorials. The recommended tags required when creating a DIY article are #diy, #build-it. #how-to, or #doityourself.