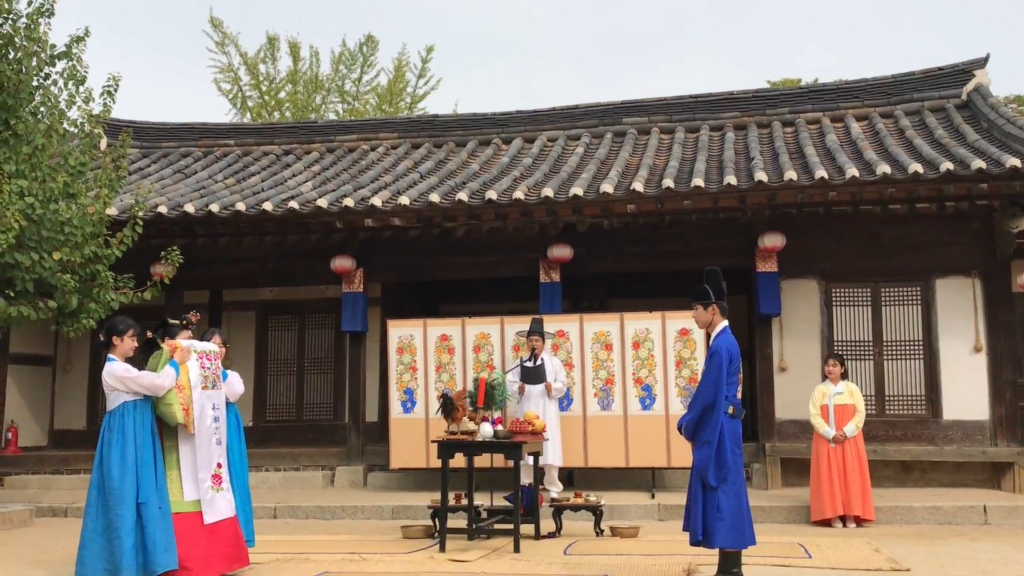 The Korean Folk Village is the best place to learn about ancient Korean folk customs and experience Korean culture. There are more than 200 houses in different regions in different stages of the Joseon period, including mansions of high-ranking officials, rural farmhouses, fishermen’s huts on the seaside, and Yamen, etc. You’d better make sure enough time to visit.

The ticket is KRW 18000, but does not include amusement facilities. When we arrived, it was during Halloween. The folk village will have some horrible activities at night, such as telling horror stories, but we don’t understand Korean. And their haunted house is also very horribly decorated and very atmospheric, which is comparable to Japanese haunted houses!

In addition to traditional buildings, there are also traditional wedding and ancient games of intangible cultural heritage, which can be experienced by tourists.

This is a traditional tasseled cap performance. The performers will wear a special hat on their heads. With the music, they will constantly throw the long ribbons on the hats, waving a beautiful arc. It must have gone through a long period of practice to get such a cheerful and beautiful dance. I have been thinking, will their head be dizzy?

Traditional weddings are held in a house. We sit on mats in the open space, just like guests coming to the wedding. The host will use brisk and humorous words to make the whole wedding full of laughter.

The bride and bridegroom will cover their faces with cloth when they are come out, and they have not met before marriage. The bride’s clothes are very heavy, and she has to hold the cloth all the time. If there is no help from both sides, she must be very tired!

There was a scene that the maid took off the groom’s shoes and hit the groom’s feet with a cane. Although I didn’t understand it, I still felt funny!

Walking to a remote place, I arrived a house that was actually live by someone. There were firewood and corn hanging outside. The stove was still the kind of old cauldron, planted a small field, and there was a feel of return to rural life.

In the yamen, there was a official , and there were a lot of torture instruments. I just met another person in official clothes who came to visit the official. If there without that modern person, it’s really like the scene that two officials meeting in yamen in ancient times!

I’m more like the atmosphere of the folk village after nightfall, especially during Halloween. You don’t have to go into the haunted house to see ghosts. You can also see handsome ghosts when you walk outside!

At 6:00 in the evening, there will be a traditional song and dance performance called “Er Xigu, Zheer Xigu”. It will first walk around the commercial street and then come to the gate square. It is the largest performance in the whole day. Don’t miss it!

View this post on TravelFeed for the best experience.
ocdphotographyappreciatortraveladvicekoreaancient

Congratulations @gillianlien! You received the biggest smile and some love from TravelFeed! Keep up the amazing blog. 😍 Your post was also chosen as top pick of the day and is now featured on the TravelFeed.io front page.