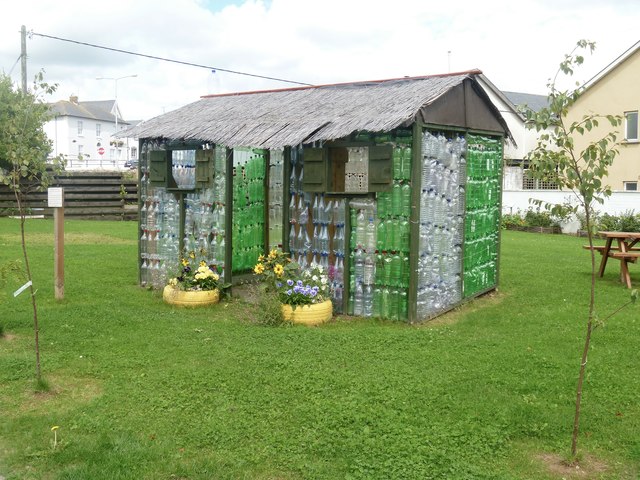 A house made of plastic bottles? It may sound strange, but for the first time it is seen in Africa. The idea is from Andreas Froege of Germany who wants to overcome the environmental problem caused by plastic.

80 percent of the plastic used in the world flows into the sea. It has become the world's largest waste stock. Plastic bottles take hundreds of years to dissolve. But Andreas Froje says that this waste can be a valuable resource if it seems useless. The path is simple and effective too.

Empty plastic bottles are filled with sand or ash and stored on top of each other and then selected from the slurry. This structure is made of nylon rope so that it does not fall. Andreas Froje is a trained mason and thus wants to protect the environment. Also want to give people living in poverty the possibility of living in the house.

For this purpose, ten years ago Froje formed a company called Eco-Tech in Honduras. Meanwhile, this company has built about 50 plastic houses worldwide. They have also been able to withstand earthquakes of magnitude 7.3. But still when Froje presents his plan, people's reaction to it is restrained.

Froje says, "Initially there is more skepticism than enthusiasm. But since it is beyond imagination, it is also attractive." Froje says that plastic bottles can bear more burden and push than normal bricks.
A year ago Froje decided to take this plan to Africa. In Uganda, he built a water tank and started a project with the renewable energy institute Dare in Nigeria.

Plastic bottles in Kaduna are becoming Africa's first home. For this, the recently trained Egyptians are getting bottles from hotels, embassies and common houses. These houses will get electricity from solar energy, the house will have its own drainage system and there will also be a machine to clean drinking water.

An important aspect of this project is the training of young people. The head of the Dair organization, Yahya Ahmed, says that youth unemployment is a major problem of Nigeria, it is a ticking time bomb. Young people are disappointed and dissatisfied with the government. Passing school is not a job guarantee. But this project is helping to keep youth away from violence. Yahya Ahmed says, "We had no youth involved in the recent violent incidents. But they have all been Udhami before. So this is a success." The long-term intention of the institution is to build a training center.

Teenagers are trained during construction of plastic houses. Till now, 90 people have got work in this project, who had neither any work nor training before. In January, these people will build a school building and will also train students to fill bottles. A teenager participating in this project says, "I never thought I could do this kind of work. Now I am proud to be among the few people in Africa who know this technology and I will tell it to others." "

Building a house with plastic is also cheaper than a brick and mortar. The price of a brick in Nigeria is as much as a common laborer earns throughout the day. But raising funds for such projects is not easy. Despite the success of Eco Tech, it is difficult to get sponsors for projects. Generally, NGOs and small village municipalities provide help for this. Yahya Ahmed hopes that the government of Nigeria will also come forward to help in view of its importance for environment and development.

You got a 95.96% upvote from @minnowvotes courtesy of @lawns!

This post earned a total payout of 2.832$ and 2.129$ worth of author reward which was liquified using @likwid. To learn more.