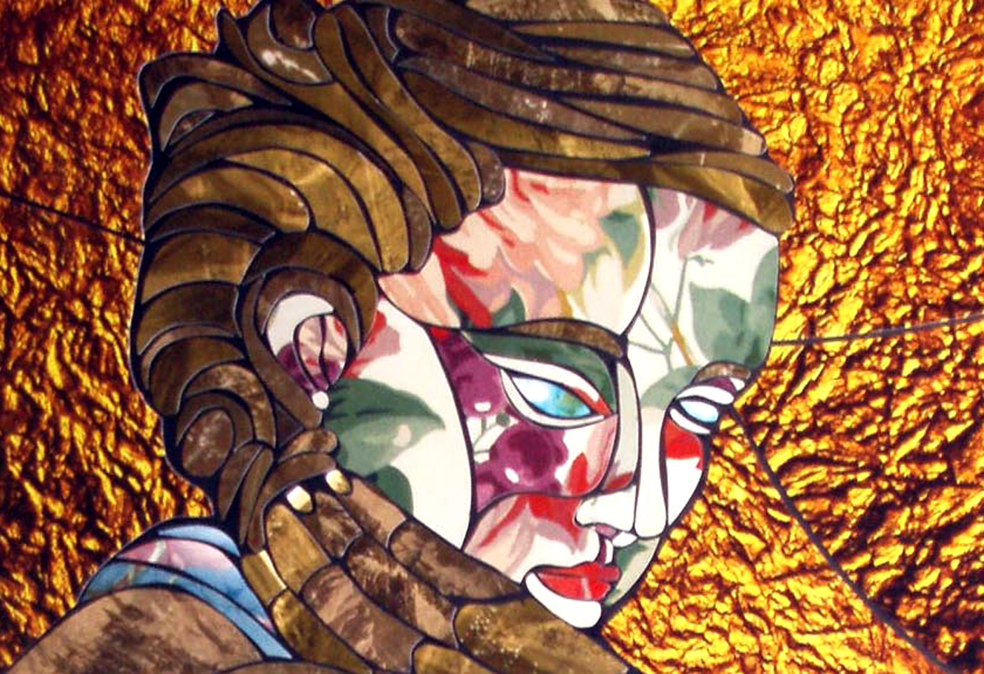 This is an old handcut collage artwork i created back in 2011. It is part of a series i started after the Portraits of Nature  and the aim was to experiment a bit more in using photographs as texture in my artworks. The previous one was very surreal, as every photo was cut and positioned in a way that it was no longer understandable and clear, but in this one i tried to keep some elements as they are and give a little bit of surrealism. I was seeking balance and a way to make the collages more alive. For this, i chose a colourful floral fabric for the dress and another one for her face mask. The body is made from a a winter landscape that i gave it a sepia tone and a filter like an old photograph. The body came out too muscular now that i am seeing after these years but this was because i used a lot of cuts. That was a problem of balance i had to work also. For the background i used a photo of a golden foil which is the trademark of all of the series.i did not compose is it very nice here but when later i used symmetries it created some really cool light patterns.

Thank you so much Armando, you make me very happy:)

I have a very Asian feeling about this artwork...maybe it's the florals...

Well spotted, i had it in mind when i was making the artwork. A fusion of styles and cultures:)

Oh, this is gorgeous!

Thank you georgeboya! You've just received an upvote of 44% by artturtle!

this is beautiful @georgeboya, I like that the body is muscular, here's to all the strong women in the world xx

Thank you so much, in a symbolic way i like that it represents the strong women of the world. I am more a supporter of the inner strength:)

Hi George, that is really beautiful woman, you managed to show the feminine side using floral texture for the face, not to intense but very well reflecting the aim to show a young woman. I lie the hair pattern and the colors you used.

As to body she really looks athletic but the same time it is not too much too. The golden background is very good idea that makes an impression of evening and warm sunset. Beautifully done!

Thank you so much dear Stef:) I liked too the golden background, actually it came out from an idea of using golden foil the way it is used at the Icons. It was rather difficult, but maybe in the future i will see again this idea:)

Cool! I like works in the collage, but they require time and effort.

Thank you, indeed it takes time and patience:)

You have received `20 NEOXAG` gift from @thereikiforest!

I love this as it almost looks like painted glass from an angle.

Thank you very much 😊 The original idea was to imitate the stained glass technique. I am happy that is obvious 😊

True and nice art blogs are rare. I love the mystery it shows and the colors make me happy