FOOTBALL FANTASY - WEEK #2 : ARE YOU THE BEST REAL-TIME SOCCER MANAGER? 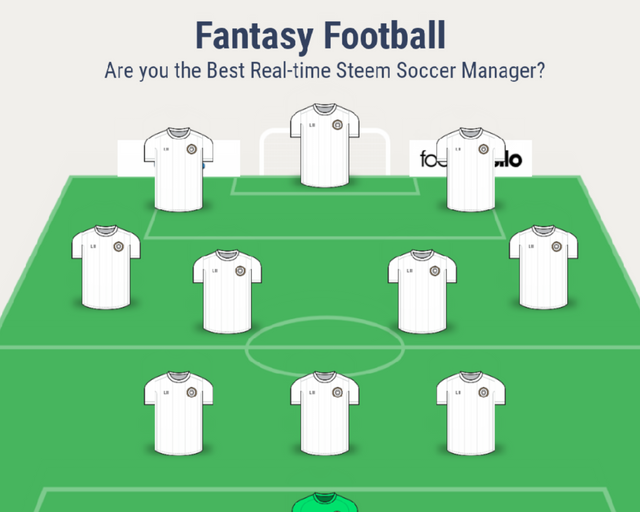 Most football fantasy games are limited to just one league, this isn't. This therefore provides an avenue for managers sign a wide range of players onto their team. I wanted to set a fixed amount of funds for each manager so that a team cannot be full of only "world class" players. This might be a little confusing to some participants so I have therefore decided to make each transfer free.

However, your squad must include players covering every vital position on the football field. Meaning you must include a variety of players whose roles range from the forwards to the goalkeeper.

FANTASY RULES
Tell us the name of your team.
All vital football positions must be covered; forward, midfield, defense and goalkeeper.
Players on the field must sum up to eleven.
You can have at most four players on the bench (substitution)
You must have at least two forward players
You must have at least three midfielders
You must have at least three defenders
You must have 2 goal keepers (one on the bench and the other on the field).
Your formation is entirely up to you but should be based on the rules above.
Provide a table indicating the name, team, position and a major league played by the player.
Use "Line up 11" to present your squad (optional)
Use the hashtag #footballfantasy and #steemfantasy as one of your five hastags.
This Fantasy counts for all of the player's matches between Friday and Monday. Points and winners would be announced on the following Tuesday.
POINTS AWARD SYSTEM
For indicating your team name - 2 points
For indicating your formation - 2 points
For every clean sheet a defender is involved in - 2 points
For every clean sheet a keeper is involved in - 4 points
For every goal a player scores - 3 points
For every assist a player makes - 1.5 points
For every player you include from a different league - 2 points
Good presentation of work - upto 5 points
SAMPLE ENTRY
I would use the just concluded matches last weekend as an example as to what is expected.

Stating my formation earns me 2 points.

I presented players from 7 different leagues earning me 14 points just for that.

If a single player scores 2 goals, I earn 6 points and if 3 of my players score 1 goal each, I earn 9 points.

I hope it's well understood. I'm happy to answer any questions in the comments section.
Prize Pool
Rank Prize
1st 8 steem
2nd 6 steem
3rd 5 steem
4th 3 steem
5th 2 steem
All images were made with the Line Up 11 mobile app.