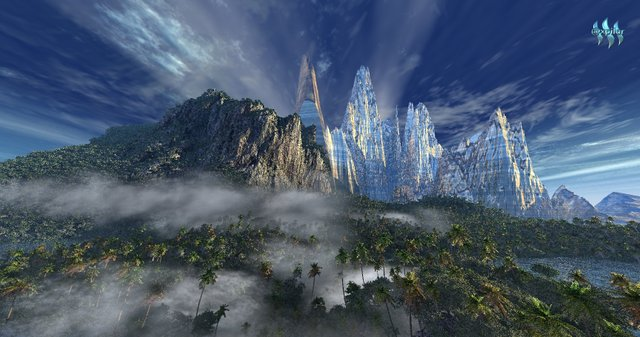 Sicilia and Boro escaped from History class again. They preferred to be in the Public Library. According to them, there were more interesting and fun stories to learn from. But what they never imagined was that one day they would become part of one.

Sicilia always went to the adventure area and Boro to medieval stories. She liked to imagine herself in jungles, deserts or mountains that brushed the sky. He, meanwhile, raised his honor by rescuing a princess from an evil dragon in a duel to death.

These book-loving children were always warmly welcomed by Mr. Charles Watford. As a librarian, he kept giving them new books every time they went to the library. They were simply his favorite visitors. But this time it couldn't be because Mr. Watford was so sick. The children noticed his absence and had no choice but to take the books for themselves.

While Boro was looking for his books on chivalry, Sicilia screamed. He ran and found Sicilia lying on the floor in one of the many corridors of the library. Sicilia was delighted with a book and smiled at it like a fool. Soon after, this same book emitted a very intense light and absorbed her. As Boro could not believe it, he approached to see what had happened and was also absorbed immediately, but not before seeing the title of the book on its back:

Not knowing how or why, the children woke up in a dense jungle. They were listening to all kinds of animals and the trees and bushes were watching them closely. Sicilia was delighted with this, but Boro thought they were all enemies. He shouted: "there are Moors everywhere". He immediately threw stones at them to "scare them off". But to their surprise, the trees bathed in mist pulled their roots out of the ground and chased them.

Had it not been for the adventurous cunning of Sicilia, they would have been caught. Sicilia knew a lot about wild language and was able to call a jaguar to get them out of trouble. Then she communicated with some moles and they offered them refuge in their complex subway base. In gratitude, the moles and the children squeezed their noses and continued on their way without knowing what awaited them.

Coming out of the tangled forest, Sicilia shouted: "Look, Boro, steep mountains of silver". She added: "we are rich, we are millionaires forever". But Boro didn't want to say anything and kept his wooden spear alert. While Sicilia ran in circles because of happiness, Boro saw everywhere in the mountains. He knew that dragons he faced usually were hiding there.

Sicilia had never climbed before and she marveled at the idea of reaching the cloud-covered peaks. With all that she had read, she managed to put together some peaks with which to climb. She convinced Boro to join her and in an instant they were several meters above the ground.

But for their bad luck, something shook, something woke up. It was not a dragon, as Boro thought. It was a Golem. All the mountains were in fact a gigantic Golem. This great creature had no problem scratching its back and throwing the children down. Boro said as he fell, "I have failed you, Don Quixote". At that very moment Sicilia put her fingers in her mouth and whistled to call two huge eagles. These birds caught the children and left the children to command them on their back.

The Golem was furious because they had woken it from its precious dream and then it threw blows to knock down the eagles and their riders. The eagles were dodging and avoiding the rocky blows, but they got tired little by little. Boro noticed this and thought of knocking down the Golem in a curious way. Boro took his spear, still complete, and threw it at the little toe of the Golem, who screamed like a thunderbolt in pain and after several jumps on one leg, stumbled and fell, breaking into a thousand of pieces.

As soon as the Golem was torn to pieces, the children saw everything around them better. And it turned out that in front of them they had a frightening glacier. It was much taller than the Golem and it seemed to be the castle of some evil being. On each side, beautiful beaches crashed into it, and beyond that, a shimmering sea could be seen. Boro could not contain himself any longer and said, "I knew it. We are the characters of a book called «Ugatrot Island»".

Siciloa was surprised, but quickly encouraged to follow and conquer the glacier. Boro wasted no time and ran with her to the cold zone.

Already very close to the glacier, it seemed to reach much higher than the sky. The children tried to be on their guard, but the cold was inclement and made them tremble at every step.

For this reason, the children were not prepared for when ice chips began to fall. Ice chips that up close were transformed into frozen children. They attacked Sicilia and Boro, but the climbing tools from before helped to fight them. With some wounds, tired and already very close to the heart of the glacier, they heard a very deep voice that said

You have dared to interrupt my plans!

These words were repeated several times and after a few seconds, a very intense light illuminated the whole place. Then an old man appeared with a luxurious cane in front of the children: it was Mr. Charles Watford! He said he was the creator of the island which in turn was part of the book he was writing. This book was a trap in the children's library because its main objective was to capture infants and take away their dreams and fantasies in order to create the most imaginative book of stories.

The children could not believe it. The man who served them so well in the library was just a wicked imagination stealer. Sicilia and Boro were sad about this, but they already knew how to stop this evil man. This island was a fantasy of the children that Mr. Watford was stealing to write in his evil book. That's why they were doing so well there.

The fantasy thief attacked the children with his magic cane. Out of this cane came penguins like missiles and a pair of dancing swords that cut through everything in their path. This happened while the evil old man said: "your imagination will be mine and you will be frozen soon". However, he did not take into account that the most powerful people around were children themselves. In other words, the Ugatrot Island came out of their imagination and could also disappear through it.

In the blink of an eye there was no longer an island and Mr. Watford was desperately drowning in the sea until he drowned in his own pages forever.

With this evil man defeated, the children returned to the library a little dazed, but happy to see all the work of that fool disappear and to be able to enjoy the books without any more traps from now on.

Hello! I am happy to write a new story from another outstanding digital image by @xpilar and to share it with you guys.

Thanks for the great fairy tale, I really enjoyed it

If your story is only here on steem, add taq #steemexclusive :)

I am glad you liked my story!

I see you have posted on hive too, so then you can not add #steemexclusive to this story