Digital image for the day (your writing story competition(102) || Spalien 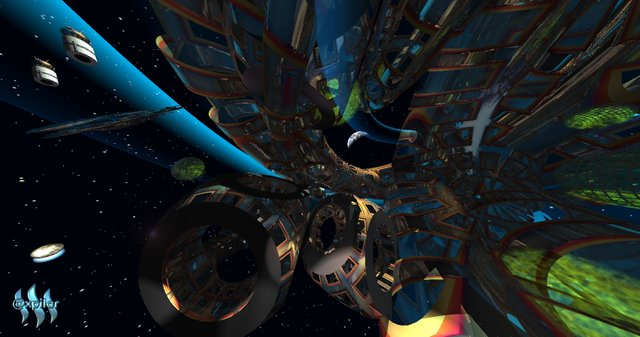 —Only one coin? Arcade are weird in Kansas, uh..

In the far galaxy cluster of Tetra-27h, a powerful and destructive alien species hace attacked and consumed everything their pervert minds have desired. Only few galaxies, including ours, left. But these unsatisfied creatures are on their way to devour them, too. Could you stop them?

—C'mon, alien are afraid of me. Let's get started!

Hello, cadet. We are about to get into the biggest Krapium's spaceship. Our mission is to reach operations room to control the spaceship and use it later against other trashy Krapium goods. These men around are part of the team. Earth believe in us, gentlemen!

—Really sick graphics for only one coin. I've always wondered how do they create things like these..

Cadet, are you ready for the action? Time to enter to the Krapium's spaceship!

Captain, captain, just resist! Your team is not going to abandon you. Fire to the nasty Krapium over him. Fire, I said. Come on, cadet, show us what you got.

—Haha, losing our captain in the first room? It looks like a joke. Oh, here come more aliens. Take this! Boom, get out of here, E.T.

Well done, cadet. Looks like the area is clear. I will now be the captain. Our mission does not change. Those of us who are still alive must get to the operating room. Hurry up!

Get ready, kid, they already know we're here and they're going to attack us with all they got.

—Damn, the place looks like it's going to explode for all Krapiums there are here. Yehaa! I haven't killed so many bugs since I crushed cockroaches in mom's kitchen. Argh, they've broken my oxygen base.

Keep it up, team! The Earth depends on us. Keep attacking hard. Hey, cadet, I already set the electric bombs. Shoot them to finally put an end to all this alien junk.

—Get out of the way, you slimy bugs! Your electrotherapy has arrived to calm your disgusting pains. Oh, what a blast! How come there are no insecticides like that in real life?

It's time to move on, kid. Soon, a lot of them will come and our men and arsenal are reduced. Up ahead must be the most wanted operating room where the brain of this entire evil alien race dwells. Let's keep running. Be ready!

—Or someone was there before us or they moved the operating room to another location.

Cadet, this appears to be a trap. You must be very careful. Something unexpected may happen... like us attacking you.

—But what the hell? You can't take me on. Two against one is a piece of cake. So in the end they had infiltrated the Krapium into human team. Very good. Argh, get the last shot of my gun, you bastards. Strike!

I have to congratulate the creators of this game. But what happened to the alien mastermind? I still don't know how I'll face it without weapons.

Hm, I see. Those floating sledges seem to lead to the next stage. Let's see what happens in this game.

—That's great, now I can rest my ass. This arcade seems unreal for just one coin. I always wanted to drive a ship that...

Goodness gracious! This final boss is Earth-sized. I think this is as far as I go. It's time to push all the buttons... Get lost, you wretch! Oh, what are these, your crazy offspring? I'm not going to lose after getting this far.

Traveler, your ship is in danger. Your time is running out. You must use the last resource -stellar accelerator- to go through the Krapium leader: press A+B, pull the lever forward and press the accelerator at the same time.

Ha, this is a lousy ending after having melted the trigger of this arcade. It can't be. Think, think, what's the trick on this?

Eureka! One time my father told me that in case of an imminent airplane accident, the pilot must eject.

Yes, victory, victory. I think I'm starting to like Kansas.

Congratulations, you have rid mankind of the dreaded Krapiums.

—Wow, you did very well. I'm Peter, would you mind to teach me how to shoot? I'm new here.

Hello! The idea for this short story came to my mind thanks to one of my favorite Disney movies ever: Wreck-It Ralph. Hope you liked it.

excellent story, I think you are a player @gabmr

Thanks a lot. Yes, game on! Haha

You post is nominated for „Wold of xpilar“ Community Support Program, @blooming account upvote. Only the posts that are not cross posted, original and posted from community page are eligible. If your post gets approval, then you get upvote within few days. Good luck!

Hello! Oh, gosh, what a surprise. I feel so honored for such a nomination.

Thank you so much😁