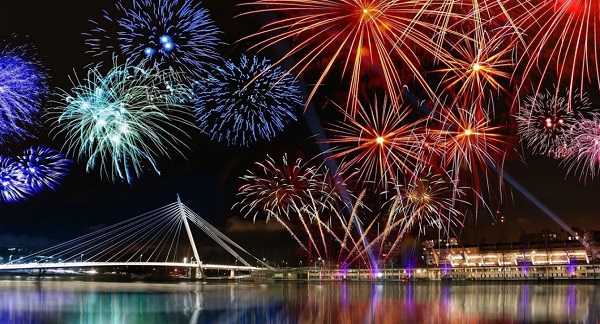 I'm not really expecting anyone to feel sorry for us especially the people that are in other parts of the world that have some level of heightened lockdown against Covid. In Vietnam we have no lockdown at all towards anyone that is currently here. There is no mask mandate unless you go to shopping malls and even then it is just a question of putting the mask on at the entrance and then everyone, Vietnamese and foreigners alike, takes the mask off once they get to the escalators.

I would imagine that the malls are forced to do check by the government but in all actuality nobody really cares if you are wearing a mask or not.

Anyway, this wasn't about masks or covid and I am certainly not trying to create and argument about either of those things. Instead I want to talk about New Year's Celebrations.

One of the main features of this city is the big river in the middle of it and where the 7 bridges connect. 4 of those bridges are very ornate and artistic in their architecture and this is an obvious place to stage the fireworks celebration that is normally a part of everyone's New Year's Eve countdown. Many people from all over the city gather in this area (I don't, I watch from the rooftop of my own building, I'm not getting in that traffic nightmare) to watch the displays and ooh and ahh at the sights in the sky.

I mean, who doesn't like fireworks? I guess dogs don't but everyone else seems to.

People were chatting about whether or not the fireworks were even going to happen this year and some people said yes, some said no, but all of them didn't really have any idea which was true. As the time got closer and closer to midnight there was some anticipation and also everyone having a different idea about when the actual stroke of midnight actually was. Many bars had NYE parties and places were packed. Like I said, there is no Covid fear here but just like the rest of the world there was a time when we too were super serious about it.

So, I am sourcing all of these pictures because I didn't take them. I was poised and ready to do so at the stroke of midnight but look into the distance as I may, nothing happened. There were no fireworks here this year and I don't know why. In many places this decision to not have them would be because the government is trying to discourage people from gathering and potentially spreading the virus. We have no such fears here so I don't know why they didn't do it this year.

I think it might be a question of money - and Vietnam and Da Nang were already relatively poor places that depend a great deal on tourism for their tax revenue and of course there hasn't been any of that this year and even though this country has a laid back approach to domestic travel, they still kind of encourage people to not tour around - or at least they did in the past.

I got involved in the purchase of industrial fireworks one time in my life and was astounded at how expensive they were. A display the likes of which a city puts on for the citizens can easily cost hundreds of thousands of dollars. The small 30 second barrage that we put on with our friends one 4th of July cost us nearly $2000 and it was nothing like what you see most cities put on. Earlier this year when Covid was in full swing the government was actually reaching out to the country's ultra-wealthy asking for handouts stating that the government doesn't have enough money to handle this on their own. So I suppose it is reasonable to expect that they would be tightening the purse-strings a bit on extra purchases such as this.

It was disappointing that it didn't happen, but I can totally relate to why it didn't. The "real" new year for this country is based on the lunar calendar during the Tet Holiday anyway, so maybe they had to make a choice between the two.