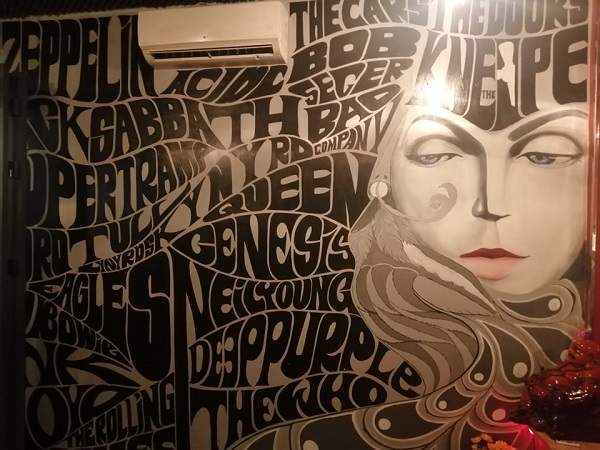 I'm calling this urban art and not street art because it was on the interior of a building. I still consider it to be street art in a way because it would work outdoors as well. It also was painted directly on the walls and can not be removed, only painted over. It ticks most of the boxes that I consider to be necessary for it to fall into a street art category.

I'm a fan of pretty much every band and singer that is included in this, so I will admit that this plays a big part in why it is that I like it. I would imagine that the artist probably marked the wall up with pencil before doing any actual painting, but I do admire the steady hand that was used in getting all of those oddly sized letters just right with a brush. He or she also managed to get around the A/C unit just so. I wonder if it is a coincidence that AC/DC is featured right below the AC unit? I think not. This one has been bashed into by chair backs a number of times which you can clearly see because they are all at around the same level. If I was the owner of this place I would find this upsetting but since it is in a bar I suppose there is only so much you can do to prevent that.

The brickwork on the side is also fake but I like the way that it creates this illusion of there being a cask are in the back when in actuality there are other homes and businesses back there that this shop does not own. I took an art class or two as a youngster and I remember the creation of depth was one of the aspects of drawing that I found most difficult to accomplish.

The next part has nothing to do with art but rather with an accidental discovery. I tend to avoid vegan restaurants because I don't like the "holier than thou" attitude that a lot of them have and also the fact that it tends to be more expensive because it is all the rage right now. 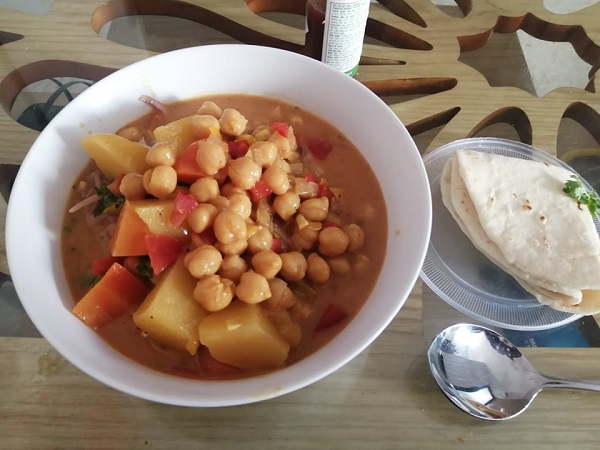 When I saw a sign for "creamy chickpea curry with rice" I was just thinking, well, I like all of those things so why not? It was very good and since I probably dont get enough vegetables in my day-to-day life I'm glad I found something so close to my condo that is actually good and probably at least somewhat good for me.

It is also a tremendous value at just over $2. That same setup would probably be 15.99 if I was back in America. That's one of the main things I enjoy about living over here in South East Asia, food tends to be very cheap.

That's it for now. Haven't heard much out of you as far as street art is concerned @jack.russelle .. you going quiet over there on me?