There are a lot of noodle dishes in Vietnam and the most globally famous one is probably Pho. I know that it was the only one I had ever heard of before I moved here. I don't remember if I ever tried it before I started living in Vietnam, I probably didn't. No matter which direction you head in this city you are never going to be very far from a noodle stand. There are 2 of them within sight of the entrance to my condo.

One day when I was growing a bit tired of always eating Pho I decided to have Mi Quang, even though I didn't really have much of an idea about what it actually is. It's sometimes spelled My Quang or Mì Quảng and to be honest with you I don't know which one is the real one. I suppose it doesn't really matter because they all seem to be the same thing.

All I knew when I was ordering it was that it was something a bit different and I wanted to mix up my diet a bit to have some more variety as my intake of Pho and Ban Mi (bread rolls with mystery meat in them) was constituting a bit too much of my daily diet.

It is kind of up to you how spicy you want it to be and the method of making this happen varies from place to place but mostly you are going to have some amount of those very spicy (to me) chilis available in a small bowl on the table. If you do go this route, i recommend that you be extremely careful with them because they look harmless but they are very hot and once the juice is loose in your bowl, you can't really counteract that flame with anything.

These things (again, to me) are friggin deadly. If you have never tried one I suggest you take a tiny little bite off the end of it before you go throwing it into bowls of anything. It might surprise you how hot they are. In my mind the extract of this chili makes Tabasco taste like milk.

When I asked what Mi Quang means I found out it means Quang Noodles, which wasn't very helpful. Later I did some digging and found out that the "Quang" is actually referring to a region of the country called Quang Nam and this is where the noodle style originated.

The noodles are slightly larger rice noodles than you would normally get in an Asian soup but what really sets this dish apart is the seasoning that is in the broth. I wish I could tell you more about it but I don't really know. What I do know is that this dish is very popular and is available basically everywhere, especially in the central part of the country where I live. 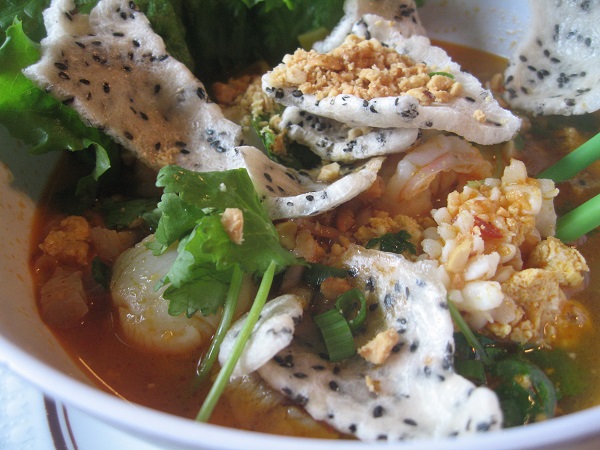 The dish is normally served with sesame crackers and smashed up bits of peanut and that is something that really appeals to me. I like having a bit of crunch in my food and I guess a lot of other people do as well.

So if you have a Vietnamese restaurant in your area but you don't really know what a lot of the dishes on the menu are (I know I don't, and I live in Vietnam) Mi Quang is a safe bet especially since it is up to you for the most part what it is going to taste like. I kind of view it as a "deconstructed noodle soup" with infinite possibilities.