A friend of mine flew into Vietnam internationally recently, and it wasn't great 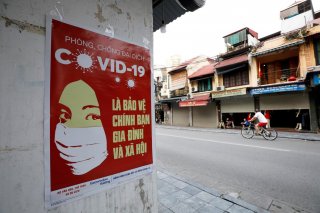 You have to have a very specific and legal reason to get into Vietnam and even then you probably have to wait a while for a flight to actually exist that can actually get you there.

This exact situation happened recently for a friend of mine who is from Los Angeles. She was recruited to be a teacher at a rather prestigious international school in Hanoi and she isn't just your run of the mill alcoholic traveling teacher. Well, I'm not so sure about the alcoholic part but she does have a masters degree in education and 10 years of experience as an educator.

Anyhoo, she was able to get the necessary documentation to get over to Vietnam via Japan and the process was VERY difficult even though the school who has a lot of "pull" with the government did almost all of the paperwork on her behalf and paid for her flight (which was about 3 times the price that a flight would normally cost) to get her over here. The flight she said was actually very comfortable because not very many people were on it which sounds great so far. However, she did say that even though there were only about 50 people on the flight, they still wouldn't allow anyone to upgrade to business class for free - what a bunch of jerks.

She had to take a Covid test 72 hours or less before departure and then take another one that would be processed while she was in the air. If it wasn't for the school footing the bill this would have been very expensive. Then upon arrival they were immediately tested again before being completely isolated from anyone else in the airport other than hazmat wearing folks who ushered the group to vehicles that had been specifically arranged just for them. Upon reaching the quarantine area, they were tested for Covid again and then sent to their rooms that she had to share with a stranger.

These were not nice rooms either and she said she was a little bit upset with the rather affluent school for not providing her with something a bit nicer. It was a 12 x 12 meter room with two beds, a single toilet and a 20 inch television. The worst thing was the fact that they were not allowed to leave the room under any circumstances, except to go out to the fire escape to smoke. This is where the various inmates would socialize, even if they didn't smoke.

I think I would have a difficult time not losing my mind in that situation, especially once she informed me that the wifi was very spotty as well and they were subjected to standard Vietnam television which as you might be aware has about 8 channels in English.

They were tested every other day for Covid by someone coming to their room with a hazmat suit on and it's a good thing that she got along with her roommate, because in that small of a place, things could get ugly pretty fast I would imagine.

She later told me that when they were finally released from prison that she felt as though it was one of the best days of her life. I can imagine that I would feel the same because even though I went through some level of covid restrictions such as restaurants being closed and what not, I was never restricted to the confines of my room.

So the moral of the story is that if you are capable of getting into Vietnam for some reason, you should really check with your sponsor about what your accommodation is going to be like when you get here. She is a very well paid teacher and was basically put in prison for 2 weeks.