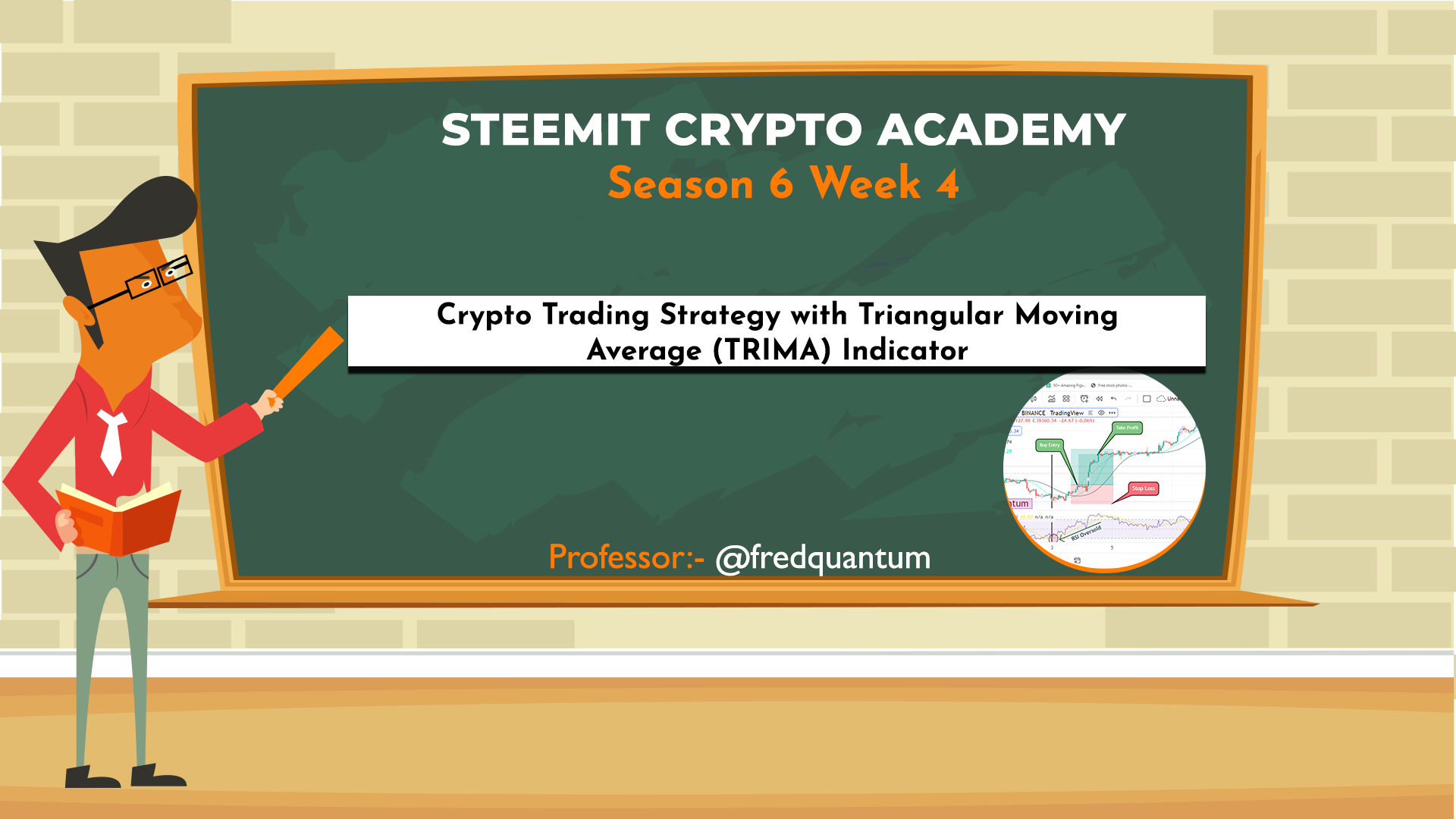 It's the fourth week of Season 6 at the Steemit Crypto Academy. The season has been running smoothly so far and crypto courses have just resumed after the trading competition that just ended after two good weeks of practical trading. In today's lecture, I will be sharing another great trading strategy with you and I bet you'd have a great time attending the lecture. Stay with me on this as we roll together.

Background to the Study

Technical analysis stories in the crypto ecosystem can't be complete without talking about moving averages, they are predominantly trend-following indicator used in the technical analysis realm to monitor the behavior of assets' prices on the crypto chart over a certain period. They are lagging indicators and this implies that they consider the price history of an asset to present the current situation with their position on the chart and not too suitable for predicting the future price of the asset under study but can adequately give an overview of what has happened and how it tends to happen again.

Triangular moving average can be said to be double-smoothed from its double-average of the price of the asset and present its line in a more clear wavelike form. TRIMA is a very useful indicator that eliminates the quick reaction of indicators to high volatility crypto markets, as such it's associated with the delayed change of direction in a situation like that, in addition, it is a more suitable form of moving average that clearly shows the trend of an asset on the crypto chart enabling trend traders to easily identify the trend state of the market to plan entry/exit in the market of choice.

How to Add TRIMA on the Crypto Chart

To add TRIMA to the crypto chart, I will be utilizing the popular charting platform https://www.tradingview.com/chart/ to conduct the adding of the indicator on the chart and analysis.

The Formula for Calculating TRIMA

Remember when I was opening the basis to TRIMA, I highlighted how it was built on SMA, as such it's the double-average of the price of an asset, in other ways, SMA further averaged to produce a double-smooth. As such, SMA would be used in the formula for the calculation of TRIMA. Let's take a look at the formula below.

Now that we have gotten the formula for SMA, we can easily insert its values into the formula to get TRIMA.

The identification of an uptrend in a market can be easily seen but traders' settings can further alter how easy/hard the visual detection of the trend is. In short, very short periods tend to stay too close to the price, and sometimes you might not see the market condition clearly enough. In an uptrend condition, the price of the asset would be clearly seen at the top of TRIMA without both entering each other.

Prices of crypto assets enter a consolidating market whn there is no disstinguished uptrend or downtrend, in essence, no trend situation. In consolidating market, TRIMA would be seen immersed within the price of the asset, moving in and out of it. This movement takes place when the trend is not clear in an asset's market.

From the Bitcoin chart above, you can see a consolidating price movement and the TRIMA line was seen entering in and out of the price, that's the movement of TRIMA in such market situation. The movement persisted before a break uptrend when the TRIMA line finally appeared below the price to confirm an existence of an uptrend.

TRIMA is designed to be double-smoothened such that it does not react quickly to market situations, such as in highly volatile market. In that case, if a trader chooses to base his/her entry on the movement of TRIMA, the market might have moved before TRIMA reacts to a change in the market of the asset under study.

To take care of such occurrence, two TRIMAs would be combined on the crypto chart, one at a shorter period and the other at a longer period. As such, crossovers that exist between the two indicators would be utilized for buy/sell entry. Let's take a look at the different scenarios below.

When the shorter period TRIMA crosses over the longer period TRIMA, this is an indication of an uptrend underway, as such this crossover can be utilized to make a buy entry and this must be done with proper trade management to keep the trader in a safe zone of investment.

From the chart of BTC/USDT on 1 hour time frame above, I have combined two TRIMAs, one at 10 periods and the second one at 20 periods. The shorter period TRIMA crosses over the longer period TRIMA and the uptrend began which opens a buying opportunity for traders. You can see that the uptrend was a strong one.

In preparation for a sell entry of the market under study, watch out for the longer period TRIMA to crossover the TRIMA on a shorter period. An occurrence like this signifies a downtrend underway and opens a sell opportunity to take some profit in the downtrend movement of the asset.

Also, on BTC/USDT chart in 1 hour time frame, two TRIMAs have been combined. The longer period crossed over the shorter period and this is an indication of a downtrend that opened a selling opportunity. If you take a look at the chart, the downtrend moved extremely from that point.

Note: In a consolidating market, TRIMAs can be seen crossing over and below each other at regular intervals, do not utilize such crossovers for buy/sell entry rather verify every crossovers using suitable indicators. We would discuss one in the next section.

A lone TRIMA indicator might not enough to trade reversals for the fact that it might take some time before it reacts to the price behavior, as such, it is required that it is combined with other indicators to trade reversals. The indicators to be used is one of its kind, that is another TRIMA indicator to make it two TRIMAs (one at shorter period which monitors price closely and the other at a longer period), and RSI indicator would be combined as well.

From that chart above, after a downtrend market movement, the price of the asset has a consolidating movement, RSI has hit the oversold level and its oscillating line is changing direction. Around the consolidating region, the shorter period TRIMA crosses over the longer period TRIMA and I made a buy entry after the crossover.

Likewise, in the chart above, the price of the asset was consolidating when the RSI has hit the oversold level which is associated with a trend reversal, the longer period crosses over the shorter period and this is an indication of a bearish reversal. I made a sell entry after the crossover as the price continued in the downtrend direction.

In conclusion, the Triangular moving average (TRIMA) indicator is an innovative development of the regular simple moving average (SMA) which operates by double averaging the price of an asset over a specified period to produce a double-smooth of the representation of its line on the chart of the asset under study. It's not too effective to use TRIMA alone to make buy and sell reversal trade decisions because the market might have moved for some time before the indicator give a clear indication, nevertheless, it's a strong indicator for trend traders.

In this piece today, I have discussed a few ways to filter crossovers of TRIMA to make buy/sell entry, and one which was discussed is how to utilize RSI indicator's oversold/overbought to make bullish/bearish reversal entries in a market, nevertheless, this is not the only indicator that can be utilized for the purpose, traders should consider laying their hands on other momentum indicators as well. Thanks for reading through the lecture today.