Back On Ice (Original Photography) 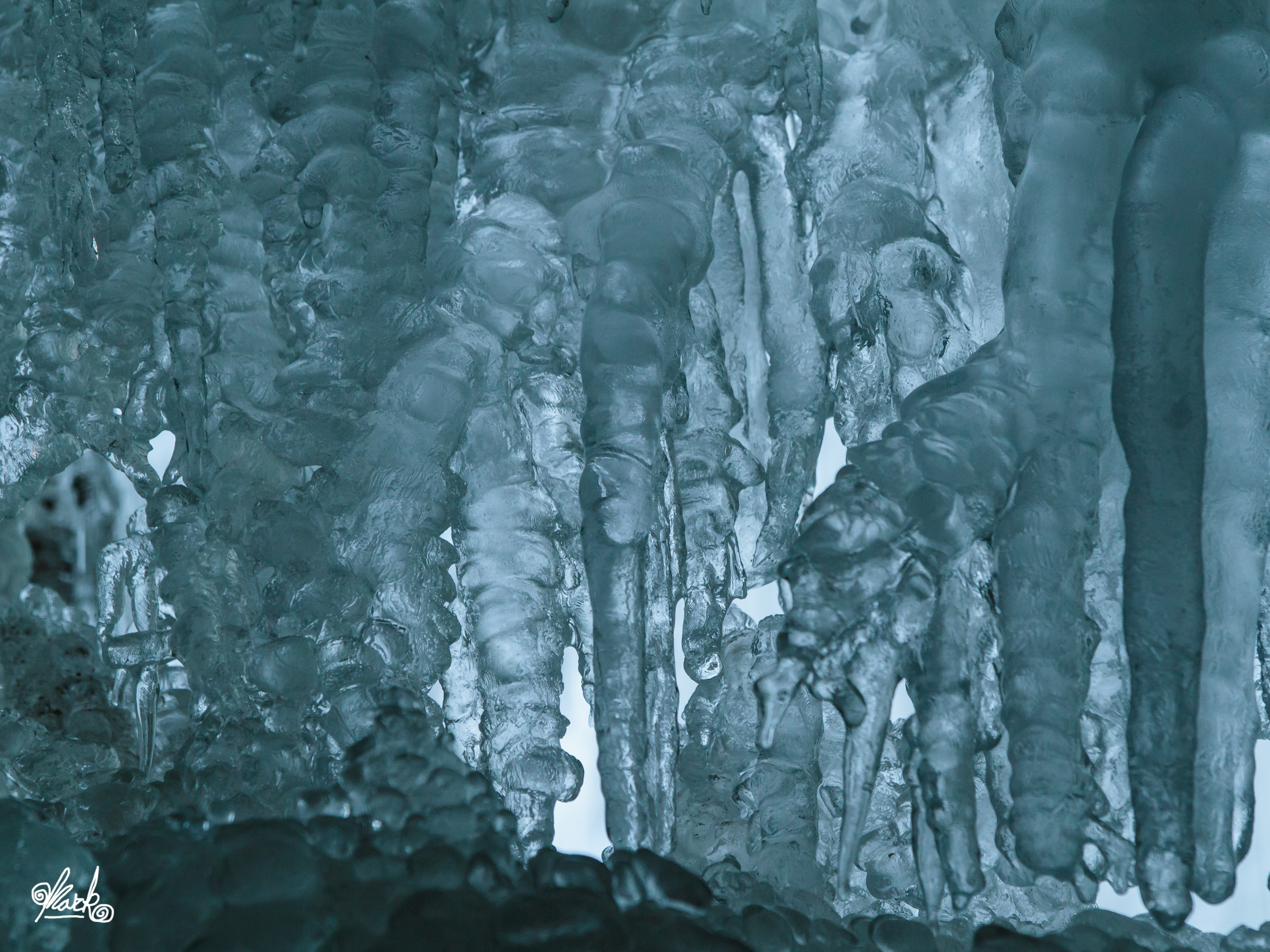 It's been awhile since my last post. I headed back to Rochester for the holiday break and decided to focus on more present issues. It was nice to see my sister and family. I have also been a little less than inspired with my surroundings, lately. It would be nice to be able to go somewhere new to photograph, but work and resources prevent this for the time being.

My previous posts were mostly of the ice formations below Triple Falls, in Mankato MN. Last weekend, I decided to go see how the warm weather had changed things. It is really quite interesting how much the formations can change in as little as a couple days of warm weather. A week or so of above-freezing temps have an even greater impact.

Being close to huge, heavy ice formations that are melting is dangerous. I'm always conscious of this and listening for the sounds of cracking ice or running water that could forewarn a collapse. And, if I do get killed by a huge chunk of falling ice while taking photos, that's not a bad way to go.

While I was taking photos, though, a group of about eight kids and two adults showed up. The kids were pretty good around the falls, but I couldn't believe the parents let them go behind. Risking it as an adult, with knowledge of the danger is bad enough. 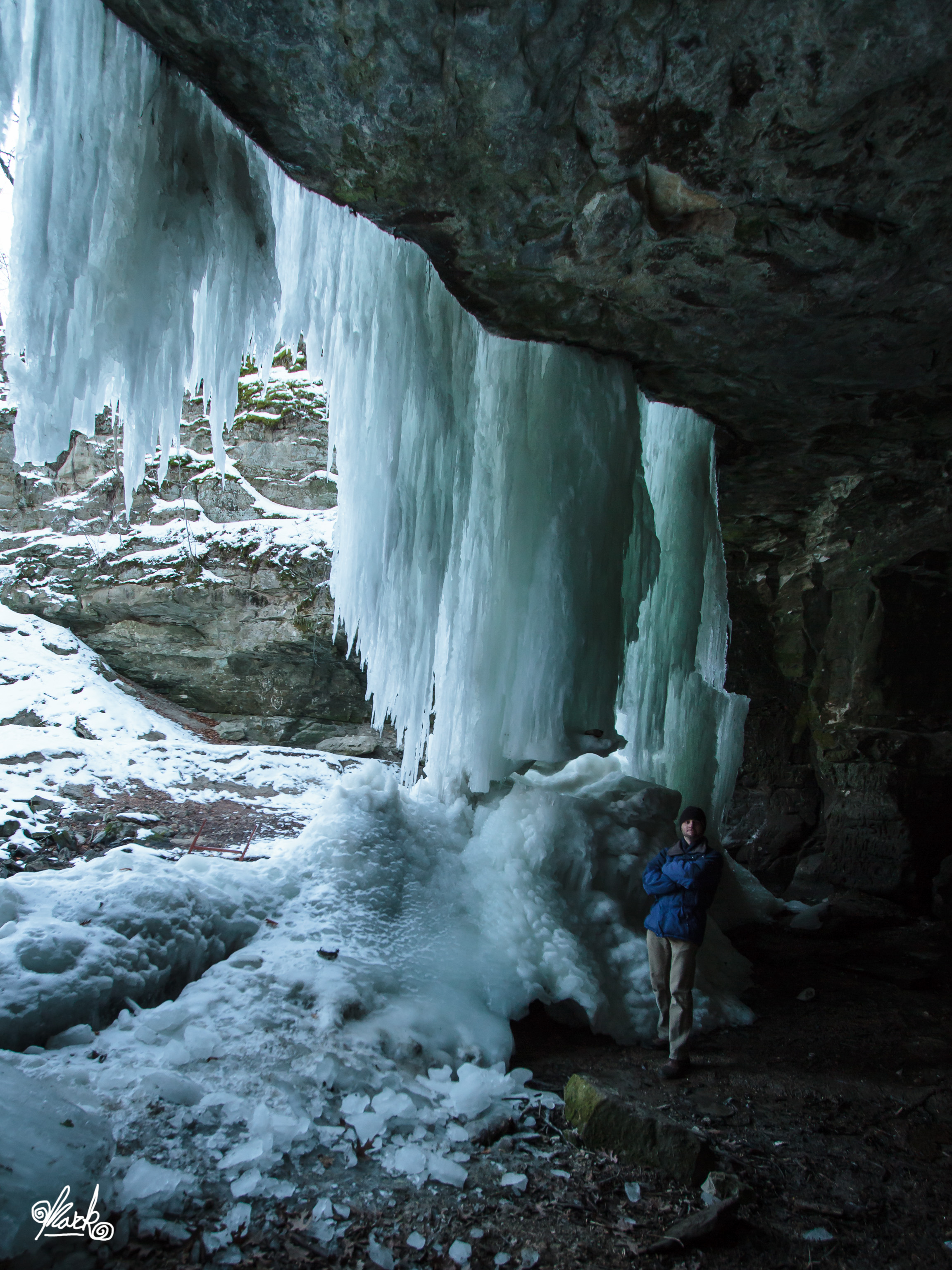 The last photo should provide some scale. It was taken fairly wide (10mm), so there is some distortion, but you can see that the overhanging rock is roughly three times my height. 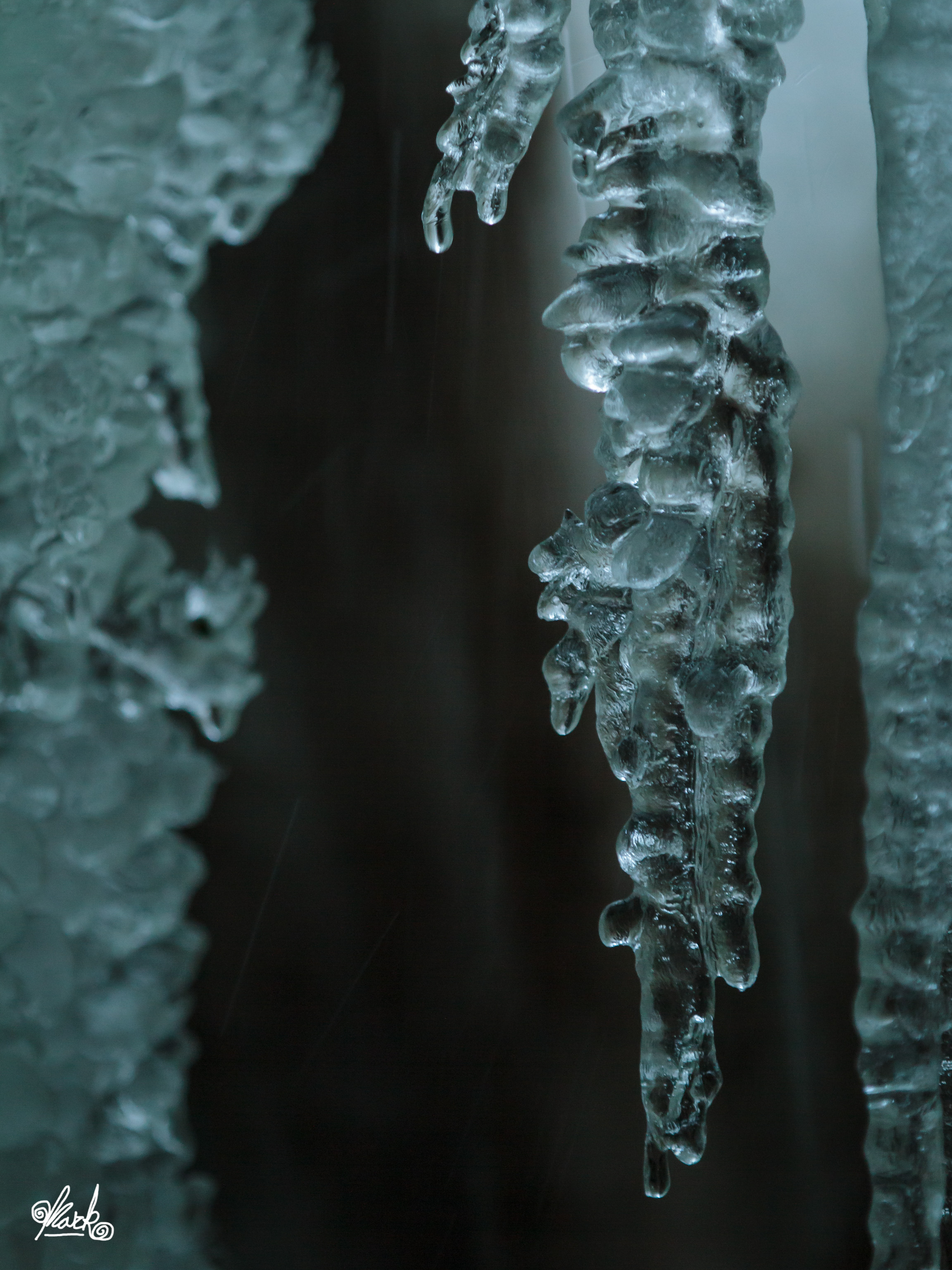 This time, there was the metal base of some sort of desk left right in front of the waterfall. Forget why people dump there. I want to know how they got it there. It took effort to throw the huge hunk of garbage into the base of the waterfall. If I were a member of the club that owns the land, I would mount trail cameras and start prosecuting these people for dumping. 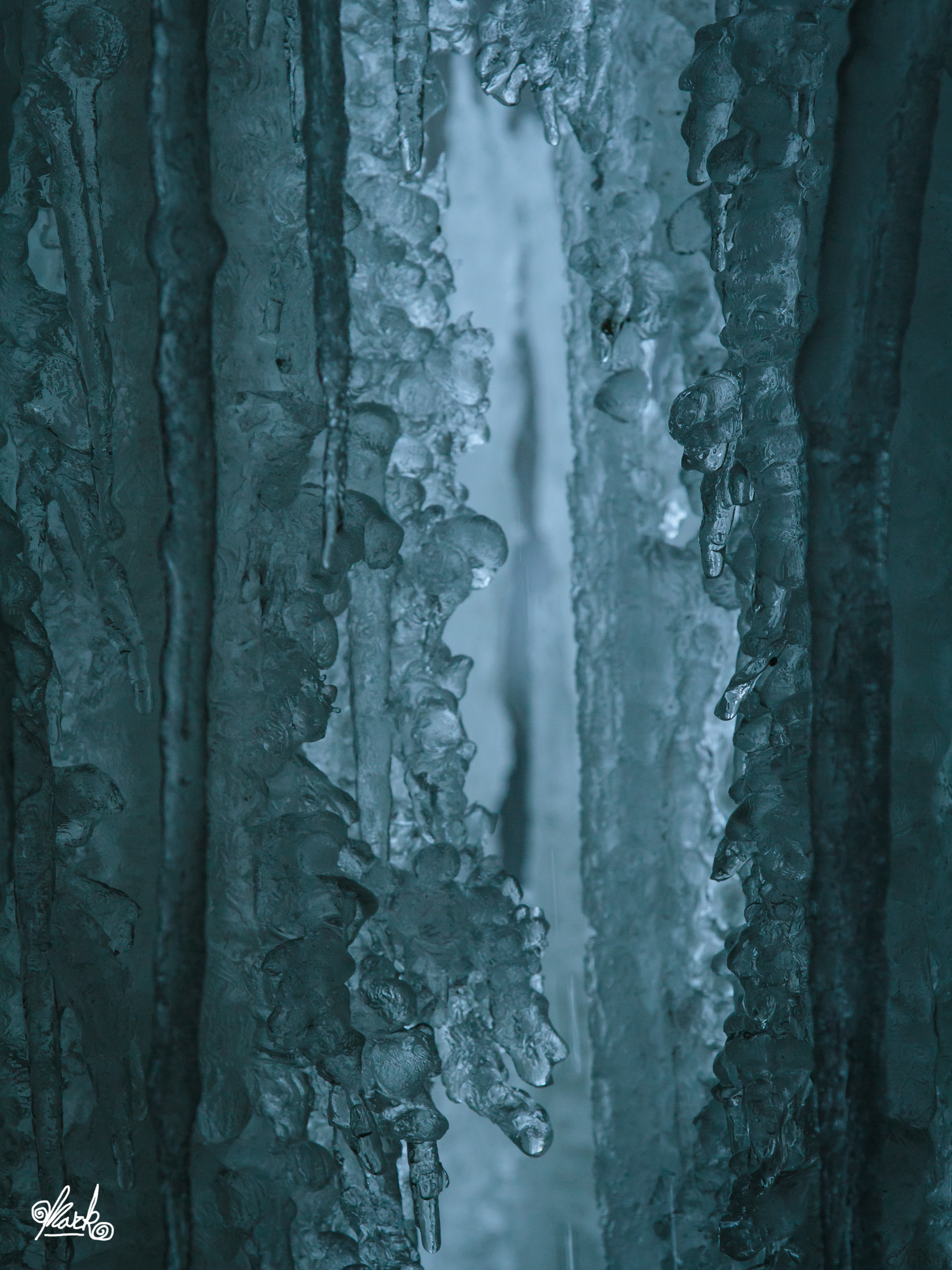 Wet ice is different than the ice I've photographed here in colder weather. The melt almost seems to pollish the surface of the formations, making them more transparent and bright. On this particular visit, the morning had been cloudy. If the sun had come out a little earlier, I may have been able to get some interesting prism effects. The gorge points northeast, though, so little sunlight actually hits the falls during the winter months. The blue, then orange-tinted sky provided a nice, diffused glow, which is pretty in its own way. 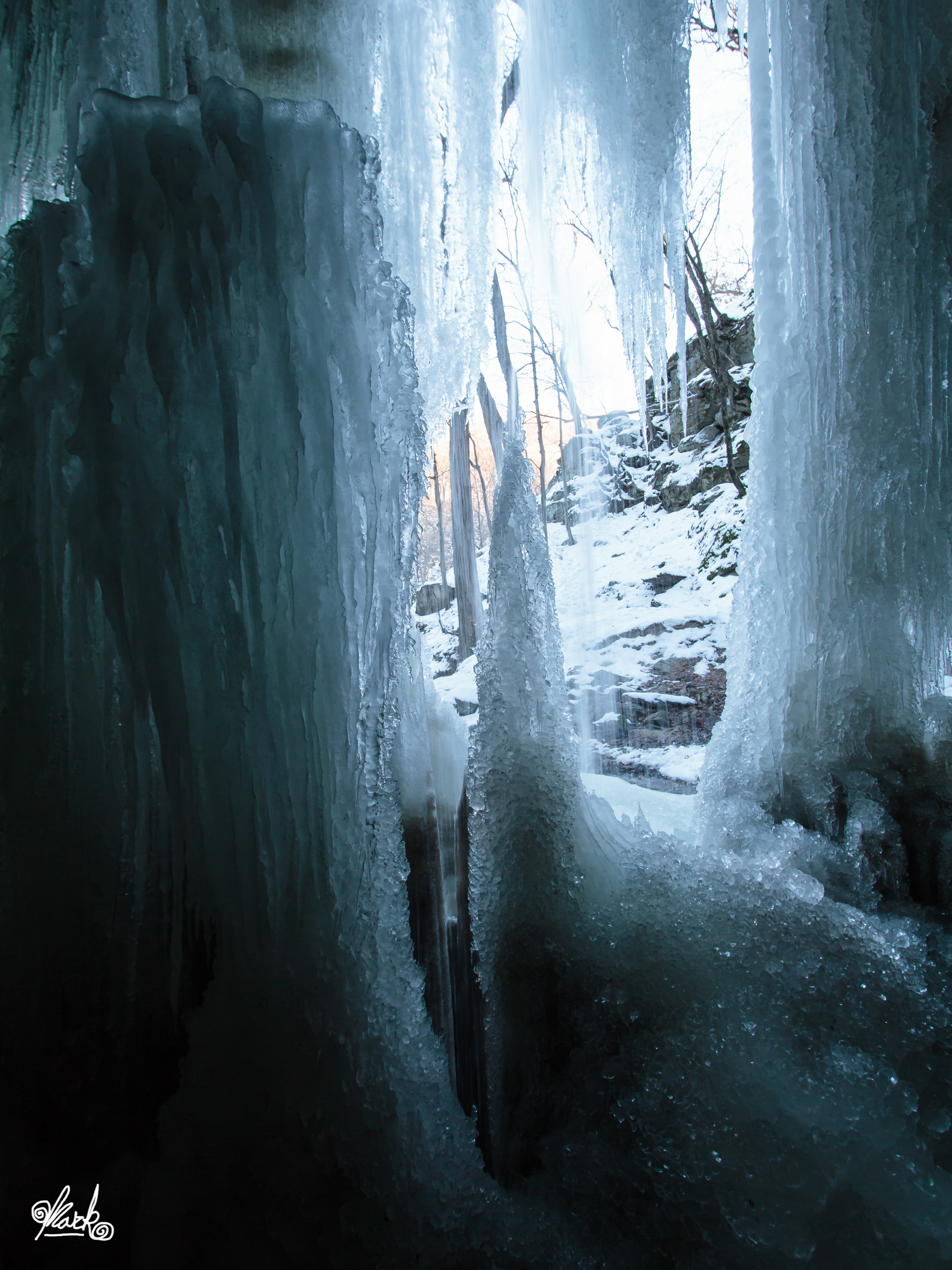 As for life in general, there isn't much going on. I have begun taking care of the cats for the people I rent from, while they stay at their new house in Mexico for a few months. The cats are pretty good, for the most part. One of them seems to be part dog, enjoying being held and tummy rubs. Weird, right? Within the first twenty-four hours of being in my care, they have "allowed" me to clean up vomit, feces, and urine out of the carpet. Here's to hoping that is over with... 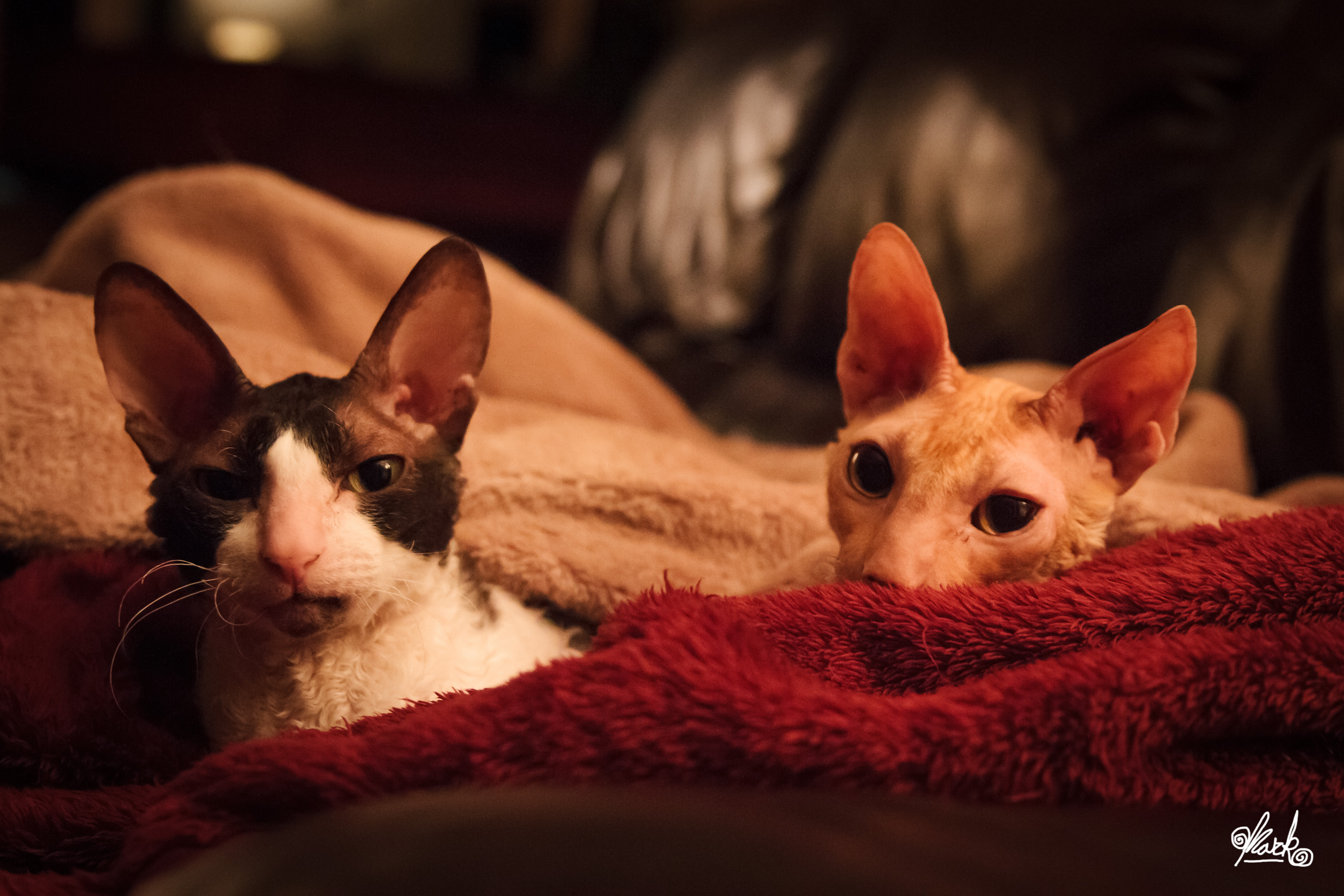 Beautiful ice scenes! I am lacking photo inspiration, too. Seems I have already taken photos of everything in the neighborhood. Traveling anywhere would be wonderful, but that is unlikely to happen, so, like you, here I am!
Fun for you to have new animal friends! Cute photo!

Thanks. I definitely agree with the traveling sentiment. Spain is sunny and warm right now.

Haaaaa those are not pretty looking kitties lol, especially with what they allow you to do with them. But, I have to say that they are photogenic! Wow, 1 is bad enough but 2 lol. But on the upside, at least they aren't long haired and hide under your bed to vomit repeatedly...or do they do that anyway lol.

Looking fwd to some interesting photos of those 2 :)

They seem to be better now, though I have had to clean plenty of vomit off of the tile and spot-clean pee off of the carpet at least three times. I harassed them with the camera, though. It was partly to have a subject... And partly sweet vengeance! Lol. They weren't too annoyed at the camera following them around.

Howdy sir fotosdenada! What a great selection of photos and that second one is perfect for showing the scale, wow! I wasn't thinking it was that big. I agree about the dumping issue, that's disgusting.