It's official. The snow is here and it's not likely to melt in the near future. I'll start with a photo of the scene from last weekend, when I made the trip to see the bison out in the local state park. A chill was definitely in the air but, aside from an early snowfall that melted the ay after, we had seen little more than rain showers.

The bison herd wasn't right next to the road, but they were close enough to get some nice close-ish photos. These two were drinking from the same spot. They also like to use the pool as place to relieve themselves, so one must wonder how the water tastes... Yuck.

Then the snow arrived! 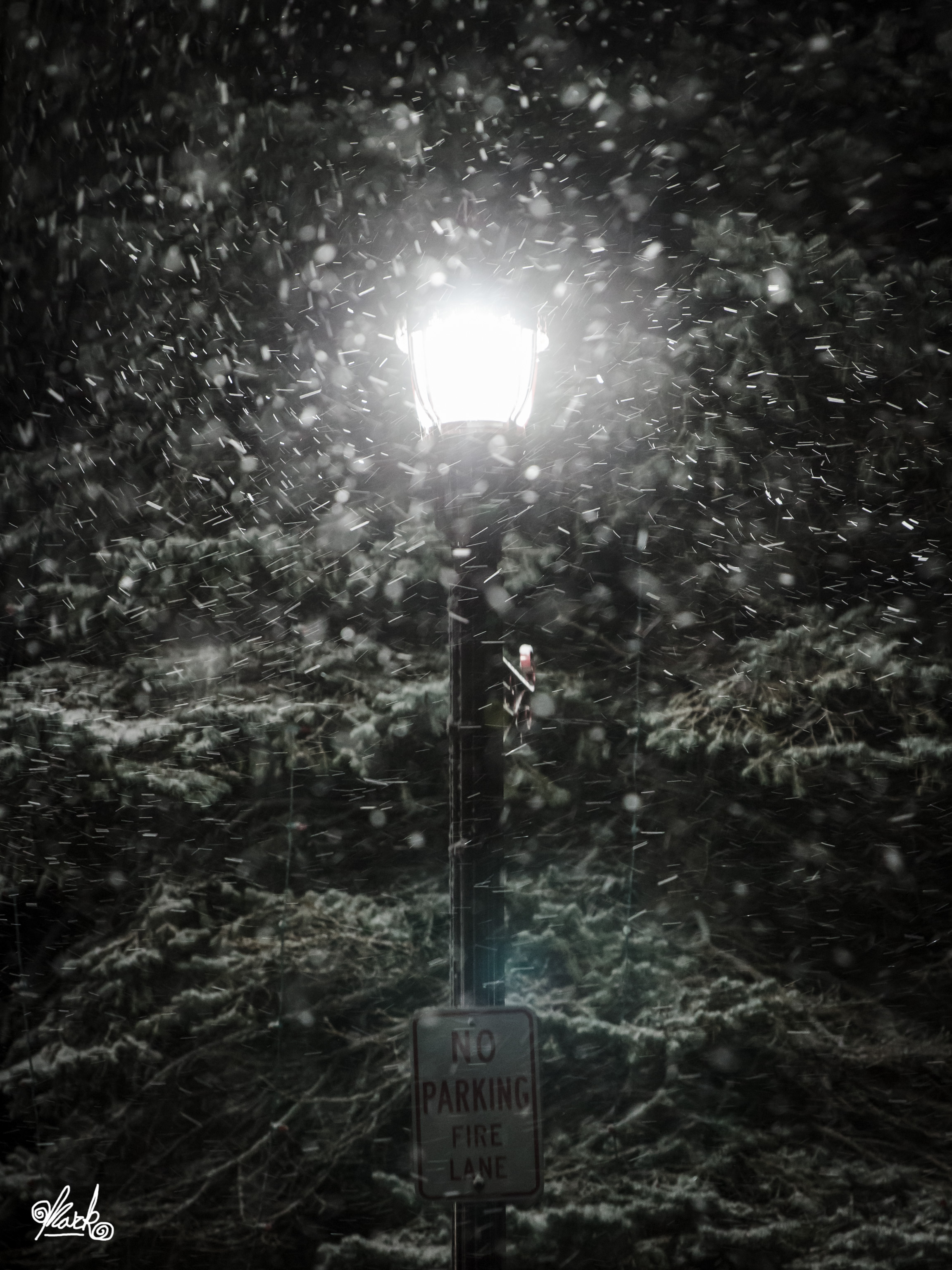 The drive home to Rochester for Thanksgiving was mostly clear, but I did run into a section where snow had drifted over the road. There were multiple vehicles far off the road. The first one must have been travelling well over the speed limit, as their vehicle was not only in the ditch, but in the farm field. I almost wanted to pull over and take photos of that. There were already police and a tow truck on the scene, though.

Anyway, back to the bison. I got back from Rochester today and went to see the bison who, this time, were in the road. Maybe they found it easier to travel along the gravel span, rather than the cy underbrush.

The driver of this one was really nervous, when a huge bison mama walked up and gave her an eye-to-eye staredown! She also came to visit my Jeep, leaving her mark of approval in the form of a tongue-smear on my front bumper. On the topic of bison, I entered a photography contest that a group affiliated with the state park puts on every year. It is a very small contest, with only forty photos submitted this year. A portrait I took of a bison with snow on her face took first place. I hope to get to the public library, where all the entries will be on display, to see some of the work others submitted. 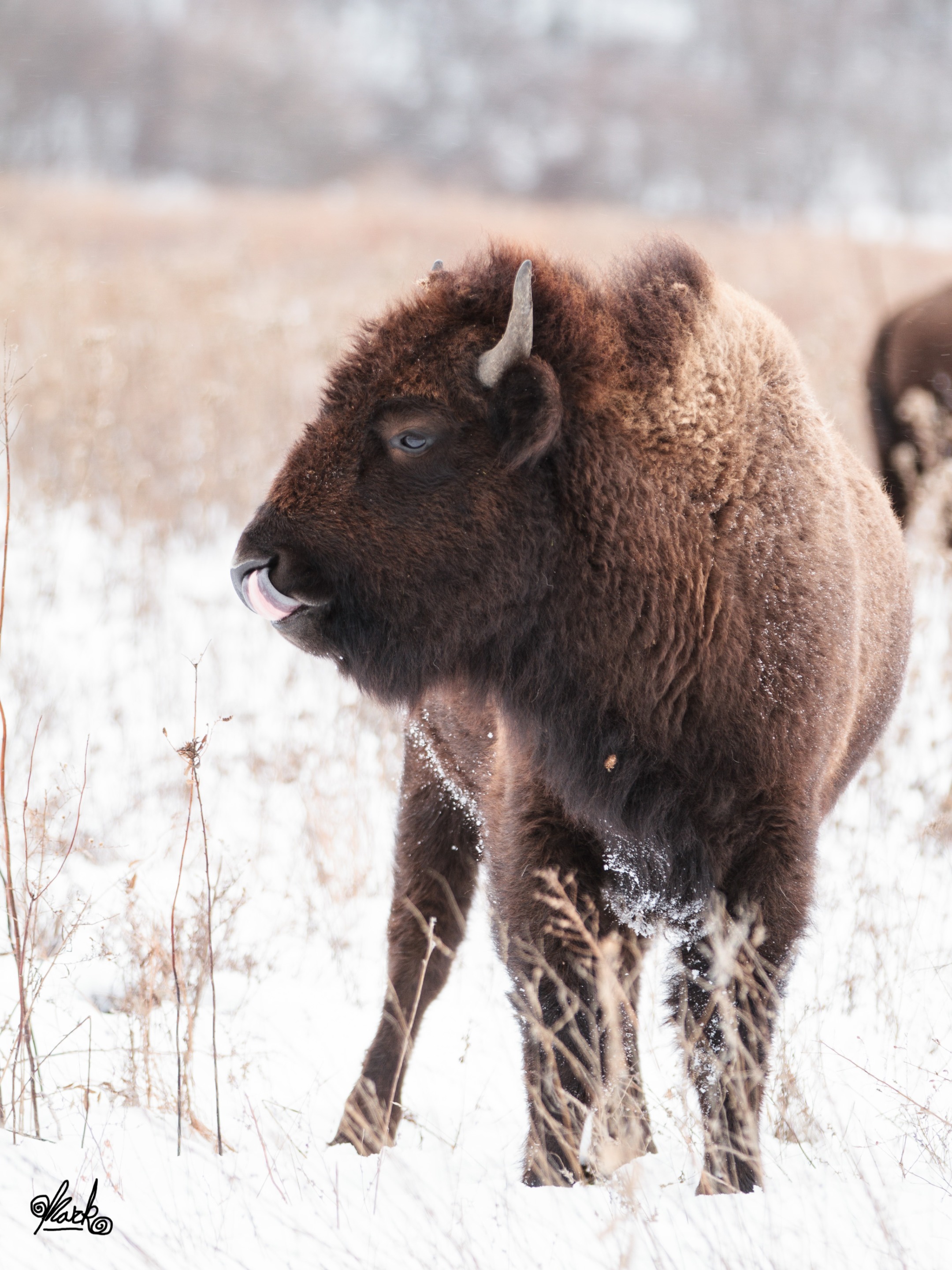 And with that last photo...

How great to see the bison so close. Great pictures and congrats on the first place!

Congrats on your well deserved contest win! I always love seeing your bison photos! We were on the edge of the latest snow blast and got some icy roads and flurries, but no accumulations. !Tip

Thanks! It's fun to see them so close, too. Maybe not as close as that lady in the Chevy, though :-)

I really enjoyed this post :) Although, I don't think I would have been able to resist taking photos of that accident, lol Love, Love the bison even if they pee in the water they drink (ew)...why do animals do that? Oh, and lets not forget that last photo, lol

Thanks! The bison don't just pee in their watering hole... Lol. Well, they're not doing either as of the weekend. The pond has frozen over.

lol. Had to mention that late last night I realized I missed out on...I LOVE LAMP!! hehehe

Lol. This one came off a bit Narnia-esque!

Howdy sir fotosdenada! What wonderful animals those guys are! I didn't know they were loose to get right up on the road like that, how are they fenced in? Anyway, great photos and very interesting!

Howdy! THe enclosure was created by the same guy who designs the enclosures at the Minnesota Zoo in Minneapolis. The fencing is not electrified and doesn't look nearly strong enough, but they haven't escaped yet. I'm sure he knows what he's doing, and the wire is probably plenty, but if a bison decided to charge me on the other side of the fence, I'd still scamper. There are cattle guards on both ends of the road.

This was the second time my vehicle has been licked by a bison. One was licking road salt off the back bumper of my old Ford Ranger (R.I.P.), and I had to rev the engine to scare it off. My guess is that road salt isn't the safest thing for them to ingest. The big lady that licked my Jeep bumper on this occasion just took a wet-slimy swat and then went on her way. Maybe it's the difference between metal and plastic bumpers? lol

Haha! It sounds so funny to have them licking your car! But that road salt makes sense. Yeah I'm not sure it would be okay for them or not, sometimes they add chemicals don't they?