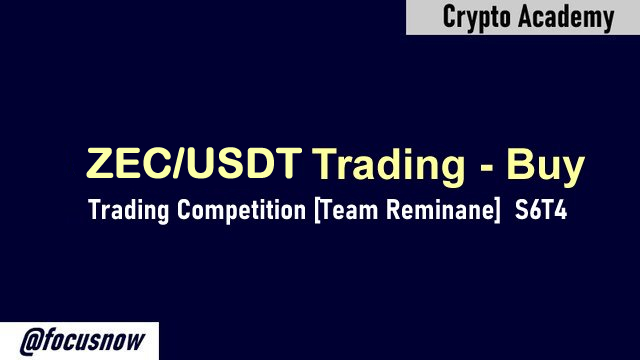 Hello Friends, it's my pleasure to enroll into this week's trading competition as I joined TEAM REMENANE where I traded ZEC/USDT on Binance Futures. Thanks for patiently going through.

The name and introduction of the project token, which exchanges it can be traded on, project / technical information of the coin/ team background, etc.

This project token was invented in 2016 by an entrepreneur and a computer security expert called Zooko Wilcox-O'Hearn. According to history, he has spent almost 25yrs in the information and cryptography industry and has also contributed to a reasonable number of good projects like: Digicash, Mojo Nation etc.

Nevertheless, this token has for-profit Electronic Coin as the company managing the Zcash token project has it's operation in a decentralized way with the mandate of maintaining high level of privacy and anonymity. Zcash uses a Proof of Work (PoW) algorithm with a Hash function belonging to the SHA-2 algorithmic set.

Major exchanges where this token could be found include but are not limited to the following even as displayed on the screenshot below.

Technical view of the Zcash token

This is a 24hrs trading chart of this token and a clear view of its price action indicates that the token is currently in a devalued price condition.

Statistical view of the token

Why are you optimistic about this token today, and how long do you wish it could rise?

Although I lost my trade on this token, I'm optimistic about it because its price is currently down and hence, many traders can take advantage of this and make a good sum of profit when its price goes up again. Moreso, a greater benefit of this market situation accrues more to spot traders as scalpers and other forms of traders can also benefit from trading at strategic points.

How to analyze the token? (This can be technical analysis and trading strategies learned from professor's courses) - This section is very important.

There are basically two ways to analyze a token and these are: fundamental analysis and technical analysis.
But precisely, I will be analyzing this token using the technical analysis medium in 5min. time frame by practically deploying the MACD, Bollinger Bands and RSI on Binance futures.

In the case of the Bollinger bands, this indicator is actually a chart based Indicator that basically dictates the market position of an asset using its upper band, lower band and middle line. Where in an uptrend, the price action takes market dominance at the upper layer of the Indicator while its middle line serves as a support. Also in a downtrend, the price action takes a strong position within the lower level of the BB while its middle line acts as a price resistance.

On the other hand, the RSI which is a momentum signaling Indicator that has a default function where within it's 30% and below, it has the tendency to influence the price action in reversing to the bull while at around 70% and above of its movement, it has the certainty of manipulating price action in turning to the bear again of which it may be a long or possibly a short bear reversal.

Nonetheless, I practically analyzed this token without first taking a day view of what has been happening in its market which actually made me to accrue some losses.

But in my first view, I took a 30 min time preview of its price action and this indicated that its price has devalued and hence is currently rising. I then went further to check using 5min and on my view, the RSI was making a little bullish movement with the MACD already depleting which I predicted that would be a bull trend continuation, but my prediction wasn't accurate and finally using the Bollinger bands, I predicted that the signal it was making was a consolidation to push further to the bull but the reverse was the case when the price action started taking a strong downwards movement as against my set strategy. and

Finally after all my analysis, I opted for a buy position and then lost connection of my network without setting my risk management but when I was able to gain connection again, the trade has already gone against my prediction and then made a reversal and finally from the signal of the MACD, and intended going bearish again, so I layer it off to avert further losses.

Your plan to hold it for a long time or when to sell.

I never intended holding this token for a longer period since I trade as a scalper, but though I incurred some losses, I laid it off after it intended to take another bearish reversal according to the signal I got from the MACD.
Finally from the trade, I purchased at $197.90 and layed it off at $196.63 and incurred a loss of -$0.70

Final trade position before lay off

Binance
This is my final trade position before layoff

The screenshot above shows my trade history

Do you recommend everyone to buy this token? Give reasons for your answer.
Any other thing you might want to share about this coin/token.

Although I lost some values in the course of trading this token, but contrary to this occurrence, I would advise any trader that intends buying this token to hold on first till a strong bullish trend is spotted again. Moreover, the BTC which is the leading token has taken a little rest from its strong bullish movement since the past one week and is currently positioned at $47,000 and it is uncertain what might be the next price action.

It is good to always take a proper market analysis of any trade one wishes to engage in but depending on the type of trader one is, especially as to observe whether the market condition has either been bullish or bearish within one's time of view as to accurately initiate a favorable trade and also to mitigate against irrelevant losses.