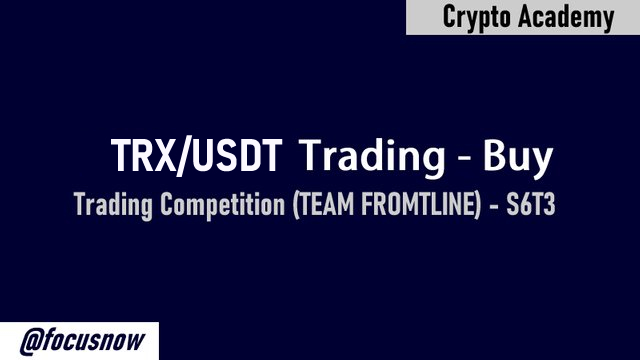 Hello Friends, today I will be expounding on the TRX asset in line with the incredible direction of TEAM FRONTLINE. Thanks to our amiable professors for such an opportunity in exercising what this community has embedded in me so far.

The name and introduction of the project token, and which exchange can be traded on, project/technical/team background, etc.

The project I will be discussing today is the Tron (TRX) token.

This project was adopted by a technology entrepreneur whose name is Justin Sun in September 2017 who is presently serving as the CEO of the company, with the project having a 10 year road map. From the inception of this platform, he was able to raise $17 million from initial coin offering (ICO) of the project, while the mainnet was launched in June 2018 and now it has risen to the top 20 cryptocurrencies according to its market capitalization.

The tron ecosystem uses a delegated proof of stake (DPoS) mechanism where it has a total network of 27 super representatives who helps in verifying transactions in its blockchain.

This project is built on a decentralized internet technology where users are not restricted from accessing it either geographically or otherwise, and this success was as a result of certain features like it's on-chain governance, high scalability with a network of 2500 TPS (transaction per seconds), and a well fashioned ecosystem.

Finally, this Project has over 100 billion total token supply. In 2017, private investors was allotted 15.75 billion TRX, 40 billion TRX was given to participants of initial coin offering (ICO), The Tron foundation took 34bn TRX and a company owned by Sun received 10bn nevertheless this meant that 55% was allotted to investors why 45% went to the project foundation.

Technical Analysis of The TRX Project

24-Hrs Trading Chart of The TRX

From the screenshot above, we can technically state that this token has been on the bull using a 24-hour overview.

Exchanges where the TRX can be bought

From the screenshot above, indicates that the following exchanges and more are the places where this token can be purchased as it includes: Binance, Poloniex, Kucoin, Bitfinex etc.

Why are you optimistic about this token today, and how long do you think it can rise?

Really, I love seeing the greenish state of the cryptocurrency market and besides I am very optimistic about this coin because it is currently on the bull and in other ways every trader can actually gain from its current trend whether you are a spot, scalper CFD trader etc. On the other hand, I can't really predict how long this token will rise but what I can assure is that once it gets to a strong resistance point, it will definitely take a bearish reversal.

How to analyze the token? (using the analysis knowledge learned from professors’ courses) - the most important part.

Finally from the assertions above, we can conclude using the two technical indicators which are displayed on the screenshot, that the day's view of the TRX asset is bullish since the upper graph of the MACD is in absolute dominance and also the green line of the fisher indicator positioning above its gray line.

Do you intend to keep it for a long time or when to sell it?

As I will keep upholding and accepting the proposal that "no trend will be in a perpetual state". On the other hand, as a scalper I don't keep coins for long as I only spot strategic and profitable positions and trade off some profit after which I exit the market.
We can see from my illustration below, the point where I purchased the assets and the position where I laid it off after making some profit using a 1min time frame after the indicators I deployed started giving signals of what the market intends doing.

Finally I normally trade with the RSI and MACD, and I prefer entering the market for a buy option using one minute whenever the lower chart of the MACD starts reducing while the RSI is taking a bull.

On the other hand, I then turn to 5min to see the longevity of the trend, after which I sell when its 5min MACD upper chart starts diminishing. This is how I normally trade using the two indicators.

From the screenshot above I entered the market when the MACD and the RSI were making a bullish movement and finally sold when the MACD started diminishing which is a bearish indication with a 1:1 risk management system.

At the time of taking this screenshot, my trade position indicated that I have scaled up to a 4% profit increase after which I shut the trade.

The screenshot above indicates the history of the trade which I performed with regards to the TRX asset.

Yes I would recommend everyone to buy this asset because it has a very high market capitalization which in other ways, it maintains a good capacity in filling traders orders in the market and more so, most assets are currently bullish which is also the case with this asset. So buying this coin today will profit most traders who may be trading on spot, future, margin etc.

Anything other users want to share about the token/project.

I have already mentioned everything that I needed to say but what I would further advise is that every trader should trade this asset very judiciously and meticulously especially future traders CFD traders, margin traders etc and finally spot traders against losing your asset as every crypto market stands volatile as it can deep or hike at any time and finally always trade using an indicator which you are very familiar with thanks.