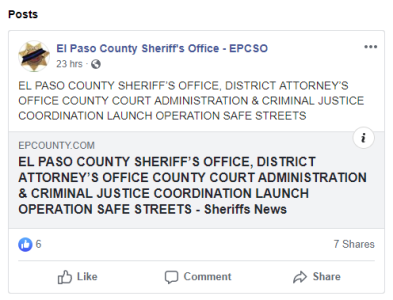 The Corpses aren't even cold yet, and everyone is an expert about whats going on in El Paso I guess. Not even Patrick Crusius at last look is listed in the inmate database yet. Strange considering how late it is at night, unless he went to the hospital.

Early reports said there were multiple shooters, 3 suspects in custody. Now we are beng told there was a single shooter, that attacked the Cielo mall and the el paso walmart. There is still some residual reports about 3 suspects, and such reports are being purged [corrected] but a few remain. https://wwl.radio.com/articles/radiocom/multiple-people-killed-after-texas-shooting-officials . Reportedly "[Mayor Dee] Margo said three suspects are in custody and that there is currently no threat to the public." per the radio url.

And the points to a new story.

It looks like an aweful lot of ground to cover by one individual without anyone running away and warning others. I mean its not too far away, you'd think you could hear an ak-47 going off from half a mile to a mile away.

You have gun owners self reporting gun shots can be heard 2-6 miles away.
https://www.ncgunowners.com/xf/threads/distance-gunshot-sound-will-travel.39210/

Reported he left a manifesto where he expressed a bunch of anger at illegal immigrants crossing the southern border. She he naturally concluded the best way to stop this was shooting innocent Americans in a wal-mart. If we buy that the manifesto is true, and I am not saying it is, it shows he has the problem solving skills of a gnat. In the end if this was his theory, qui Bono? Who benefits. Politically he hates both parties, particularly how democrats will give away America's wealth instead of dealing with its own problems.

So basically the socialist rhetoric of the democrats caused him to go Cwazy. BUT. He seems more like a hybrid on Bernie Sanders and Andrew Yang, maybe a little Al Gore. He knows American can't keep paying for the worlds health care(sanders), he supports the second amendment (Bernie), he welcomes in complete automation(Yang), and universal basic income(Yang), and he cares about the environment(Gore). Of course, assuming the manifesto is true.

Now what I find interesting for this so-called white supremacist is that he admits that the dominant culture wins. He's afraid that as an inferior being, which if his reported linkedin is true, that he will be replaced. He doesn't believe then in a meritocracy, he believes that as a weaker member of America that he shouldn't be left behind. He further believes that America should be broken up into ethnostates to eliminate racial issues. Ahh, but who gets the sandy beaches of Florida. Yeah, forcing ethnostates like that reeks indirectly of the redistribution of wealth. Analogously speaking, I am guessing politically he wanted to send the Jews to the British Mandate, but instead applied the final solution or maybe kristallnacht to a few shopping centers.

And see his reported linked in

A lot of this doesn't really make any sense. Being the first day, I suppose it doesn't have to. Lots of things don't sound right, but everything is always chaos at first. Given some of the posts by the court and the sheriff, I wonder if crusius acted a day late. There are many tales being told in the media and the narrative keeps changing, and some things don't make sense. I don't need to see the corpses, pictures, or videos to admit that it happened, I will accept that it did. I am sure that prosecutors will have tons of video tapes this time, but by the time it is public there will probably be 2-6 more of these things and this will be long forgotten. But for at least 20 years, when bad things happen the media tries to control the narrative. It is important to remember to document what we can.

He hated the communist but was probably a national socialist himself. I am not sure why the media will say these people are right wing extremist. There is nothing right wing about them; They are national socialist. National socialist are not right wing. They hold traditional left wing views these days but realizes there is a finite amount of resources; are more concerned about who will be left to pamper either their lazy behinds or the behinds of their other countrymen.

So we have a new situation going on with the El Paso sheriff. Seems they don't like people trolling them on Facebook. I'll do a story on that later.

These mass shooting incidents will continue for a while. Try to avoid going to the shopping malls, supermarkets, big department stores, … etc during the busy hours. Do your shopping quick and leave the scenes once you have accomplished your goals. Social media platforms have successfully managed to spread hate and prejudice, and many people are brainwashed to a point of no return. Stay guarded and alert at all times because no one will do that for you.

yup, looks like another one happened in Ohio overnight at a bar.

I am probably too rural for these types of things to happen here.

I am not sure that social media spreading hate argument is complete. The social media platforms may claim to be purging such content,but all they are really doing is purging normal ideas and stifling public debate. Even bad ideas tend to have some basis in reality or theory. Maybe they are incomplete ideas or sentences spoken tactlessly, maybe they have a bad conclusion based upon reality or a perception. And social media is kind of going in the direction of everything SJW in its purest form is good, no room for anything else.

So there exist no narrowing. Ie. Person A: Immigration is good and we should have open borders. Person B: The average IQ in Somalia is 68, not all immigration is good. SJWs: person B is racists. Person C, let's limit immigration to educated or skilled individuals. Social media would prohibit person b from speaking, so the only thing left in the conversation is person A. Even if we suppose social media, in error, let person B speak, they might still declare person C as racist and ban him. You would think tech giants would think to work out the bugs in their code, but they aren't. I think you'll find the people who really developed these platforms were mostly conservatives, and now that it was built they are no longer needed. These companies are infected with SJW viruses.

Patrick Crusius [PC]: immigration is bad because American has only so many resources to redistribute

person B: If we ended socialism, no one would care about the economic cost of hispanic immigration.

PC: Oh, Immigrants aren't the problem-democrats are. I kinda knew that all along, I said that they were a problem just not THE problem.
....
PC:But I am still an environmentalist like David Hogg who thinks killing people is good for the environment.
Anyways...I guess you can't stop all of their problems so easily with reason. People will still have their delusions or overvalued ideas.

kind of late saying this. I noted the al gore connection inspiration on other grounds, but the name of the manifesto is "The inconvenient truth" which I hadn't picked up traces of until yesterday. How could I miss the title and obvious reference! Al Gore's 2006 documentary was called "An inconvenient truth".

Sadly it doesn't say party affiliation. Also there doesn't appear to be a 90 kingbury address, the numbers appear to start at 900. So a digit is likely missing.

What is sick is that from the sky, almost all the homes in this area look the same. There are subtle differences when you zoom in, but it seems to be a middle class sardine district. I would imagine this is part of a home owners association project.

booked in and charged on August 4rth
https://casesearch.epcounty.com/PublicAccess/JailingDetail.aspx?JailingID=1247968