Suggestions on how to fix these problems.

Since leagues only affect loot box distribution, people would still get just as much dec for winning at 2000 rating as they do now even after those changes, which is still rewarding but not overly rewarding for a mere level 1 deck.

It is easy to accomodate this by making small changes to the lootbox system, simply choosing new % drop chances for each league. Maybe then reaching gold will become an actual achievement again and we can get more reward cards for getting there. 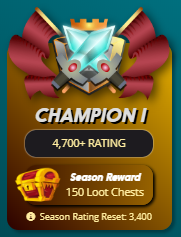 Limit the maximum ranked rating a player can get to a full tier of rating points. In today's system, my suggestion would be a 5000 rating. By the end of the season, the entire champion league would be relentless. Whoever tradewins would greatly risk dropping to champion 2.

Of course, this could be even more effective in the system I've described above, as everyone would have a lot less safety within the champion league since it would be much easier to drop out of it, having a limited maximum rating being while being composed of only 200 rating points per tier.

Do you like this idea? Or maybe you have an even better suggestion! Leave your opinion on the comments below.

Tutorial: How to EASILY exchange BTC for STEEM (or other tokens) from COINPOT

The problem is there aren't enough players.... we have seen an exodus of players since december and not enough replacements coming in that have major bank to buy high level cards, look at prices of cards on market and price of DEC that has tanked because of this sell off. Combine this with the high cost of having a 'gold level' deck... the untamed combine level make it very expensive to own a deck that is level 5. Now with the changes to the rewards people seem to be getting bored with the negative return on investment... I am hoping it turns around soon because I like the game. I have a level 1 deck I am playing now and have gotten to gold II fairly easy because there are few opponents with level 3 or 5 summoners I face.

There is a lot of new players, but they are on the "level 1 cards" tier. This is the reason we can get to gold 2 so easily, hence my suggestion.

This would still be a problem anyway, due to how ratings work. A larger playerbase necessarily means more low level players at gold.

Hey @felipejoys, here is a little bit of BEER from @isnochys for you. Enjoy it!