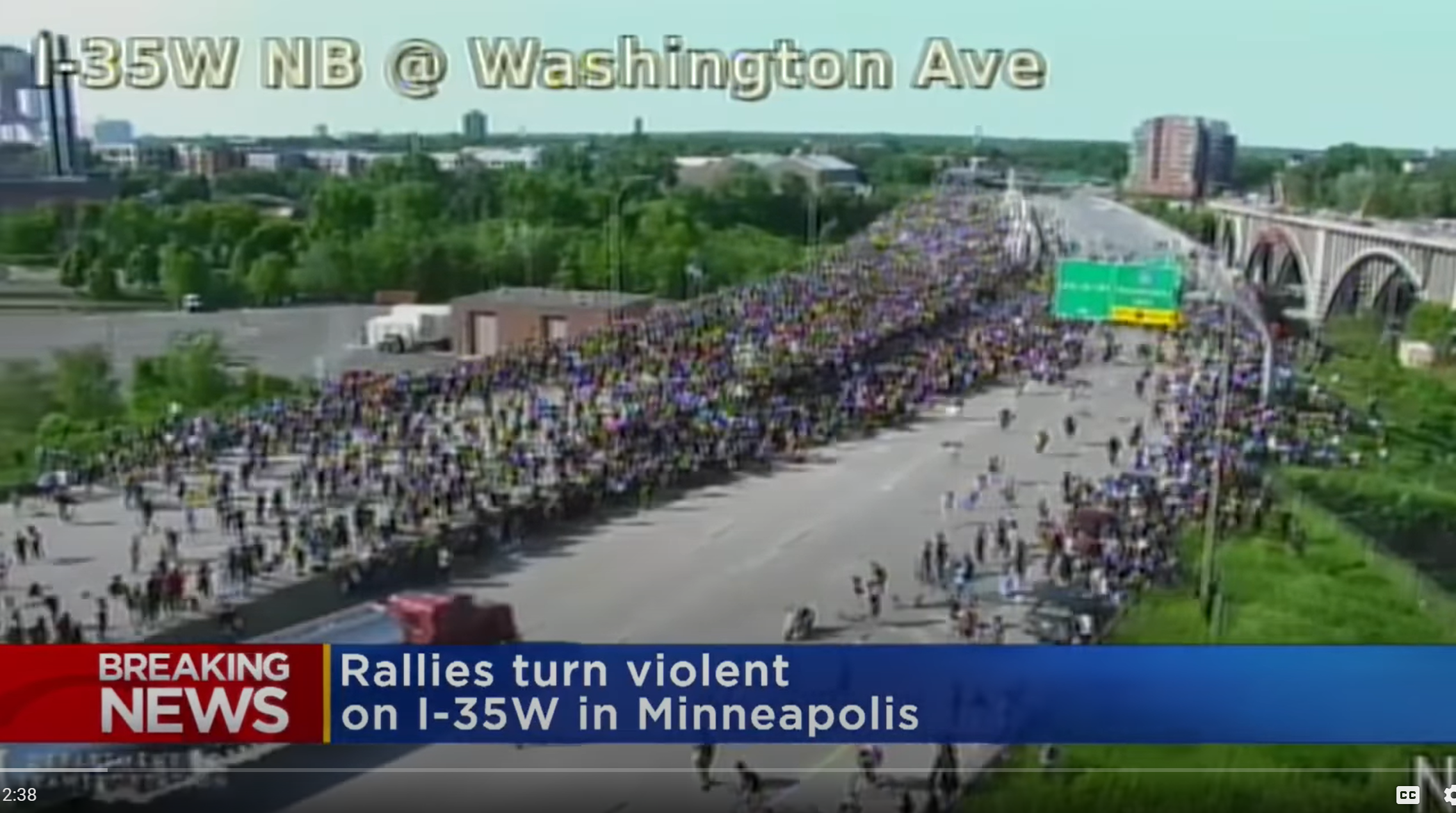 Sunday afternoon I saw the headline on my phone: “RAW VIDEO: Truck Drives Through Protesters On I-35W In Minneapolis”

Freeway shutdown? A truck driving through a crowd?

The traffic cam video showed what happened: A large group of protesters covered both sides of the freeway bridge. After a few moments, those on the southbound side swiftly parted down the middle as a semi-truck entered from the bottom of the screen.

The truck slowed abruptly, right in the middle of the crowd, appearing to stop short of striking anyone. As soon as it stopped, the crowd swarmed.

I’d learn the driver was then yanked from the cab, beaten, and robbed. Police came and got him away and to the hospital—and placed him under arrest.

The exaggeration continued on Twitter, where a “lead national correspondent” for CBS This Morning wrote – “BREAKING: Tanker truck plows into crowd of demonstrators on Minneapolis highway.”

For many others on Twitter, exaggeration of facts led to a radical conclusion: This man was a terrorist who ran right through the road closures. Thousands of users liked and shared the driver's fresh mugshot, his nose freshly bloodied from the attack.

The following day, Minnesota’s Governor Walz held a press conference addressing the incident. First, he expressed his relief no one was hurt. Then he offered the first indications from an official that this may not have been an intentional act. Investigators found the driver was simply working and was ahead of the road closures.

The day after, this “terrorist” who “barreled” his truck into the protesters was released without charge. His name is Bogdan, an immigrant from Russia with a wife eight months pregnant. Following his detainment, she released a video asking for help. Their bank accounts were frozen due to Bogdan being robbed and his truck cabin looted.

Several on social media expressed dismay he was released. I suspect because political leanings sway one’s ideals of justice. But this incident reveals a sway broader than any one political leaning. It reveals an almost society-wide sway, seen by how official outlets interpreted this incident from the get-go. Soon after it happened, the Minnesota Department of Public Safety stated: “Very disturbing actions by a truck driver on I-35W, inciting a crowd of peaceful demonstrators.”

In that same press conference, the governor described how “peaceful protesters in Minneapolis and St. Paul protected this person [from those who were beating him].”

Several other people and outlets would similarly make sure to describe the crowd—estimated between 5000-6000—as peaceful. I’m guessing this was done to distinguish this group from rioters. Yet many of these protesters swarmed, climbed upon, punched, kicked, and threw a bike at the truck. And soon after, they did much the same to the driver. That many of the protesters protected him doesn’t negate the fact that many others tried to murder him. See the video, and then juxtapose this action with the word “peaceful”.

And we haven't even gotten to the question of whether blocking freeway traffic illegally can logically be considered "peaceful". It doesn't mean they're wrong or bad, but it is an act of disruption.

Yet the main concern isn't the protesters. It's in not perceiving reality correctly—or perhaps not being able to convey it accurately because of social pressure.

Overall, I don’t suspect a politically nefarious motivation behind these inaccurate descriptions. At that news conference, the governor actually used a right-leaning talking point when describing this event. He compared Bogdan to the famous case of Reginald Denny, whose truck was caught up in the middle of the 1992 LA riots. Denny was pulled out of his cab and beaten unconscious with a hammer and cinder block. He suffered 91 skull fractures, yet somehow lived.

That the governor ccited the Denny story sows political tribalism wasn't getting in the way of acknowledging the concerns shared by his critics, who dislike the governor and similar politicians’ general permissiveness toward today’s riots. I believe the governor is a good man. He’s just caught up in this "sway" now deeply affecting the country—an unwritten, almost black and white social code granting incredible generosity and leniency toward those taking up an established good cause.

The result of this unquestioning obedience to this code—which includes outspoken charities, politicians, and celebrities financially supporting riots—has been immeasurable numbers of innocent lives harmed (including several murdered). Meanwhile, race relations—THE target issue in all this—has been damaged. I've seen so many videos of interracial conflicts and blatant racist speech between practically every combination of ethnicities at odds during these riots.

All of this unrest will hit the poorest communities the hardest.

This sway is warping fundamental aspects of perception: government declarations, media reports, celebrity endorsements. When commenting on this freeway cam footage, one local WCCO reporter described the protesters, as they swarmed to attack Bogdan’s truck, as “brave people attempting to slow it down”. You can see it here: https://twitter.com/DeRushaJ/status/1267248066639417344

This reporter’s accompanying tweet: “Horrifying traffic cam video of a semi truck going full speed through crowds of protesters on the I-35W bridge in Minneapolis.”

One user challenged the description by responding to the reporter: “Isn't it a stretch to say the truck went through crowds of protesters when no one even got hit?”

The reporter replied by saying, “…find some humanity.”

There are several social sways within U.S. at any given time, pulling individuals and groups into all kinds of directions. But right now, this one, over-arching sway is affecting the broadest influencers and determiners of how our truth is perceived. It has become glaringly obvious in this whole George Floyd saga, and it was apparent in this one, single incident this week, where scores of angry protesters pulled a man from his truck and beat him—and then were emphasized as “peaceful”.

You need to stay vigilant, so that this sway doesn’t steer your perception. Second guess sensational headlines. Be conscious of those moments it feels like individuals are pressured to say things they really don’t mean—while others are being led to believe things that simply aren’t real.

It’s vital to steer clear. So many official and “above board” leaders and outlets today seem affected, and this affect is magnified right when society needs them the most. In such dire times, strong, clearheaded individuals are more needed than ever to step up.

This post has been rewarded by the Steem Community Curation Project. #communitycuration06
This is a great article examining how things can be presented one way and infact it inot the truth. These are hard times. Full of passion and reactions.
You are right when you say we need strong , clear headed people to step up.
Please join us on GROWING TOGETHER COMMUNITY FORUM this Sunday the 7th at 11 am pst, in CANNA CURATE, to share your post with us.
https://discord.gg/CpnNvK2
RESPECT