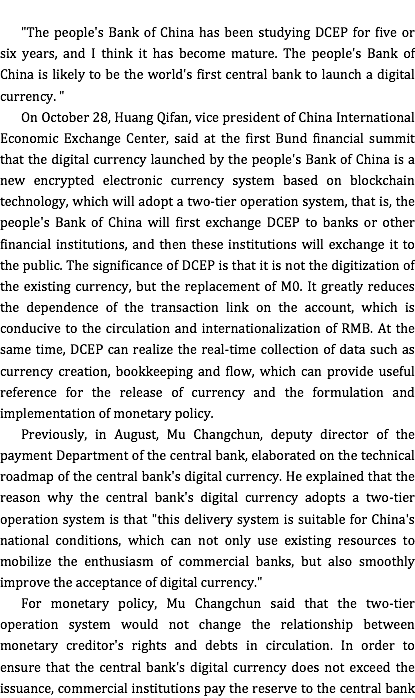 On October 28, Huang Qifan, vice president of China International Economic Exchange Center, said at the first Bund financial summit that the digital currency launched by the people's Bank of China is a new encrypted electronic currency system based on blockchain technology, which will adopt a two-tier operation system, that is, the people's Bank of China will first exchange DCEP to banks or other financial institutions, and then these institutions will exchange it to the public. The significance of DCEP is that it is not the digitization of the existing currency, but the replacement of M0. It greatly reduces the dependence of the transaction link on the account, which is conducive to the circulation and internationalization of RMB. At the same time, DCEP can realize the real-time collection of data such as currency creation, bookkeeping and flow, which can provide useful reference for the release of currency and the formulation and implementation of monetary policy.

In addition, at this stage, the central bank's digital currency design focuses on the substitution of M0 rather than M1 and M2. "The existing M0 (banknotes and coins) are easy to be forged anonymously, which may be used for money laundering, terrorist financing and other risks. In addition, electronic payment tools, such as bankcards and Internet payment, based on the existing tight coupling mode of bank accounts, the public's demand for anonymous payment cannot be fully met, and so electronic payment tools cannot completely replace M0. The design of the central bank's digital currency keeps the properties and main features of cash, and meets the needs of portability and anonymity. It is a better tool to replace cash. "