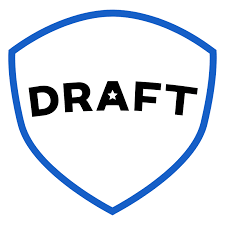 This covers strategies and details that are specific to one-week 3-Person drafts that are available on the popular fantasy football DFS site called Draft. I'm going to give you the inside track and post detailed weekly articles with projections and strategies about this format between Friday and Saturday morning each week of the NFL season, but I wanted to explain how this particular DFS game works for people that may not be familiar with it and why it's profitable for people who are familiar with fantasy football and DFS.

The live drafts are hosted on Draft. The drafts are fun and go quickly(5ish minutes). Each team gets a randomly assigned draft position and take turns picking players in a serpentine-style draft. Team 1, Team 2, Team 3, Team 3 again, Team 2, Team 1, Team 1 again, and on it goes until every team has made five draft picks.

The five draft picks must consist of 1 QB, 2 RBs, and some combination of 2 WRs/TEs(Can be WR-WR, WR-TE, or TE-TE). Because there are only 15 total players drafted, you're only focused on the most elite players at each of the positions.

Why This Format Should be Targeted

There are so few drafters with so few players that you have an opportunity to manipulate the draft to your advantage far more than if you were drafting against more people. You will also take advantage of Draft's built-in scoring projections. Most of the people you will be drafting against will rely on Draft's Average Draft Position (ADP) and scoring projections, but more accurate projections are available elsewhere. These factors combined allow you to "game theory" the draft to take advantage of your opponents from every draft position.

This is how a draft may start. Let's say you have the third and fourth picks in the beginning of a draft. Here are the players available with Draft and our projections in parenthesis:
QBs

A lot of drafters would go for Mahomes and McCaffrey(we have two picks because we're drafting third). McCaffrey is obviously going to be one of our draft picks. The second choice then is between Patrick Mahomes, another RB, or Julio Jones. We should go with Julio here.

Mahomes may be the highest projected player, but he's projected for less than two points more than Matthew Stafford whom we can get with our very last pick since some combination of Mahomes, Brees, and Watson will be drafted by the other two teams. We could go with a second RB, but either Mixon or Johnson are likely to fall to us anyways. The key here is Julio.

Draft has Tyreek Hill projected higher, but we still need to grab Julio here because our projections are higher and he won't be available if we wait until Round Three to draft him. If we pass him up, we're looking at two WRs or TEs that will get us 16ish points apiece. We're losing over three points if we pass on Julio and only gaining about 1.5 points by taking Mahomes.

This was a simplified, but poignant example. There is almost always at least one draft position where players on Draft are likely to make a significant mistake that gives us a big enough edge. The goal is to get over 33% of the total projected points(all teams combined) or higher from any draft position. Some draft positions will yield projected point totals well over 40%. That's an important goal because not only do we need to defeat our opponents, we need to defeat the fee or Rake from Draft.

If we only win one-third of the time, we'll lose money. We need to use the game theory demonstrated above over a full draft to give us an edge from every draft position to ensure the highest possible return. Sometimes the advantage is smallish, but sometimes the advantage is huge depending on the week and your draft position. It's like the line from cult-classic poker movie Rounders

Get your money in when you have the best of it. Protect it when you don't. Don't give anything away."

We should do more drafts during good weeks and less during bad weeks. The goal is to win 40% of the time or greater(You actually need to win 37% of the time to break even) from all of our drafts combined but it doesn't really matter which weeks you win.

Last year I did 53 and won 22 of them for a 41.5% win rate. It was a tidy 11.6% ROI, but I think I can do better. For one thing, I wasn't too selective on how much I played week to week. There are some weeks where there's barely an advantage. You can still play because it's fun, but there isn't much meat on the bone. There are some weeks where there's a huge advantage normally because Draft values one or more players significantly higher or lower than our projection.

What this is saying is that for every $1 we put into entry fees, we can expect to win 8 cents IF we ONLY win at a 40% clip. This is why a 40% win rate is a bare minimum goal and why we want to do as many drafts as possible over a full season. At the the 40% win rate, you're getting an 8% ROI, which is acceptable. Anything above that is a bonus.

Putting It All Together

Each week, I'll analyze the Sunday slate including projections and multiple ways to attack each draft position Sometimes you can use two completely different strategies to get similar edges. Sometimes you'll actually want to draft a team with a lower projected total because you'll get a higher market share of the combined projected points. It just depends on the week.

Working out the projections and doing the write-ups takes a lot of time. I need to see people are enjoying the article and willing to interact. The only thing I ask is that you engage with me. I'd even love seeing your results. I'm also more than willing to answer any sort of fantasy football related questions you have so fire away in comments or on Twitter @FF_Gouge.

I love the concept of Steemit and I love football. I'm hoping we grow a community of fantasy football-loving people which would encourage others to provide even more great fantasy content.

Remember to look for my Draft 3-Person DFS articles each week.