Harrison Ford and his CGI Dog. "The Call of the Wild" VFX Breakdown 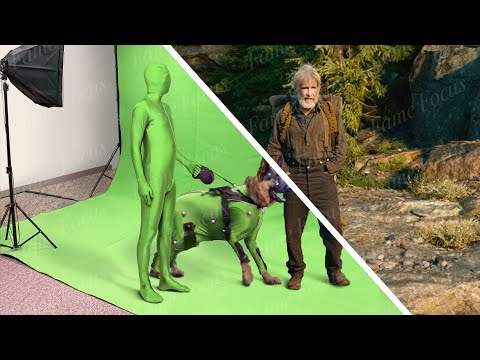 This relatively short film tells the story of "Buck" the dog. After being stolen from his comfortable home in California, he is sold and ends up being transported to Alaska to become a sled dog.
Here, he slowly sheds the comforts of civilized life and becomes more dependant on his primal instincts in order to survive. Like the music in this video?
Get it on Google Play:► https://bit.ly/2F10vbs ◄
Get it on itunes: ► https://apple.co/2ENGfu9 ◄
Listen on Spotify: ► https://spoti.fi/3boTfCl ◄
Buy it on Amazon: ► https://amzn.to/2QVJZfk ◄

Previs.
Early on the team knew that in order to make this film, Buck and the other dogs would have to be 100% CG. They also knew that with all the CG environments needed, it made sense to create the world that the movie would be shot in, before principal photography.
This led to staging every scene to get real-time visualizations of how their set would be. this enabled them to identify what needed to be virtual and what could be done physically.

Getting Physical
In previs, the team found out they would need various different rivers, one for panning gold, another for swimming and canoeing, and another for other interactions with Buck. Rather than scout out different locations that wouldn't be quite right, the special effects team decided to build their own 300ft river.

Let it Snow
Although the majority of the story takes place in the Yukon, it was mostly filmed in California, and one thing the Yukon has that California doesn't, is snow. The special effects team had to use a variety of different methods to "create" snow depending on the set location and what scene was being filmed. For the sledding scenes, super slippery snow was needed so they used a similar substance to the absorbent white polymer you find in diapers.

The Thunderdome
MPC was chosen to lead the VFX in this film, thanks to their previous work with CG dogs.
Early on, MPC realized that the most complicated part of adding CG dogs would be matching the lighting of the dogs to that of principal photography.
When filming an exterior scene on an indoor set, lighting is key. if you just light for a generic day, the lighting will lack depth and contrast. If you light for a specific situation and time of day it adds complexity but it is also harder to match CG elements in post.
In order to make this easier, the type of sky to be used had to be chosen before principle photography. MPC compiled 500 different skydomes for the director to choose from.
On the set, they rigged up 300 Arri SkyPanels (LED Softlight panels) and a layer of muslin underneath. They use a Plug-in that had been written for the unity game engine that takes the hemispheric skydome imagery and communicates with a DMX switcher. this allowed them to control the 300 light panels and match the lighting on set, to the Skydome imagery.

Playing Buck
All the dogs in this movie are CG. This creates various problems during principal photography. One of them is that when you have a scene with multiple extras, you need someone, or something, to stop them from invading the space where your CG asset is going to be. Another problem is that the actors have to interact with the CG asset.
In order to overcome these issues, the team brought in a Movement Choreographer called Terry Notary. Terry performed "Like a dog", his movements and mannerisms drove the other actor's performances as well as camera movement and framing, and the emotion he showed was a good reference for MPC to match with their CG asset.
His Running and trotting had to be almost identical to that of a dog, so that MPC's CG dog could hit all the marks in a scene, whilst still moving as a dog would.

Criticism
A lot of people have criticized this film with comments like "Unnecessary use of VFX" and "VFX ruin the movie", but we think that this may be a little unfair.
During the production of this Fox Searchlight film, 21st Century Fox was acquired by Disney. When MPC was about a quarter of the way through animation, reviews for the new Lion King film came out. these reviews claimed that the film lacked emotion.
There was, therefore, quite a lot of pressure to avoid this criticism in "The call of the Wild".
Although MPC's "Buck" has incredibly detailed fur and his movements are almost identical to those of a real dog, what lets it down, is the attempt to show more emotion than a real dog can portray.
You can have a 100% photo-real dog, but over-exaggerate its eyebrow movements, open its eyes too much, or slap a smile on its face and it turns into a cartoon.

Please give us a like if you enjoyed this video, don't forget the links to the music in this video are in the video description and be sure to let us know, in the comments, which movie VFX you'd like to see behind next!