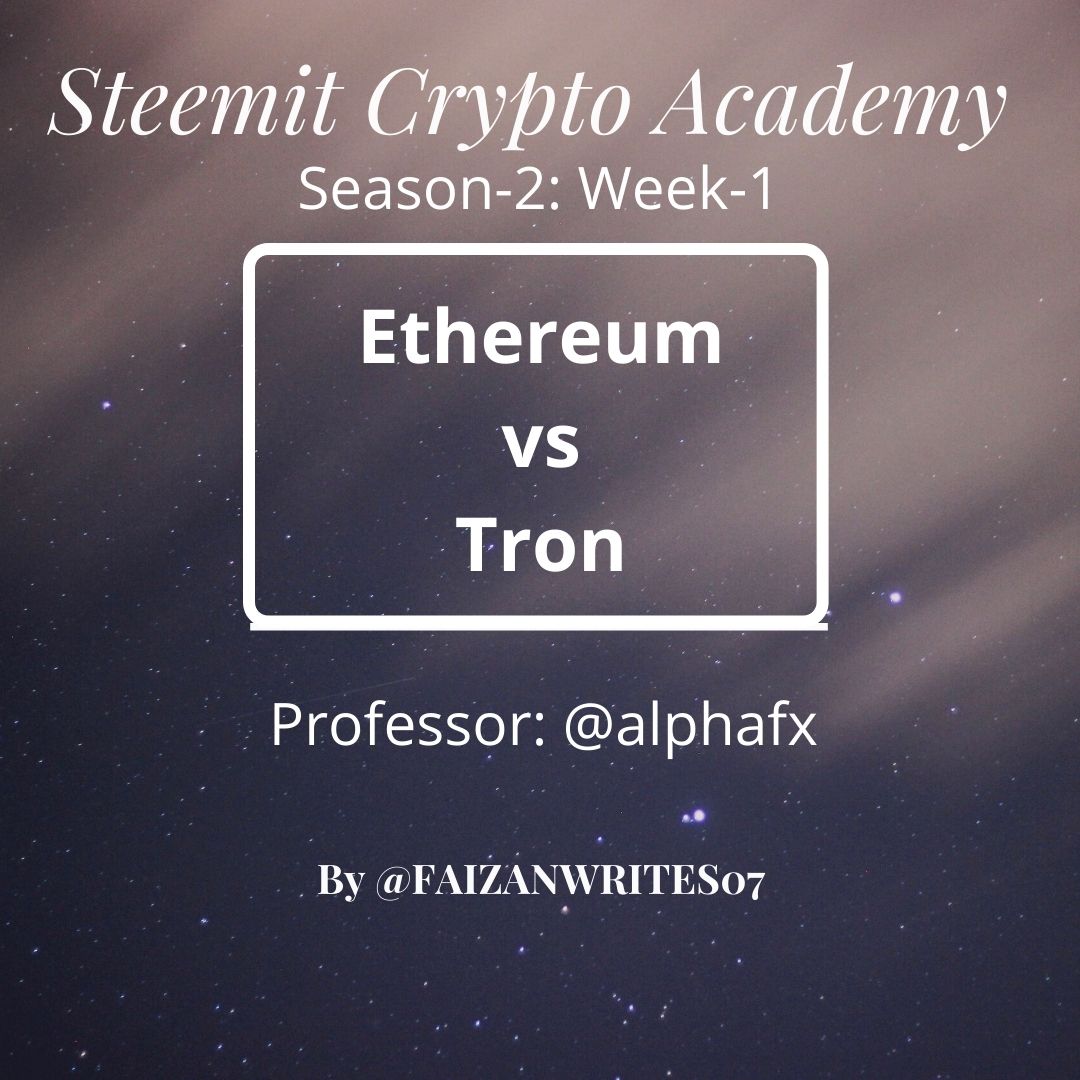 Hello (Hola) to everyone!
I hope you all are doing well.

Thank you for your amazing lecture professor @alphafix. Here I will try to submit my homework assignment in such a way that fulfill yours expectation from your students, Hopefully you will approve it.

Lets start with my Assignment!

Picture edited by me on Canva.com using a Free to use template

Requirement:
Give a detailed comparison between two blockchain platforms of your choice.

I have choose to Compare Ethereum and Trons blockchain platforms for my assignment. we will discuss it in details but let us first know what does blockchain means?

Blockchain:
A blockchain is a growing list of records, called blocks, that are linked using cryptography. Each block contains a cryptographic hash of the previous block, a timestamp, and transaction data. By design, a blockchain is resistant to modification of its data. This is because once recorded, the data in any given block cannot be altered retroactively without alteration of all subsequent blocks. Source

The technology behind blockchain is really complex but its purpose is to keeps record decentralized and users can easily rely on that information.

First of all we should define both of the blockchains.

Original source of this picture is:

Tron:
TRON is a Blockchain-based decentralized operating system based on a cryptocurrency native to the system, known as TRX. Source

In the Tron blockchain, TRX (Tronix) is used to pay for any services or contents.

Ethereum:
Ethereum is a decentralized, open-source blockchain with smart contract functionality. Ether (ETH) is the native cryptocurrency of the platform. It is the second-largest cryptocurrency by market capitalization, after Bitcoin. Source

In detail comparision, we will discuss these main points only, which are:

Ethereum and Tron both blockchains are decentralized blockchains, which is an important feature of cryptocurrencies blockchain. Both of them, eliminates third party interfernce in it's content creation ecosystem.

As, both of them are decentralized but in popularity Ethereum network is way to ahead of Tron because of hifgher number of projects built on it.

Original source to this pic is:

One of the main reason of using cryptocurrency blockchain is to improve the rate of, speed of transaction. Transaction speed differs according to block time, its size, network traffic, and transaction fees.

In financial side, the speed of transaction is very important in that particular network used all around the globe.

Tron and Ethereum both have a very strong security system to prevent any interference from the hackers. And both of them always update their security systems from time to time.

Ethereum is refered as the most secured network because of its improvements in hack-proof strategies. Tron on the other hand has also a very good security record till now with no hacking record till now.

For every potential investor, who wants to invest in cryptocurrencies, it is important for them to do a research about the worth and size if the blockchain network in which they might invest, to know the growth and value of that blockchain in future.

As of comparision, Etherium blockchain value is about $250 billion while that of Tron is only around $2 billion, which makes Ethereum almost 200 percent more valuable than Tron.

5-Acceptance and Community Support:
In acceptance level Ethereum is way to ahead of Tron, as Ethereum has recorded around 450,000 followers on its social media handles, while Tron is only followed by around 60,000 to 70,000 followers.
And in market, almost 60 percent users of cryptotraders uses Ethereum as a mode of payment. which makes Ethereum more acceptable and supported by its community than Tron.

Both the cryptocurrency blockchains are good enough to be used, but Ethereunm is somehow more way ahead than Tron. Ethereum has more users than Tron. It has way better developer community than Tron and Etherum employed around 100 developers, who only works on the core protocols of its network.

Thank you so much for reading!

Any suggestions or corrections will be highly appreciated.

Thank you, Professor! and I will try to improve next time.