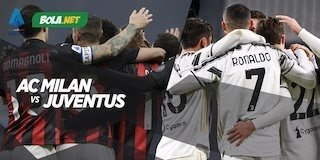 Italian League standings leader AC Milan will face a big match against defending champions Juventus. In the 16th week of the 2020/2021 Serie A Italian League match, it will take place at the San Siro on Thursday (07/01/21) at 02.45 WIB in the morning. Until the 15th week, AC Milan or the Rossoneri are still crowing at the top of the standings with 37 points.

AC Milan is only one point adrift of rival Inter Milan in second place with 36 points. While the Bianconeri opponents Juventus are in fifth place with 27 points. In this match, the architect of AC Milan, Stefano Pioli, reportedly failed to bring down the five main pillars, namely Zlatan Ibrahimovic, Ismael Bennacer, Alexis Saelemaekers, Sandro Tonali, and Matteo Gabbia. This condition forces Stefano Pioli to be predicted to use a 4-2-3-1 formation with several changes in the composition of the starting XI.

The starting predictions were Gianluigi Donnarumma under the bar, Davide Calabria, Simon Kjaer, Alessio Romagnoli, Theo Hernandez, Rade Krunic, Franck Kessie, Samu Castillejo, Hakan Calhanoglu, Ante Rebic, and Rafael Leao as strikers. Of course AC Milan is eyeing a victory in this match to be safe from the threat of a coup by Inter Milan, which is predicted to win against Sampdoria at the Luigi Ferraris Stadium.

Thank you for support @booming03 and @booming04

Then I'm guessing it's going to be quite difficult considering Juventus is also on top form at the moment.

Hey, your image citation is off. Can you properly cite the image using guidance below.

It's not easy to beat Juventus, but I believe that at the moment AC Milan is very strong

Thank you for reminding @njaywan