This is ibadan. I was born here, Im proud of it. 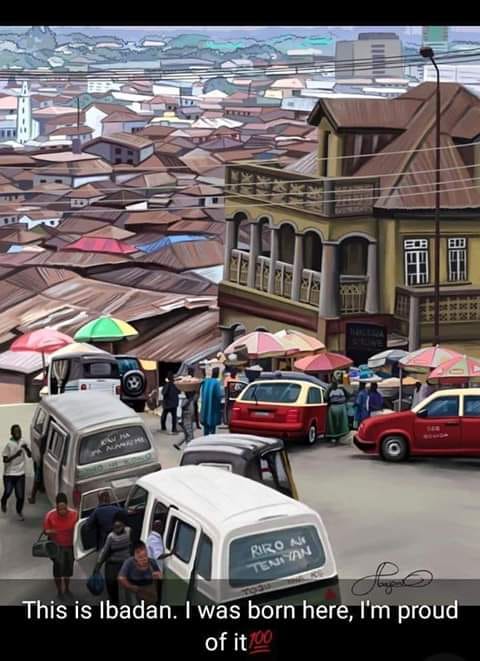 IBADAN, CITY OF RUST AND SHINE
Ibadan the Political Capital of Yorubaland is a city built on Eleven Hills.
GC
The Eleven Hills are:

But Ibadan is not just a City of Hills.
It is also a City of 'Bottoms'.
Loosely translated, 'idi' means bottom or the backside.
Several people have attached sexual innuendoes to the names.
However, the actual translation indicates that some of the 'idis' were connected with how the settlers converged at a point, thereby leading to how they arrived at the names given. This 'Idi' translated as a bottom also means under the tree.

Go around the city and you can locate the various ‘idis’, to mention but a few

For instance, Idi-Arere is a location where the early settlers converged and held meetings under an 'Arere' tree.
The actual full name is Idi- Igi Arere under the Arere (Obeche) tree.
Idi- Arere is located between Oja-Oba and Molete.

Idi-Ose, which should actually be Idi-Igi Ose (under the Ose [baobab] tree), is located around Ojoo/Moniya Road.

Idi-Ishin is located around Jericho GRA area and was named after the Ishin (Ake Apple) tree.

Idi-Ape is located at the intersection of Iwo road and Bashorun and was named after the Ape tree.

Idi-Ayunre, which is located at the outskirts of the city, on the way to Ijebu-Ode, was named after the Ayunre (Albizia Zygia) tree.

Ibadan is also a city with several junctions popularly called 'Orita'.
In Yoruba mythology, these 'oritas' or junctions are places where sacrifices are offered.

Popular Oritas in Ibadan are:

And still talking about names, several names in Ibadan have their origin in the inability of the residents to pronounce the original names correctly.

For example, the place popularly called Oke-Sapati was originally called Shepherd's Hill [Oke Sheperd] but the illiterate residents couldn't pronounce 'Shepherd's Hill' and it was corrupted to Sapati.
That was how it sounded to the ears of the residents at that time.

The story behind Kudeti is quite interesting.
A river runs around that area and the British District Officer during the colonial era was quite shocked at how dirty the river was.
The river served the residents as they washed, had their bath, defecated and drank the water.
The DO therefore exclaimed, "This water is TOO DIRTY".
The illiterate residents now corrupted the words 'too dirty' to Kudeti.
Ibadan is still steep in its traditional beliefs, though modernity is fast catching on.

One of such is the still very popular Egungun (Masquerade) Festival, which usually takes place around June and July.
This period was a period of fear mixed with excitement.
Everyone wants to catch a glimpse of the Oloolu Masquerade - except women who are forbidden to see it.
Oloolu is the most popular and the most feared.
He usually carries what looks like a flat tray with several items on it.
Several years ago, there was a clash between a very popular Muslim cleric now late, called Ajagbemokeferi, and Oloolu.
It was rumoured then that Ajagbemokeferi derobed and unveiled Oloolu.
Then, there is Alapansapa, the second most feared masquerade after Oloolu.
Alapansapa dresses very smartly in bright colours.
Even though most Masquerades are associated with canes and whips, it is more so with Alapansapa.
There is also Atipako and Abidielege.

In spite of the traditional background of the city and the practices/beliefs of its residents, Ibadan has been rightly acknowledged as the INTELLECTUAL capital of the YORUBAS, and indeed Nigeria at large, and this is not just because the first University in Nigeria is located in the city.

I really don't know how many cities in Nigeria that have as many research institutes as Ibadan.
Ibadan has:

All in one single city!
I don't know which other town or city can boast of these.

Ibadan is truly a mixture of the ancient and the modern.

Permit me to also add these as some of the feats Ibadan has made in the history of Nigeria.

And Ibadan also entered the books of history as probably the first city with over 25 traditional rulers, all coronated same day in August 2017. But recently in September 2019, this was being under review as traditional rulers gave room to unity in Ibadan land and they finally surrendered to the conditions of peace laid down by the Olubadan of Ibadan land, Oba Saliu Adetunji, by dropping their crowns. Though, they (the traditional rulers) claimed it was done to honour Olubadan.

okay i will check later