Terminator: Dark Fate forces an unneeded agenda, bad CGI and destroys your childhood all in one go. 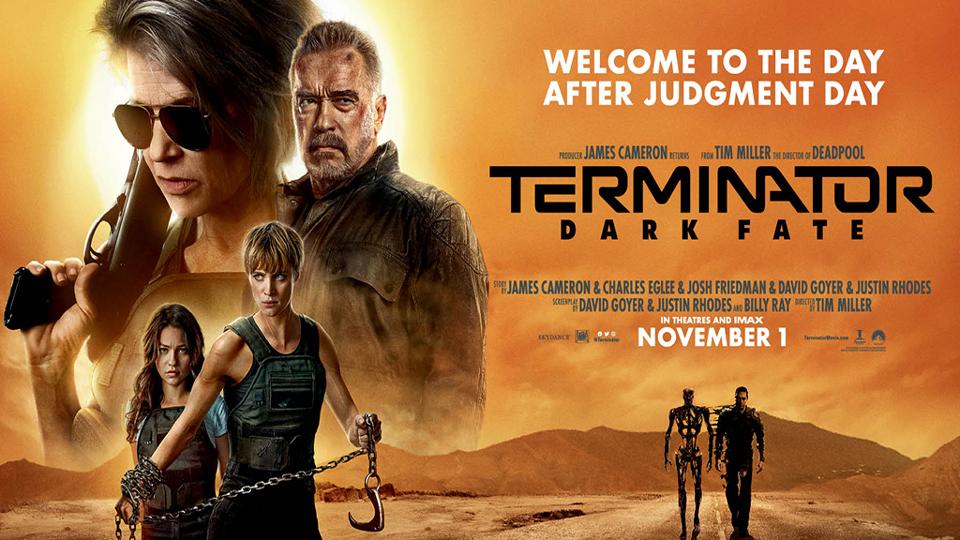 Man, was I pumped!

The first Terminator is a fantastic movie.

But the second one (T2), a masterpiece as far as I'm concerned.

I can't remember the number of times I asked my mom to rent that movie on VHS from the local library but it's a lot.

I've seen it countless times as a kid and as an adult and I never get bored of it.

The story, the action, the love I feel for the characters. Everything works.

Sadly after T2 the franchise never managed to get back to the glory of the first two and has been going slightly downhill from there.

But that was about to change last night!

Terminator: Dark Fate would leave off where T2 left us (like the other movies never happened).

The actors, Linda Hamilton, Arnold Schwarzenegger, that made the first movies great were back and even James Cameron was involved once more!

And I was ready! This was going to be beyond awesome!

And...then...within the first 5 minutes, something happens in this film that is so soul-crushing to people that love T1 and T2 that the movie never recovers from there.

And then...from there, the franchise tries to reboot.

But it's the same story just with different characters.

Two Terminators are sent back in time.

A good one (woman) to protect and a bad one (man) to kill a girl that will play an important roll in the future.

The good Terminator plays a strong role and she gets to play a more human-like Terminator because of things that transpired in her future. It does work.

But the bad Terminator (Rev-9)..o man..he's the blandest and most boring character that ever set foot in a Terminator film and because he's mostly made of (bad) CGI he never feels real.

Just look at his face and clothes...it's like it's plastic CGI.

One stare of Robert Patrick in T2 as the T-1000 is more menacing than whatever this Rev-9 can produce.

From there you get the same story as T2 but the it's the SJW edition with forced strong female characters and bad CGI.

Totally in line with the times. I get it.

But man, Terminator has already proven it doesn't need this.

I understand movies need more equality in these times.

But not in Terminator.....Sarah Conner was already the most badass woman I ever knew growing up.

It already proved that point before it was even a thing. There is no need to force anything and they never did force anything back then, she just was badass and it was believable and awesome.

It's the difference between forced and believable badassery and wished more movies got it.

For what then feels like an eternity the two groups chase each other through several bad CGI filled scenes and they also pick up Sarah Conner and later Arnold along the way.

Some more bad CGI filled scenes that are so over the top and unrealistic then follow, and by then you stop caring because you can no longer process WTF is going on-screen and your brain is slowly frying.

I was looking around in the cinema and several people were just on their phone...that's a bad sign.

It all ends up in one final scene, whereby then the innocent girl has now magically turned into a tough chick and there is some more bad CGI and then the credits roll.

I went into the movie pumped.....I came out of the movie emotionally drained and tired.

I had high hopes but for some reason, it's just not possible in these times to create a better movie then what they did in the '80s and '90s with T1 and T2.

But apparently it is possible to make the first two movies worse by just destroying all their meaning.

WTF where they thinking.

As this was a it.
I wish I never saw it.d give it a 6 out of 10 but considering what they did to the movies I love I can't even rate it.

I wish I never saw it.

I Love Terminator 2, it's one of the best films of my childhood

Same here. I watched it countless of times.

This isn't the first bad review I have seen along these lines. It makes me dread watching it because I know it will be shit but you know that way you have to watch just to see! Yikes!

Good luck! I would wait until it's out for renting or Netflix!

Oh yeah, definitely!! I don't fancy spending half a fortune seeing something bad!

I haven't seen the movie and I don't think I plan on seeing it because of the bad ratings everyone is giving it. i thought the previous one was pretty bad already and when I saw the trailer I wasn't really convinced and i just say it as a way to milk the IP one more time.

Really sad to see one of the most epic pop culture stories taken and "modernised" to force PC messaging down our throats. I think that Hollywood is taking itself too seriously, they are there to entertain us, not to force their agendas on us. I hope movies like these tank at the boxoffice so they can learn their lesson and focus on good content

I have a cinema pass I pay monthly for so I can see any movie I want but I understand why people are wary to pay for this one.

I was pumped to see this from the same things mentioned. Haven't yet but knowing it was actually bad, not sure I want to see it now. I knew there were some CGI things and visible poor implementations into the movie, but I hoped continuing from T2, with James Cameron back in it, would make it good.

I was hoping the same. There is so much potential for greatest with this franchise but also this time they could not make it happen.

I went to see Joker (REAAAALLLYYY GOOD) and saw the adds for Terminator. Was thinking of checking it out but this review makes me want to wait for netflix as well

The Joker was amazing! Loved it. Not sure if you saw but Rotten Tomatoes rates Terminator better than Joker. It's a joke.

Thanks for confirming my suspicions. I don’t think I will ever pay to see another Terminator movie ever again.

Take that poor old cow to the slaughterhouse already.

I agree. Enough is enough.

I really liked the Terminator: Salvation, the post-apo theme was spot on.

Now, you should watch The King on netflix :) A bit too long and sometimes dragging but at least leaves you with some emotions other than "wtf did I just watch" :)

lol! I guess anything beats wtf did I just watch :)

Disappointing to hear. Been seeing lots of similar opinions as this here. Guess I’ll wait on this one for a bit.

It sure is disappointing. Very sad actually. The first two movies are so good.

I cannot wait to see this and hope it doesn't disappoint me..

How can I agree more! That's why I may not gonna watch it. 😣

I thought the third movie was pretty good but that was mostly just because of the ending. What could have been considered a twist ending. I had the chance to go and watch this over the weekend but it didn't work out with my schedule. I am glad that it didn't now. I will probably just wait for it to come out on Netflix. That sucks that it wasn't what you were hoping. What a let down...

I don't mind the third on. It's not near the first two but it's an ok watch. The ending is pretty good indeed.

I too loved Terminator and Terminator 2 and agree that nothing after that ever quite did those justice. Sounds like this one doesn't either. So disappointing...

I know what you mean, @exyle... Haha! I can't decide between T1 and T2 (they're my favorite in the whole franchise)... But, I think Dark Fate, is pretty decente and - at least - better than the last ones.

@exyle, One thing is common nowadays and that is, when it comes to Movies people are hoping so much but at the end of the day they are getting dissappointed.

Enjoy your time ahead brother and stay blessed.

I was pumped to watch it before I read your post. Thanks for the heads up. If I decide to go anyway, I'll manage my expectations.

Similar disappointment. I really liked t1 from 1984 and this new time line and the whole gender machine human equality metaphor was pretty lame. Specially linda and arnold must have enjoyed playing their mundane roles.