Indiana Jones and the Temple of Doom is a different movie than I watched as a kid. 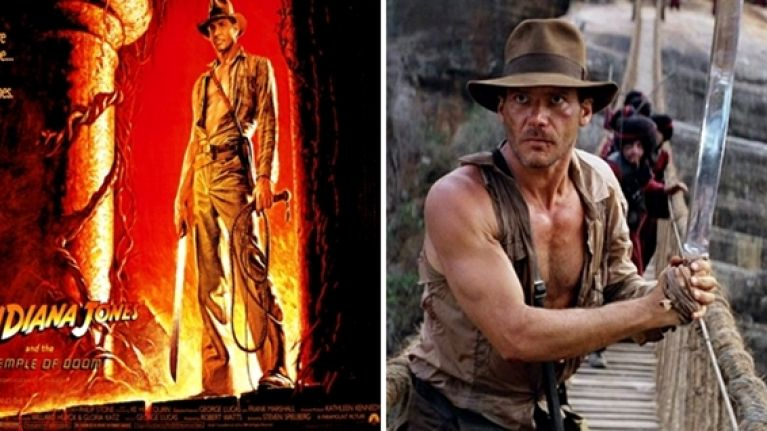 The first movie (Raiders of the Lost Ark) is amazing and I enjoyed it the most, the third one (The Last Crusade) is on par with the first.

But man, I sure didn't have the greatest time watching Indiana Jones and the Temple of Doom.

It was not at all as I remember it.

I knew when I was a kid that one scene (the human sacrifice scene) scared the shit out of me but I remember the rest as very adventurous.

But when I looked at it this weekend I found the whole thing extremely dark and depressing most of the time.

It's hard to find a single good vibe in the film. So unlike the other two movies that have a much better balance.

I did do some research and as it turns out to be, George Lucas and Steven Spielberg were going through some dark times of there own at the time and they wanted to create something 'dark' because of it.

Steven Spielberg has said that it's "too dark, too subterranean, and much too horrific." George Lucas says that he was going through a divorce at the time, "and I was in a really bad mood. So I really wanted to do dark. And Steve then broke up with his girlfriend, and so he was sort of into it too."

Man, I hope I never have to go through such events...it must be horrendous especially when you take into account what they came up with to express their feelings.

Snakes, Scarabs and monkey brains for dinner, death traps with nasty bugs, ripping the heart out of someone's chest, burning them alive, drink blood from a nasty skull, voodoo dolls, pins and pain, kids slaving away in an underground hell and you can go on and on.

If these are all metaphors of what it is like to be in a bad relationship...yeah...well....you don't want to wish that on anyone I would say.

Another fun fact about Temple of Doom is because of this movie (and Gremlins) the PG-13 rating was created.

I didn't know that before.

I guess many parents at the time didn't expect to get so many scary scenes when they took their young kids to the cinema back in the day. That must have been a shock for them.

Anyway, now that I am beginning to rewatch all the old classics I do realize how much I have forgotten about them and most of the time I do enjoy them a lot.

I like 80's movies. They are just a bit simpler than movies today. Not always realistic (like Commando, Big Trouble in Little China) but they are fun to watch.

I'm always looking for 80's movie that I don't know about so if you know about some hidden gems drop them here.

As it is Monday I wish everyone a nice week.