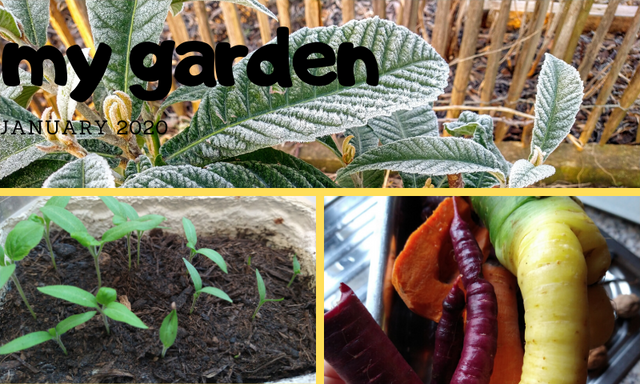 'm hooked again. I did not expect to be back at gardening this early in the year, but I could not wait any longer. In fact the first seedlings are almost ready to be repotted - at the end of January! What a crazy year already. But first things first. ## Previously... Last year I decided to take some of my pepper plants inside in order to keep them alive for more than just one season. It ended up in a disgusting aphids infestation that killed most plants because I refused to spray insecticide before all the peppers were harvested. A little bit of hope is still left, though. All plants are dead? No, one chocolate cherry resisted the Intruders. Admittedly it looks rather pathetic and you can almost hear it crying for mercy. But this, my lads, looks to me like the sucker is still fighting. If it does not kick the can, I might get to taste those yummy antipasti peppers very soon again. Aside from that I might have a very special plan for this plant along the way...

Chocolate Cherry pruned and ready for the next season. You can still see the damage from last year's hailstorm.

But not only the one pepper survived the winter, which was no real winter so far.
For the past years I have been growing ginger with quite some success and last year I had a try at growing turmeric, which is very similar, too. The ginger decided to hibernate instead of enjoying the conservatory, so I stored it in the basement. The turmeric on the other hand, although it is not growing much, has still kept its leaves.

Also victims to the aphids were two pepino plants that I had to relocate into the conservatory in order to harvest some of the fruits that were still growing. It turned out the fruits were tasting like crap - probably due to the stress the plants went through. Nevertheless, I decided to keep the plants as I already invested time and space into their wellbeing. One of them was sitting in the conservatory looking really bad, so I got rid of all the messy growth and repotted it. The second plant was stored in another room after I tried to get rid of the aphids by hosing them off the leaves and applying insecticides. It grew back niceley, and since the threat seems to be gone, I could reunite it with the other plants.

Let's move on to what I have planned for the upcoming season.

As I found a new passion in making hot sauce, an inevitable need for more spicy material has risen. I need way more chilis!
From all vegetables on the planet, the capsicum species delivers arguably the most copious variety of fruits, thus making shopping for this year's seeds a 'child in a candy store' experience.
The first variety I absolutely had to have is the 'Aji Charapita' - the most expensive spice in the world. Its tiny yellow berries and long growth period make it a pain in the arse, but hey! It probably ain't expensive for no reason.

Sticking to Aji, my second choice is the 'Aji Amarillo'. There is hardly any reason I picked this, I just liked the idea of bragging with a two meter tall chili tree.
The remaining aqisitions are two types of habaneros. A 'Neon Habanero' that is supposed to yield massive crops and the 'NuMex Suave Orange' which is almost free of capsaicin. I never tried habaneros but they are very popular. Probably for a reason as well.
From last year I also have some '7 Pot Douglah' and 'Chocolate Cherry' left which will complete my roster.
Speaking of the 'Chocolate Cherry', which I harvested seeds from last year: I decided to sow some of those at the end of December and placed them in a cool and sunny place. This is how they are doing one month later:

Usually I run into the problem of shooting plants due to the lack of light whilst sitting in a heated room. This year I set the heater to minimum and installed a reflector behind the plants which seems to have finally solved the issue.
I was triggered.
So I sowed eggplants, lettuce and more peppers.
This should be an eggciting year.

Admittedly I cheated a little bit and bought one of those LED plant-lights.
This is kind of an insult to my principle of spending the least amount of money possible - usually nothing at all - on growing plants. But I figuered it would be too much of a risk trying to grow plants in January without the option of supplementing light if we run into weeks of cloudy weather. So far I only used it on the eggplants on a couple of days, but it is very obvious how much they benefit from the extra light.

The germination of chilis was quite successful so far, with the exception beeing the Aji Amarillo. Luckily there is plenty of time to sow another batch.

As the space in my garden is quite limited, unfortunately, I can not propagate endless varieties.
Therefore plants that do not need plenty of space are much welcome. Im sure some garlic will fit somewhere in between the peppers. This is, by the way, the first time I am growing my own garlic.

Another way of preserving space is the use of pots. Considering how well the indoor growing is going so far, why not grow some radish and lettuce in pots for an early harvest? I found those radish seeds in our collection and they turned out to be more than ten years old. I soaked them in water and pretty much all of them still germinated. This is probably not worth the effort, considering this big pot is not more than one meal, but I consider it a scientific project.

Not everything is happening indoors though. In fact there are some very important tasks that should be taken care of in the garden, right now.

Evil does not rest. On warm and rainy days, the little slugs can already be found prowling. Obviously they can not do much harm in an empty garden, but there are good reasons to take care of them asap. Obviously a smaller starting population will decrease the overall amount of slugs throughout the year, but especially in spring when young plants are very vulnerable and the slimy guys benefit from the humid climate.
The fact that invasive slugs and beneficial snails are equally affected by snail bait, is the reason I usually do not use it at all. In winter, though, most snails lock themselves inside their shell and are therefore unaffected.

If you do grow peaches it is mandatory to protect them from the curly desease before the fungus activates. This must be done as early as February or even January, depending on local temperatures. Last year I successfully did just that, but to be on the safe side I will repeat the procedure again this year. As much as I hate to use poison in my garden, the weakened tree should be supported as much as possible.

For the real outdoor action we might have to wait until around April. The 15th of May is actually the date when all plants can be safely taken outside. Until then I will take good care of the seedlings and make my plans for whatever project I want to tackle this year. The aquaponics definitely need some rework and more space for plants would be awesome...

Looks like you've got a lot going on. You must be really dedicated to bring all those plants in over winter. I'm fortunate enough to live where we don't have many Fridays, so this year I'm hoping I can get the chilli plants string enough to get through winter and maybe even future winters. I've gotten them through before, but they were so weak that they barely did anything the following year, then died the next winter.

I’ve featured your post in the Homesteaders – Living Naturally newsletter.

This post was selected, voted and shared by the Natural Medicine Curation Team in collaboration with the C-Squared Curation Collective. Natural Medicine Curators are on the look out for natural health wisdoms, from herbs and essential oils to environmental health, spirituality, meditation and everything in between.

It has been upvoted and re-steemed by the @naturalmedicine and @c-squared accounts after manual review.

You can find more informative and inspiring natural health content on NaturalMedicine.io!

@C-squared is community curation group where everyone is a curator, actively working to support authors. Please consider @c-squared as your witness as a way to support this project.
12.02.2020 05:59
0
#

Thanks for using eSteem!
Your post has been voted as a part of eSteem encouragement program. Keep up the good work!
Dear reader, Install Android, iOS Mobile app or Windows, Mac, Linux Surfer app, if you haven't already!
Learn more: https://esteem.app
Join our discord: https://discord.me/esteem

You have so many seedlings ready for this year! I can't wait to see more. I didn't know snails were beneficial. How so? I fight slugs with used coffee grounds. They really love the leaves of peppers, don't they? They also love to eat my freshly planted and sprouting beans.

Most of our snails prefer dead plants and weeds, therefore helping with keeping the garden clean. A lot of them are also endangered and will usually not do much harm to crops.

This is an amazing garden you have here.
Mine is craving for some attention this year, been too busy with other stuffs. Need to spend some more time.

I might try the turmeric indoors like you see if I can get them to survive our gentle winter.