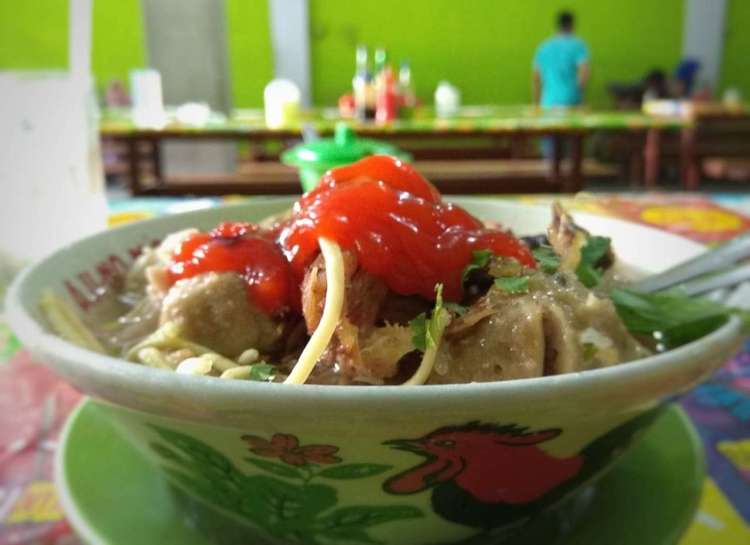 Mie Bakso Ayam Rahayu, it can be said that the oldest culinary meatballs in Lhokseumawe City, I don't remember when it was definitely established, but since I attended at elementary school, this outlet already exists, and it's now continued by the children of founders, "Ibu Rahayu".

Mie Bakso Ayam are the main menus for women here, I often 'ngebakso' - the term familiar in Indonesia for meatball lovers-- A week can be 3 to 5 times.

Mie Bakso Ayam Rahayu are known as Original Meatballs sauce with sprinkling of fried chicken, although now passed on by their children, the meatballs that are presented are unchanged tasty, still like their predecessors.

Here you can order various types of Meatball ; Mie  Bakso Ayam, Mie Bakso Daging etc. also provides a variety of soft drinks and fruit juices. As usual, I was accompanied by My hero today to eat the legendary Mie Bakso Ayam in the city of Lhokseumawe, Mie Bakso Ayam "Rahayu", Lets see the stall!

"You could see the  seat here, it's classic, you felt at the canteen of the school or dormitory kitchen room"

''So tasty, looks the meatball, it's perfect"

"You also could make the other taste, in the bottle there is; Vinegar, Chili Sauce, Chili Pepper, Soy Sauce, Sweet Soy Sauce, which must be according to taste?"

"Before added the other sauce, soy etc"

"After make a taste!"

"Enjoy it with my children at Mie Bakso Ayam, Rahayu.."

Mie Bakso Ayam "Rahayu", the oldest meatball stall in My city
This post participated in the Tasteem contest All about noodles

Thank you for entering our <All about noodles> Contest . Thanks to @ericha, Tasteem has become a more attractive guide. We upvote your post, wish you the best of luck in winning our Contest!

Nice to hear, love to be part of the game

That bowl says it all! I love that it has so many stuff in.

Thank you .. excellent! You enjoy it.. greeting...