Always mischievous and brave, until the butt lies in the grave 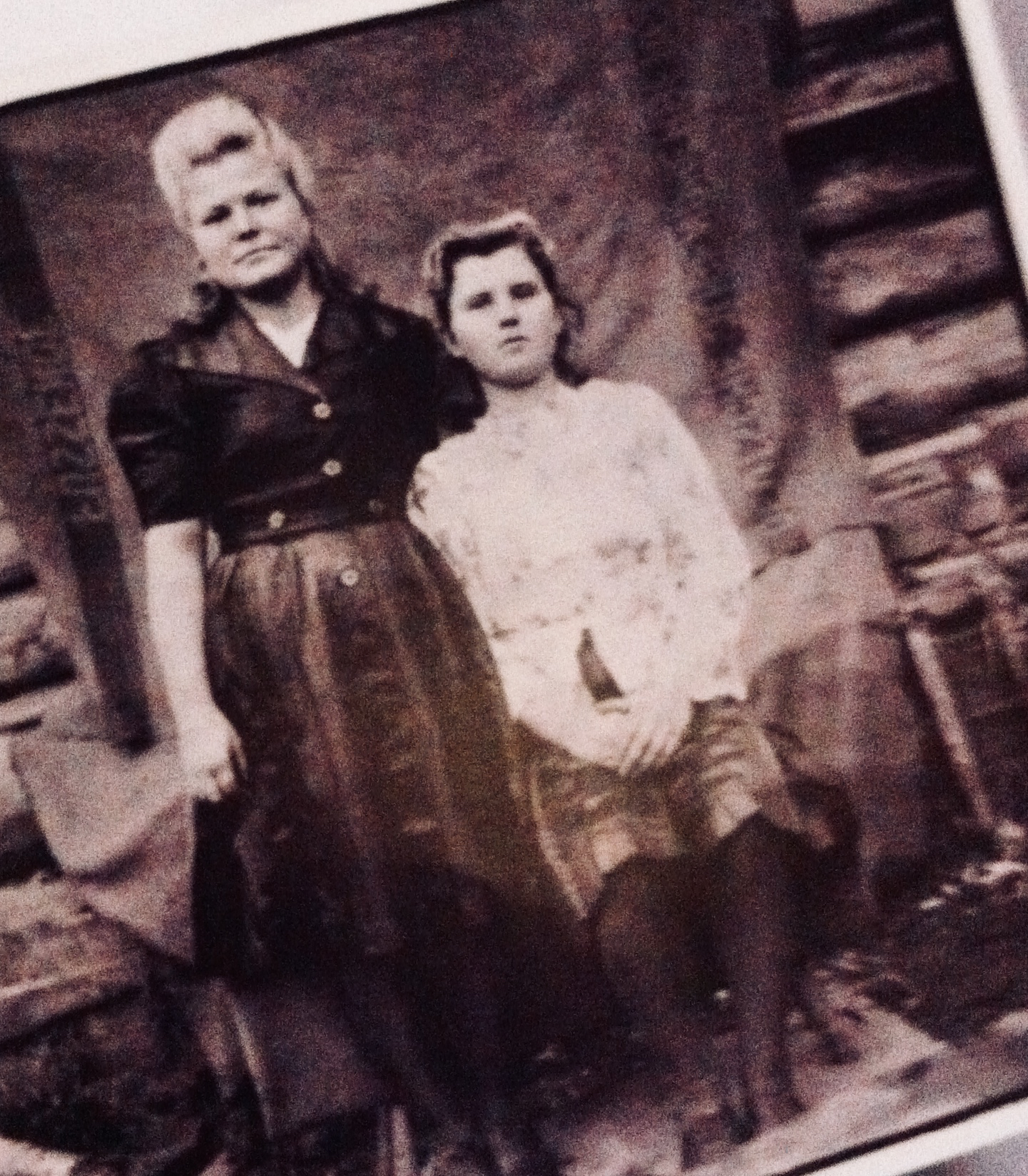 My mom is the blonde one, standing next to her sister

My mother used to say those things a lot. She astonished me in good time with such impertinent sayings. I liked them much more than her sour moral side, which I felt just as often. She had a talkative nature, which, when she was light-hearted, made her very entertaining for all listeners. She could narrate like a true storyteller.

Many of her sentences began with "Now listen once!" But not in this commanded way, not demanding and compelling, but rather suggesting something exciting and enthralling. My ears were sharpened immediately! I knew from childish experience: Now came something good!

I was never disappointed. She knew how to keep a story in the necessary tension. You couldn't help but want to hear more. I loved her for it.

There is a picture of her (it's not the one from above but another one I don't have at my hands right now) that very clearly emphasizes the strong part of her personality. When I think of her, I often have exactly this image in mind. One hand hanging loosely relaxed with her arm down on the armrest, the other hand in her lap. This indicated a mischievous way of her being. No hard rigid will, rather a light, but therefore no less unbending attitude. In her gaze an encouraging way to follow her. An invitation.

to keep on preserving oneself in old age like a child who does not yet know the world from its supposedly realistic side, is probably the most admirable thing I can say about my mother. But one should not be mistaken, nor should one think arrogantly, that someone who is seventy or eighty years old is not experienced in life and does not know the ugly moments.

To accuse someone of naivety says more about the critic than about the naive. Because his naivety is already explained by this word. I often felt anger when I was accused of such a quality. I felt unjustly treated and judged. But when I ask: How can you actually accuse someone who just makes it clear to you that every person can be seen by you at any second as a blank page, isn't it rather difficult to give an answer?

So it remains for me rather to thank someone who calls me naive, because until then I really didn't know that I was. How beautiful!

Of course, when I thank someone for classifying me as naive, this gratitude must be felt with all my heart and joy.

The moment I pretend to rejoice destroys authenticity and should I still make the mistake of thanking my interlocutor for this compliment, I feel his fury. He will think, "Does she want to take me for a fool?

I have tried it all already. Therefore, I know that as soon as strategic thoughts creep into my existence, there are no winners in expressing such a thing.

Such a courageous act of thanking for something insulting probably requires a higher form of spiritual insight than mine does. But if I manage to really feel this in a humorous fashion and irritate my conversation partner in an artistic way, then I should apply it. The irritation should not serve my pleasure, but the well-being of the one to whom I want to give something good. My own pleasure will then follow just naturally.

It's understandable that sometimes you do something quite stupid.

This is forgiven as long as the intention did not involve malice. Forgiveness by you, not by others! The tricky thing about one' s own mind is that it often thinks that it acted in malice when it was not sure at all about it's intention. So when uncertainty about ones motives comes about and someone else offers an accusation it is likely to be taken. What was half designed becomes then certain and therefore true in that moment. Like someone saying: "You liar! You did that on purpose!" And you, surprised and insecure, feeling caught and now accepting the judgement of the other as true.

The king and the fool

What does it all mean? That someone just wants to hear and have the good stuff? That I want to live on an island of cheerful and mischievous people? Not at all. The mischievous only makes sense if, like the fool at the king's court, I risk my life and limb by not bowing to his power to the last. The fool has learned the art of amusing the king and turning his occasionally rising narrow-mindedness into laughter. You could now see the fool as dependent and an opportunist, if you like. But you suspect that this is not all true. The king is as dependent on the fool as vice versa.

What I find interesting is that the king gave the fool the mandate of giving him a satiric image or persiflage to stay humble when needed. The fool therefore is a clever and empathetic entity, if you ask me. To also survive the kings rage and fury makes him sharpen his skills ever so often. I admire the fool and I think, in the game of life I am more often the king. :)

Nowadays it's not easy to really risk life and limb. Rather, we stay in symbolic spaces, where we get the impression that it was about head and shoulders, but we live quite safely in the civilized world. Warriors and new unknown spaces: it's in the movies or in areas nobody dares to walk into. If you do, people call you foolish.

Recently I was talking about the expression "skin in the game".

This risking one's skin in the game is highly respected by many, and is pursued consistently by few. You can cry, lament and say to yourself that humanity is a corrupt bunch of cowards and accomplices. Which, of course, is not true in all consequence. Yes, there are cowards and bribes, but who can throw the first stone here?

How much we love books, films and plays that show us the fool and the king! How much we admire the characters with integrity. How much we wish their example would pass to us.

But do we go out and act like fools? Aren't we very afraid of being labelled foolish, naive and stupid? Is that reprehensible?

Can you always be the fool, the naive, looking as if you take nothing really seriously? Alas! It's really not necessary to say that, nor to want to be. The fool also has people for whom he mourns and cares, just like the king and all his people.

The problem is that we often aim wrong, always want to be something "like that" when we could be something different depending on the situation. To really bring out the situation and the character spontaneously is what I call ability.

I'm really not a friend of treating all people equally.

Everyone should be treated differently, according to situation and event, according to the rules of certain codes and habits that are well known and not entirely alien to him. Do I have to know all his customs and laws? Hardly. But I can listen to the language of the body, to where I see that a person begins to feel uncomfortable and to take into consideration what he is carrying and what he does not want to carry. Basically, I am in favour of trusting someone else to do more for becoming mature than he trusts himself or is told by others.

Maybe you can't imagine how angry I can make my fellow men with it! It is surprising, again and again, how much someone can refuse to look at his own helpful potentials.

This little kid - the tiny me - I am in wonder with. I do not recognize myself in that picture, yet I do. All potentials laying ahead of that child. Still, a lot to discover, still time to wonder.

I went into your reflection, I felt your mother's wise words and how her life was, a mother knows more than the devil himself. This made me understand that sometimes being silly is fine, we will all be silly once or twice in life, right?

Being silly is fine. I agree. Silliness is sometimes the only thing saving me when I feel down.

Hi Erika,
I have to physically check to see if you have a new blog...I don't have automatic notification. Glad I caught this gem. So far I've only missed one of your posts.

I love this. Reminds me of a discussion we had in the comment section of my last post, about being naive.

So hard to know ourselves... you seem to be skilled at that. We can't accept the judgment of others (about ourselves), even though they know us well. Because there is always a hidden self (in my case, anyway).

Is it possible to be naive at 70 and 80---ha ha that hits home :) To have lived a challenging life and still meet people and see the best in them? Until they prove otherwise. I think we can insist on seeing light and not dark. It's sort of a survival mechanism.

So many lines jumped out at me:
"The king gave the fool the mandate of giving him a satiric image or persiflage to stay humble when needed"
" when uncertainty about ones motives comes about and someone else offers an accusation it is likely to be taken"
"The irritation should not serve my pleasure, but the well-being of the one to whom I want to give something good"

I'm so glad this post is receiving the recognition it deserves.

With appreciation and affection,
Your at-the-moment cheerfully reflective friend 😇
AG

Yes, this blog was a mix of the thoughts I had after recent encounters here and elsewhere. I knew that you would notice it.

You picked the main messages from it :)

LOL, I really was hoping that you felt also addressed, mentioning the age.

This is a very thoughtful post. I must admit that it was a little difficult to read as the topic is difficult. I would never say that I know myself completely and sometimes I'm shocked how other people are confident about some things that they're saying about me. And that makes me confused about myself. I regularly have to take some 'me' time and think about who I am as otherwise I would easily believe the things that I hear about me..

Thank you for sharing and have a lovely day!

I am glad, you enjoyed digging into it, despite the perception that it was difficult. I favor difficult things, they make us mentally stumble. Easy is easy, right?

Self-knowledge is really really difficult - the better one knows what is called "self" the better one might understand others. Yes, I also felt the shocks you talk about, there is a way, as wise people say to find a way to deal with those ego-shocks. Which I mean positive.

I agree that we can treat people differently, depending on the situation at hand like you said. You have a great mother.

She was quite a character.