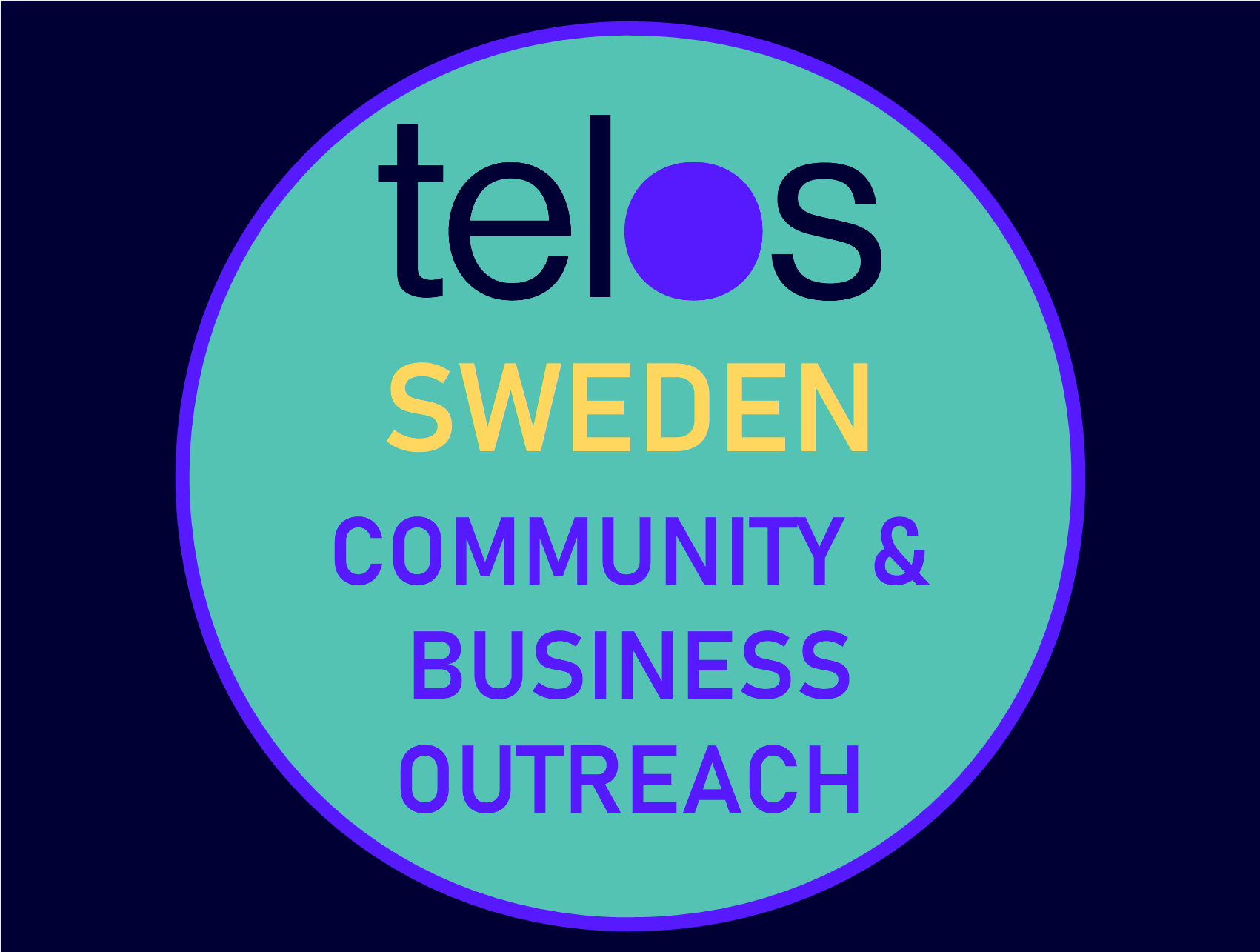 Telos Worker Proposals (now named Telos Works) are the way that Telos users (TLOS holders) can guide and pay for the development, promotion, and growth of the Telos Blockchain Network and the whole ecosystem. Telos is the first EOSIO blockchain with a functional Worker Proposal System (WPS) and one of the only projects in the blockchain world where all users can vote to determine how network funds are used.

Read more about the about Telos Works here https://medium.com/telos-foundation/telos-user-guide-tutorial-worker-proposals-b9b5f422ef08

Telos BP swedencornet (ICON/EOS/Telos Sweden) is one of the founding members of Telos Launch Group and has contributed to GRC (Governance, Risks Management, and Compliance), Security, Marketing, as well as other Telos Working Groups.

Now we have submitted our 1st Telos Works for Sweden for "Community and Business Outreach" after considering feedback and updating the proposal again and again... It is now your time to take action and see if Telos really Works for Sweden.

“We are confident that new innovations in Blockchain Technology and Business Models have the potential to fundamentally change The Global Economy and Social Systems. It has the potential to empower its communities, it’s user base, as well as involved stakeholders. We are deeply committed to contributing to the growth of transparent and fair blockchain-based ecosystems.”

To read about our WP 91: "Telos Nordic / Swedish Community and Business Outreach", please follow the link https://chainspector.io/dashboard/worker-proposals/91 and support us.

BP swedencornet with some of the early adopters of Telos / EOSIO want to take Telos to the next level. We want to set up the path for the mass-market adoption of Telos. We think that in order to ensure mass-market adoption, we need to involve people from all segments of the society; including but not limited to:

BP swedencornet is one of the founding members of Telos and has been an active part of TLG (Telos Launch Group) from the very beginning. We have been contributing in Telos Working Groups “Security”, and GRC (Governance, Risks Management, & Compliance) as co-Chair and have been credited co-author of almost all Telos Governance Documents. We have also contributed in marketing and social media activities (including numerous videos and posts) during and prior to Telos Pre-Launch.

We are based in Kista, Stockholm, Sweden. We are located at the industrial hub of Sweden (the home and The Global Headquarter of Ericsson) with close connections to numerous enterprises (such as IBM, HP, ABB, Microsoft, Future Games, TATA, etc.) and tech universities. We also have the background from (and presence) in Asia where Blockchain can play a tremendous role in the development of the society. We are also connected with The Global World (57 member countries of OIC) via IUT http://www.iutoic-dhaka.edu/. The initiation of activity in IUT means to have a social impact on 57 countries.

Now, it is time for us to take Telos to the next level together with early adopters of Telos. To secure our vision for Telos, to see it's becoming one of the top choices of blockchain platforms to run The Global Economy, Decentralized Governance, Social Systems, and variety of Applications to serve all kind of segments of society, we have applied for this proposal “Telos Nordic / Swedish Community and Business Outreach” to start with. We hope you will support us to secure the necessary funds to start work for building Nordic / Swedish Telos focused Community and Business Outreach. Sweden is known to be a peaceful country that has favorable conditions for blockchain. Sweden is also one of the most modern ICT countries that had taken huge steps in the past in accepting new ICT innovations. Industries and Universities in Sweden are tightly connected to test and try innovations. The Swedish National bank (https://www.riksbank.se/) is already conducting experiments to test blockchain-based e-Krona.

There is a possibility that some future blockchain-based e-governance and other mass-adopted DApps may originate from Sweden. It is possible to bring some of these Dapps on Telos.

Initially, we will be focusing our work in these 4 areas:

We will build Telos / EOSIO focused community. We will be conducting Meetings / Events / Meetups with Youth, Professionals, and people from all other sectors of society.

We will emphasis on Youth from Schools, Universities, and Professionals from a variety of industry segments. We will interact with Developers and Students from schools / universities to attract them to create a variety of projects (including DApps) on Telos Blockchain Network (TBN). We will give them awareness, education about basic concepts of Telos Blockchain and to guide and help them to initiate student projects (thesis work) paid partially or fully by Telos WPS (as needed). We will also interact with new startups and research students.
As stated above, some of the schools that we have in our reach include Stockholm Science and Innovation School https://stockholmscienceandinnovationschool.stockholm.se/, KTH https://www.kth.se/ (The biggest Technical University of Sweden) ICT Innovation students https://www.kth.se/en/innovation, Stockholm University (Department of Computer and Systems Sciences), and there are also a lot of ICT Industry regional headquarters around us.

We will host monthly meetup events with targeted advertisements and networking. We will also hold ad-hoc meetings as needed with interested stakeholders. This work will also require some printing materials, presentations, travel, a rental place to host the events, preparations, etc.

For Meetups / Seminars we expect following time / costs (these are estimations):

Note: On top of monthly meetups we will also conduct ad-hoc targeted meetings with Professionals / Developers / Engineers / Students / Teachers / Professors interested in Telos / EOSIO. We all 3 will spend additional time on this. As stated below, in all 4 areas (1-4) we all 3 people will estimate to spend minimum of 40 hours per week (collectively).

For consultancy costs in Sweden, you may look at https://www.glassdoor.com/Salaries/stockholm-consultant-salary-SRCH_IL.0,9_IM1136_KO10,20.htm (We are “not” requesting costs for all hours spent as you see below)!

Note: In the long run we will try to register Telos Community as “Förening (non-profit community-based legal entity) https://sv.wikipedia.org/wiki/F%C3%B6rening”. We will also look for the possibilities for collaboration and memberships with e.g. student unions, universities, professional organizational chapters; ISACA, ISC2, and so on. This may allow us to be able to book “Local Community Halls” for meetups on cheap prices (in the suburbs) and / or use ISACA, ISC2 premises on favorable conditions and / or university places. If we will be able to save costs on conference rooms (monthly meetups) then we will divert savings into further community development activities e.g. by creating small projects / assignments /activities done by new community members to promote Telos (in local languages).

We will develop Videos and Social Media Posts / Articles to raise Awareness, Promotion, and Education about multiple topics and features of Telos Blockchain Network. We will publish them in multiple channels; Steemit, D.Tube, YouTube, Twitter, Facebook, Telegram Community channels, etc.

We already, in the past, have created multiple videos and published posts (for FREE) in multiple social media channels.

We have a sound presence in some of the social media channels with healthy followers (We have already published 100s of Telos / EOSIO related posts, articles, and several videos during Telos pre-Launch. We have a healthy number of views):

We will now publish on average 1 video per month and at least 1 article/month along with weekly use of our social media channels for Telos Promotion. This will help in Marketing, raising Awareness, and Education.

We will create a community token “SWEDEN” on Telos Blockchain for the promotion of Telos and building the local community. This token is “not” intended for any monetary financial value. This token is purely intended to build community and to help us to promote Telos in the local community in Sweden. It will help us to attract school students and the local general public. We will be able to involve them in a variety of social media, and marketing tasks. We will also use it in local projects, POCs, Education, Awareness activities, and experiments as it gets support from the community.

We will also integrate SWEDEN with Telegram bot with help from EOS Cafe Block.

As stated below, in all 4 areas (1-4) we all 3 people will estimate to spend a minimum of 40 hours per week (collectively).

4. Promoting Telos in The Enterprise World with Industry Professional Peers

We offer to introduce Telos with our peers in the industry extending Telos reach beyond EOSIO world; focusing on Financial, ICT, Security, and Public Safety sector. One of us will be attending Security / GRC / CISO and Financial industry-related Exhibitions / Conferences / Meetings. We will use the opportunity to promote Telos in face-to-face round table and 1-to-1 meetings with top professionals in the industry. This will help to promote Telos beyond “EOSIO closed user group”, in The Enterprise World. We are very well aware of the core requirements, frameworks, standards, and best practices used in The Enterprise World for accepting and deploying new technology, services, and products. One of our core competences is 3rd party risk assessments. We are sure that we have the competence to promote Telos and build justifiable use case(s) for the enterprise world for the productive use of TBN (Telos Blockchain Network).

We have confirmed Syed’s participation in these two events (more maybe planned by us as deemed necessary):

It is a summit that is open to only selected individuals (top professionals) from Enterprise Organizations (CISOs, SVPs, VPs and Directors from $1B+ organizations). Topics include Blockchain (Becoming More Decentralized), Zero Trust Security Framework, Digital Transformation, etc. Roundtable discussions and 1-to-1 meetings are the core part of the summit where Syed will be participating.

This is focusing on innovations that are shaping tomorrow’s financial institutions, such as blockchain and robotics in banking. It has a target audience as Nordic C-level executives and decision-makers. It has peer-to-peer networking sessions as a core part of the program. Syed has been invited into this event.

Syed’s participation in the above 2 events and promoting Telos, in general, will be “bonus” for Telos. We have already reserved/booked Syed's participation and it will cost almost nothing in this Telos WPS for above 2 events except that we will need some printing material / brochures. We are going to put minor costs; 100 USD per cycle.

Annex - People behind this Telos Works for Sweden

Thank you for sharing your work model to expand the Telos ecosystem, hence a great reference point.