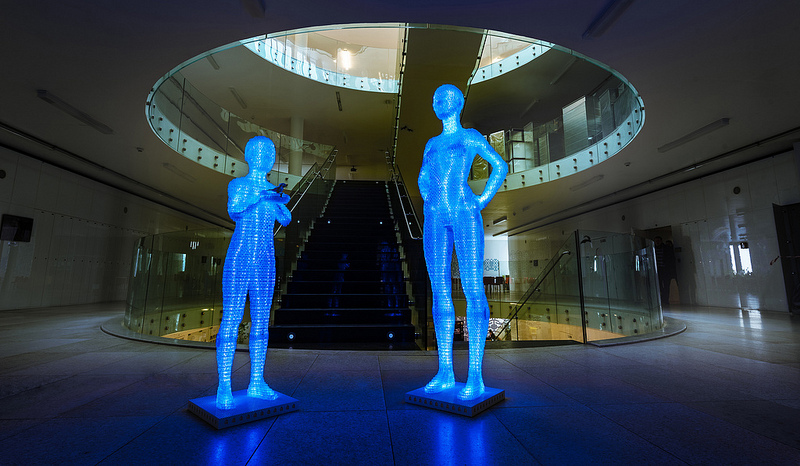 The other day (well, about two decades ago, around the millenium) I met this really interesting person. She was introduced by a mutual friend. "Let's have a party", was his life motto. But this time, no party. My friend was send to Denmark for a business meeting. Not the usual office type of meeting. Nope. It was a marketing event. With Lego. At their theme park in Billund. All expenses paid. His boss told him it would not be a problem to take someone with him, so here was I.

It turned out Lego planned this event to showcase their newest product; A giant Lego 'Puppet', the first ever Lego product with AI build into. My friend's company was contracted to design and run the marketing campaign; My friend, the one who created the campaign.

It was early in the day we arrived at the main park at Legoland, the place of happening. A gigantic area covered with something; Looked like a super mega large army tent, one you may know from movies, but then 10 times bigger, at least. "Do we have to go inside?" What a shame, since this was the first sunny day in months, with temperatures such that being outside was by far preferred to hanging around in a tent.

Soon we discovered differently, just after an intro tune played on the most massive speaker system I've ever seen and heard, suddenly the whole tent disappeared, revealing the newest product of Lego. Turned out not to be just one 'Puppet', but hundreds of them. They looked almost like humans, a bit edgy and block-ish, but still. A 'tat' larger than the average humans in my own little country the Netherlands where most of us are pretty tall. All Lego 'Humans' standing in line on a stage so we could see them in full.

After the first OH's, WOW's, and WTF's, I noticed something unusual. Looking at their feet, I saw some metal-ish construction between the lower legs of the Lego Human's. "Is that...? Am I...? WTF! Why do all Lego Humans have shackles between their lower legs?" Turned out the Lego Creations not only had shackles between their own legs, but also connected between all other shackles. Lego Humans powered by AI but somehow in-prisoned as if they were criminals. Later that day we were told by a representative of Lego, the shackles is Lego's answer to contain the AI. By limiting the physical moving space of the Lego Humans, the AI could be more free in its own choices, allowing the AI to be more open to determine its own route of evolution.

A little later, I got the biggest shock of my life. Ok Ok Ok, I exaggerate! It was by far from the biggest ever, but wanted to add some drama to this story :) Out of nothing a massive sound approach me from the rear; As if a large amount of coins dropped to the ground with massive force. It took at least a few seconds before I turned around and was dumbstruck seeing what was played in front of my eyes. From high up in the air - so high I could not determine the source - something that looked like super large Euro coins dropped to the ground, creating a little hill in no time. "Where does all these coins come from"? No plane or helicopter in the sky. A steady stream; A big stream!

While I was still wondering and trying to understand the source of the coins, something started to move at the bottom of the pile. Within seconds, the movements seem to increase, as if something was inside the pile and trying to get out. Then the most amazing event happened in front of me (this time I'm not exaggerating); Pure Magic! Slowly the coins moved sideways and up-ways shaping a tunnel while new coins still dropped from the air to further increase the size of the pile which by now grew to at least 24 meters high and 42 meters wide. I suppose also about 42 meters depth, but couldn't see this due to my viewing angle. In fact I was right in front of the tunnel. Dark as it can get; More black then the best OLED screen black mode. Although the sun was behind me; It did not light the tunnel. "Strange!", I thought: "Why the hell can't I see more?" As if the tunnel swallowed all light, like a black hole.

Then something started to move in the middle of the tunnel; Something appeared! One of Lego's AI powered Humans? Maybe; Still to far a distance for me to conclude. A short - very short - time later, a beautiful woman walked out of the tunnel; Dressed in a complete white outfit including shoes and even her jewellery. Only her hair was not white, and her skin. While watching her - still wondering what was happening, the coins, where they came from, the tunnel, the woman who seem to have lived inside the pile of coins - I got another shock when I saw her coming closer and closer to where I was standing. I looked around, to the left, right and then to the rear trying to get clues to where this lady was heading to.

The moment I turned my face towards the tunnel entrance again, the gorgeous woman was right in front of me, a little less than the length of an arm away. While she smiled a little, her lips started to move and I heard: "Hello handsome! Finally I found you!" Huh? Did I know this lady? "You may not know who I am, hence I'll introduce myself: I'm Miss Block and looking for my guy I intend to marry; I think that's you!". HUH? WTF? Really? "Euh...well...you are what?", I spoke with very low voice; So low voice I barely could hear myself. "I'm Chain, John Chain", I muttered.

photo published at About Crypto (source)

Since that day, I knew the whole world was lying, or at least the story what and how Blockchain was created was further from the truth than we could ever imagine. That day in early spring, I met my wife who I married that same day; In fact within an hour we felt eternal love, spoke our vows, kissed deeply, and signed the papers.

According to the Bible, Is it sin against God if a law enforcer is forced to take someone's life in the line of duty?

Thanks for submitting this to the Second Nonsense Writing Contest!
$trendotoken
!trendovoter

You're welcome and nice initiative that got some creativity out of me :) Talking and writing nonsense is definitely something that can add more fun to our community!

Thanks a lot for submitting an entry to the Second Nonsense Writing Contest post (or one of its follow-ups). Have added a link in the recent update.
!trendovoter tip

(hope it works this time)

How cool; Big Thanks!

The Beer didn't want to come, but Thanks anyway :)

Ok ok, I shall be patient then :) Thanks again!

Hey @edje, here is a little bit of BEER from @eii for you. Enjoy it!

Congratulations @accelerator, 25.74% upvote has been shared with your successful call on the post that shared by @edje!

I love it! Block Chain. Neat! That's a much happier AI ending than Skynet!

Tried to be a bit creative, Thanks :)