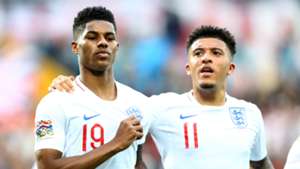 Their ability to get to the top of the international pecking order will solely depend on the Three Lions ability to resist the urge to become a Red Devils-style counter-punching team.

Too good for the bad teams, too bad for the good teams.

England over the past two or three years have not been the kind of team to put down. They win handsomely, against teams they are expected to beat, especially at home. At Wembley, Raheem Sterling scored in a 5-0 win and later, at Podgorica, they took Montenegro apart.

back in the spring they had far too much for the Czech Republic with Raheem Sterling scoring a hat-trick in a 5-0 win. A few days later they went to Podgorica and took Montenegro apart.

Bulgaria are unlikely to trouble England in London at the weekend and will instead try to resist as best they can until the inevitable happens.

The trio of Marcus Rashford, Raheem Sterling and Kane would make them blaze to greater stardom.

One mistake I see England making over and over again is their failure to retain the ball, to play their natural game. They should work on this so that they don't concede cheaply when faced with teams more voracious than that of Bulgaria.