SURPRISE BONUS SHARING ROUND! - Everybody is welcome to join! - Thousands of STEEM in prizes! This is Round 5, a SURPRISE BONUS ROUND! Near the end of this post you will find the qualifications to nominate your project for long-term support - each week there are be bonuses, rewards and opportunities, and the projects that never miss a week compete for the grand prize!

NOTE: Several have asked me - 'How long does this contest go?' While I have some idea to continue the weekly participation until I reach a certain level of INCOME distrubuted - the GRAND PRIZE POOL is an elimination prize, and thus it depends on the participants how long it shall take to win.

*Weekly Prizes for qualifying participants; Giant Prize pool for the groups that go all the way!

8 projects continue in the search for grand prize pool, and have shown success this week by way of being supported by a user selfi w/ handmade and local elements. They are:

Congratulations to the above listed projects! The grand prize pool is drawing ever nearer. If you don't see your project on that list, you are still encouraged to compete for the participation prizes, which will increase the votes a project receives over time.

Although I have (already!) failed to stick to a Friday schedule, we are still going forward. I will be stepping down my attempts to contact each participant individually. Now I am thinking about some plans to publicize the weekly participation prizes....

This section is open to all participants, even if they are not on the list to compete for the grand prize! 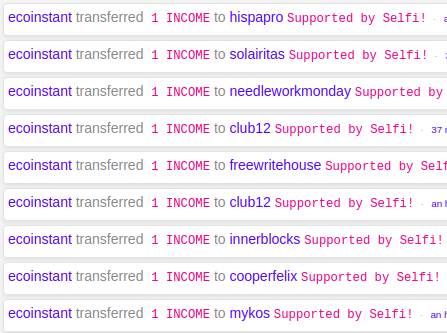 All of the projects that succeeded this week they have been given an INCOME token, double points for those that had more than one selfi in support of them. Congratulations to the same projects, we had no hop-ons this week:

These prizes come from my personal stash of INCOME, which is an entertainment token, because laws. It is designed to pay out its entertaining dividends as SBI units, and simply holding or hodling INCOME is enough to get entered in 5 daily SBI draws. Buy some here or earn by participating weekly!

This week, a bonus was achieved if qualifying SELFIs also appeared on Twitter! Let's see the winners! 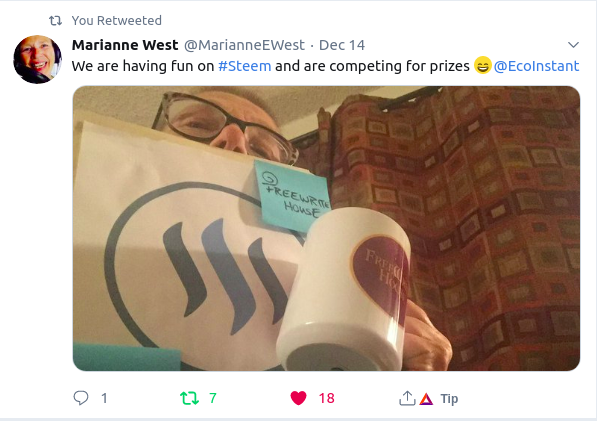 Thank you @wishmaiden, @definethedollar and @mariannewest! You have been nominated for two SBI units each!

A special shout out bonus to anyone who nominates a project this week that is not on the Grand Prize List. SBI units to any such projects, but 5 units to the first person to do so; just check the weekly rules and earn support for your projects!

Learn about how to SELFI here. It doesn't matter who holds the camera. You can use your kid or your dog or a mask, just make sure a part of you is in the picture.

We have the wildy talented @improv, who hosts the delicious Punday Monday weekly competition. Another fantastic font of funny and SBI, keep your eye on PUNDAY MONDAY for a Christmas Special!

Here as well is @maxuv, who has generously donated 500 MAXUV votebonds to the prize pool. These asset-backed vote bonds are designed to deliver votes relative to 1 million SP. Anti-reward curve vote bonds - availabe on steem-engine!

Whether its SBI units or MAXUV votebonds, support and utility powers are only as good as the account they are buffing!

We also have a new sponsor - @UpFundMe! I am entering each participant in the weekly lottery, and will explain more soon on the really cool things I am finding out about #UFM. 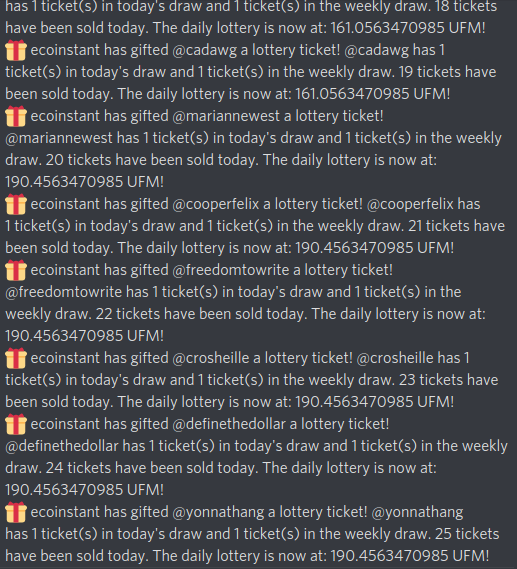 Since #STEEM gets its value from what is built on top of it, shouldn't we all choose quality projects to support long term?

Let's Get in and DO JUST THAT!

Rules: Share your favorite selfi from the last 3 weeks on Twitter! If its a new project, create a selfi that would have qualified for any of those weeks, and share that. BONUS PRIZES: Participants will be distributed bonuses based on their response on Twitter.

Hi @ecoinstant, a free $trendotoken from the TULIP Mania Game!
Round 3 will start soon and full details will follow. Thanks for playing!

Congratulations @busbecq, you successfuly trended the post shared by @ecoinstant!
@ecoinstant will receive 5.33385000 TRDO & @busbecq will get 3.55590000 TRDO curation in 3 Days from Post Created Date!

Congratulations @rycharde, you successfuly trended the post shared by @ecoinstant!
@ecoinstant will receive 4.72191525 TRDO & @rycharde will get 3.14794350 TRDO curation in 3 Days from Post Created Date!

Yay! Thanks so much for this opportunity!

You just received DERANGED @ecoinstant Keep up the great work, view all your tokens at steem-engine.com

Hey @ecoinstant, here is a little bit of BEER from @definethedollar for you. Enjoy it!

I'm back again to support @heyhaveyamet!

Thank you so much for the lottery ticket @ecoinstant!

Here’s @needleworkmonday’s entry for Round 5!

Hello! I am convinced. If you want to leave a link I would press the heart under the photograph.

Another week another selfie

Britt I am coming to discord - Let's get this picture on twitter!

Your post was upvoted by @steem-ua, new Steem dApp, using UserAuthority for algorithmic post curation!
Your UA account score is currently 5.086 which ranks you at #1039 across all Steem accounts.
Your rank has not changed in the last three days.

In our last Algorithmic Curation Round, consisting of 84 contributions, your post is ranked at #21.

Thank you immensely with the mention and all the support you always give to our community. A hug for you and all our support, dear team @ecoinstant. We're Club12.

Hoping this qualifies, and please let me know if not.

Yes this is perfect! Is this a retweet with comment? Let's find the right words! This phase of this contest is the result of what we talked about many months back, I have been slowly getting this set up.

The idea is tweets/retweets/whatever-you-just-did-there are awarded with SBI (and now UFM) and the projects (freewritehouse in this case) get awarded INCOME and compete for the grand prizes. Let's show twitter what is being built on steem. Any way you can help me get the word out on this, any advice you may have for me or for the contest about using twitter effectively, would be greatly appreciated.

Yes, this is a RT with comment. @ecoinstant. Rt's are very good compared to replies. My RT has already been RT'd.

I think encouraging RT's would be good and also requiring the #steem tag. Posted with ![](https://cdn.steemitimages.com/DQmbroYujK9LNd2s8zDKPUCADmseyJDuNbhwBPrrF7xM8FL/logo-comment.png)

Thank you for using the #build-it tag. This post has been manually rewarded with BUILD tokens in the form of an upvote. You can buy, stake, and exchange our "BUILD" tokens for steem on steem engine or SteemLeo

Build-it is a central hub for DIY and How-To projects. It's an opportunity to find and share the latest in DIY, and How-To tutorials. The recommended tags required when creating a DIY article are #diy, #build-it. #how-to, or #doityourself. Please read our guide

Hello, Steemians. Congratulations to the contest participants who have come this far.

CooperFelix-Multiservices is also on Twitter. We therefore invite users to follow our page to be always up to date on the events and news that the company has in store for you.

The image is owned by the author and the use, reproduction or quotation without authorization is forbidden

The CooperFelix-Multisservices invitesthe users to take a look at the objectives of the project, hoping for your participation THE CF-M Project on Fundition or following the project at the link: THE CF-M PROJECT. 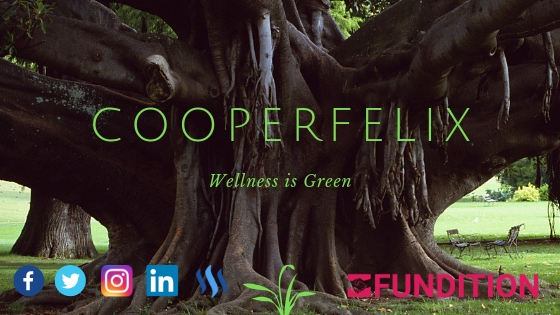 The image is owned by the author and the use, reproduction or quotation without authorization is forbidden
20.12.2019 10:43
1
#