History of the Aceh War Against the Legendary Dutch. 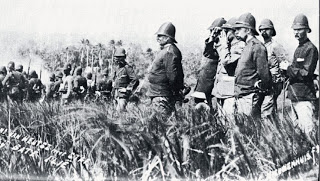 History of the Aceh War Against the Legendary Dutch.

As long as the Dutch colonized Indonesia, the war against Aceh was the biggest and longest war ever carried out. This war lasted for 69 years from 1873 - 1942 and claimed more than 100,000 lives from both parties. Since the start of the Dutch attack on April 6, 1873, this war has killed 37,500 people from the Dutch side and 70,000 people from the Aceh side with around 500,000 people who were injured. See also the European colonial period in Indonesia.

A Dutch military commander, Zentgraaff, wrote a book called Atjeh. In his book on pages 1 and 63, he expressed his astonishment about the Acehnese:

"Acehnese people, both men and women, are very persistent in fighting for their religious interests. Of all the war leaders who have fought in every corner of the archipelago, we have heard that no nation is so brave and fanatical in fighting except the Acehnese; the women also have the courage and willingness to sacrifice that far exceeds other women. "

In addition, a European journalist named Paul van Veer also wrote a book about the Acehnese with the title De Atjeh-oorlong. On page 301, he writes:

"Aceh was the last area which was conquered by the Dutch and was the first area to be released from its power. The departure of the Dutch from there in 1942 was the last time he was on the earth of Aceh. For 69 years, the Netherlands has been incessantly fighting in Aceh and this is more than enough. "

Background to the History of the Aceh War Against the Netherlands

All wars occur for a reason and there is a background that triggers this war to occur such as the history of the Arab Israeli war and the history of the Banjar war. In the Aceh war against the Netherlands, there were several reasons that caused the Dutch to attack the land of Aceh in 1873, namely as follows:

The Dutch occupied Siak and as a result of the SIak agreement in 1858, Sultan Ismail surrendered the Deli, Langkat, Asahan, and Serdang areas to the Dutch. Even though these areas have been in Aceh's power since the time of Sultan Iskandar Muda.

The Dutch violated Siak, and caused the end of the London agreement, where the Netherlands and Britain made provisions regarding the boundaries of the powers of the two regions in Southeast Asia. Therefore, the two countries now recognize Aceh's sovereignty.

Aceh accused the Dutch of not keeping their promises, so the Acehnese sank Dutch ships that passed Aceh's waters.
The opening of the Suez canal by Ferdinand de Lessep and causing Aceh waters to be very important as trade traffic.
The 1871 Sumatra Treaty was made between the United Kingdom and the Netherlands, where the contents in the form of Britain gave freedom to the Dutch to act in Aceh. In addition, the Netherlands must also maintain the security of the Sumatra Strait traffic, allow the UK to trade freely in Siak, and surrender its territory in West Guinea to the British.
From the background mentioned, there is a special background to the Aceh war, where this occurred before the war.

Because of the existence of the Sumatra Agreement, the Netherlands became arbitrary in taking action in Aceh. Because of the ambitions of the Dutch who wanted to control Aceh, the Dutch did not hesitate anymore to demand that Aceh submit to the Dutch. The demand was rejected outright by Sultan Mahmud Syah and rejected all Dutch demands. Until March 26, 1873, the Netherlands declared war on Aceh.

Chronology of the History of the Aceh War Against the Netherlands

Year 1873 - 1899
The first Dutch attack on Aceh was carried out with the arrival of Dutch troops and warships led by Major General Kohler. He targeted their troops' first attack on the Baiturrahman Great Mosque in Aceh. The Acehnese troops intensively welcomed and fought the Dutch troops. Until April 14, 1873, Kohler was shot dead by the Acehnese and Dutch troops could be released.

After Kohler's death, Dutch forces again attacked Aceh with Major General Van Swiyten as its leader. They continuously guessed the cannon at the Acehnese forces and finally Aceh was pressed to vacate the palace. As a result, Dutch troops occupied the palace while Kingdom families and relatives fled to the Lheunbata area.

However, the Acehnese did not give up in fighting for their freedom. After the palace was occupied by the Dutch, Acehnese clerics and nobles were ready to fight. Cleric troops named Pasukan Jihad, led by Teuku Cik Di Tro. While the Acehnese were gathered and made a large force with Teuku Umar and his wife, Cut Nyak Dien, as their leader. The attack led by Teuku Umar was launched into Dutch posts until in 1882, Acehnese forces were able to take control of Meulaboh. Then in 1886, the Acehnese troops also immediately attacked the Hock Canton ship that had just docked. Increasingly, the Dutch are increasingly overwhelmed and haunted by terror from the Acehnese forces. Also check out the history of the establishment of Al Washliyah.

Various tactics have been carried out by the Dutch forces to repulse the Acehnese like Stelsel's tactics and sheep fighting, as well as the history of the Padri war, but his tactics have always failed. A Dutch General named General Deyckerhoff argued to use Devide At Impera's politics to influence Teuku Umar. However, the political situation was exploited by Teuku Umar, where he pretended to surrender with the intention of obtaining weapons from the Netherlands.

Year 1899 - 1942
Van Huetz's attack was very blind in February 1899 and made the Acehnese forces pressed. Aceh must retreat to the Meulaboh area and in the attack, precisely on 11 February 1899, Teuku Umar died in battle.

But other troops also did not give up even though Teuku Umar was gone. The troops led by Panglima Polim and Sultan Muhammad Daud Syah continued to intensify attacks on Dutch forces by moving around until they survived on the Batlelile landscape. In January 1901, Van Heutz attacked massively on the Acehnese forces and forced Aceh to withdraw from the fort, so that the Dutch succeeded in taking control of the Batlelile fortress.

The war continued until 1903 where several relatives of Sultan Muhammad Daud Syah and Panglima Polim were captured by the Dutch, causing them to surrender. The struggle of the Acehnese people was continued by Cut Nyak DIen and Cut Meutia, where Cut Nyak Dien was finally caught and exiled to Sumedang. Cut Nyak Dien died in Sumedang on November 6, 1908 and Cut Meutia died during the battle in the Pasai Forest on 1913.

Although Sultan Muhammad Daud Syah signed the Peudele Plaque Agreement Letter, which meant the Aceh Sultanate was subject to the Dutch, the Aceh struggle did not stop there. From 1914, Aceh was still fighting until 1942, when the Dutch colonialists left Aceh as one of the founding histories of Indonesia. And dozens of Aceh battles that took place were known throughout the Dutch East Indies.

The struggle of the Acehnese in fighting for Indonesian independence is still admired today. Because without their persistence through the History of the Aceh War Against the Netherlands, perhaps Indonesia would have more difficulty achieving independence. I hope this information is helpful.

Source
Direct translation without giving credit to the original author is Plagiarism.

Repeated plagiarism is considered spam. Spam is discouraged by the community and may result in action from the cheetah bot.

Please note that direct translations including attribution or source with no original content is also considered spam.