There Is Blood - On Your Electric Car 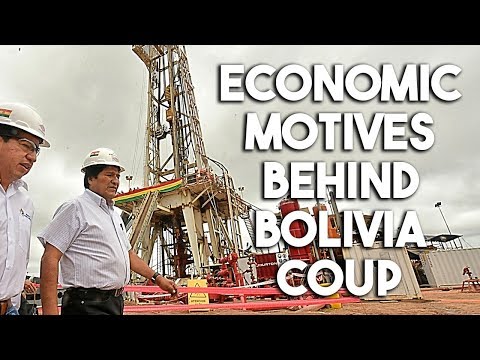 So this is how the imperialist template works, first economic Hitmen make a "friendly" visit and try to bribe the targeted politician(s) - then when that doesn't go according to plan the Jackals are sent in and and begin to finance the opposition paving the way for a (military) coup, when that failed too "assassination" is implemented.

But why this tme, what are the hidden financial motives -- LITHIUM!

Multinationals had to force their way through, had Bolivians remained the owners the labor needed to run those lithium operations would have been way more expensive. And that would have impacted the entire industry around the world. Now the usual suspects can not only buy the land but also hire as much low paid laborers as needed.

But there is blood on all electronics now -- and should society continue to fall for the "marketing trap", we are headed for another natural resource plunder, which will have far reaching consequences.

It is the latest attack on Life brought to us by and for capitalism. Any theory involving profit seeking is capitalism - some forms of capitalism being more extreme than others but they all lead to the same end result.

Tesla's stock rose Monday after the weekend right after the coup. And Elon Musk and the like are mere silent accomplices. How sick is this? World stock exchanges are hungry for despair, sweat and blood because that's the only way to make billions. And we need to wake up to this Truth!

The lowest wage in the county is about 400 BOB or almost 60 dollars per month. And the highest wage is 5 times that amount. Considering that the majority of population is native, multinationals will regulate all salaries in the sector as they see fit for the sake of their consumers.

Pro-growth economists estimate that by 2030, 125 million electric vehicles will roll on the roads, 40 times more than today. Which is a completely biased analysis because we are headed for a world crash within the next 3 to 5 years as we reported last week. Capitalism must remain optimistic otherwise it sinks down! And this makes the run-up for profit not only more senseless but also deeply cynical.

This is exactly why we have to intitiate Degrowth while pushing for the circular economic model - then shift toward RBE smoothly. A fully transparent system would make hoarding wealth impossible. The occultation of knowledge is the strength of the "endless growth fallacy".

Let's fix that and we'll not need money anymore!

Salar de Uyuni (Bolivia) (AFP) - Over 3,600 meters above sea level on the blinding white plain of the world's largest salt flat, landlocked Bolivia is dramatically ramping up production of lithium to cope with soaring global demand for the prized electric-battery metal. Bolivia, among the poorest countries in South America, sits on one of the world's largest lithium reserves, at the Salar de Uyuni -- or Uyuni Salt Flats -- ready to take full advantage in the coming age of the electric car. But while it sits at the apex of South America's "lithium triangle," along with Chile and Argentina, Bolivia has not had the capacity to produce the metal on a commercial scale. That will change when its Llipi plant comes online in 2020

The factory, guarded by the army because of the metal's value, will have an annual production capacity of 15,000 tons of lithium carbonate, project manager Marco Antonio Condoretty told AFP.
MORE https://news.yahoo.com/bolivia-huge-untapped-reserves-gears-soaring-lithium-demand-013650510.html

The case of Bolivia should sound the alarm for a manufactured coup at the expense of democracy. Not only was Evo Morales elected by a majority, he offered to run the elections again to prove it before mobs of right-wing opposition—fueled by the U.S. in material aid and alliance—burned Morales' sister's house, held another elected official hostage at gunpoint, and basically firebombed their way through government buildings and public infrastructure (public buses were targeted because they represent socialist reforms). These violent actions forced the president to resign—and the U.S. government supported it, cheered it on, even boasted that such violence was upholding democracy in the hemisphere. --- Meanwhile, tens of thousands of people in support of the president have assembled in El Alto to demand that Morales be returned as the rightful leader of the country, and people keep coming.
https://www.commondreams.org/views/2019/11/14/right-wing-coup-bolivia-exactly-opposite-what-democracy-looks

"Bolivia's lithium belongs to the Bolivian people. Not to multinational corporate cabals." The Morales move on Nov. 4 to cancel the December 2018 agreement with Germany's ACI Systems Alemania (ACISA) came after weeks of protests from residents of the Potosí area. The region has 50% to 70% of the world's lithium reserves in the Salar de Uyuni salt flats. Among other clients, ACISA provides batteries to Tesla; Tesla's stock rose Monday after the weekend. As Bloomberg News noted in 2018, that has set the country up to be incredibly important in the next decade: Demand for lithium is expected to more than double by 2025. The soft, light mineral is mined mainly in Australia, Chile, and Argentina. Bolivia has plenty—9 million tons that have never been mined commercially, the second-largest amount in the world—but until now there's been no practical way to mine and sell it. MORE https://www.commondreams.org/news/2019/11/11/bolivian-coup-comes-less-week-after-morales-stopped-multinational-firms-lithium-deal

Bolivian President Evo Morales insisted Tuesday that allegations of alleged fraud made by the opposition are a pretext for executing a coup, he told thosuands of supporters from different social movements as they gathered in the center of La Paz. (nov 2019)

Degrowth… Or Death? Giorgos Kallis, an environmental scientist and political ecologist at The Autonomous University of Barcelona, and author of the book Degrowth. In order to slow the economy down and not wreak havoc, he said, we have to reconfigure our ideas about the entire economic system. https://earthcustodians.net/blog/2019/06/17/degrowth-or-death/

"It is the latest attack on Life brought to us by and for capitalism."

This mischaracterizes collectivism as capitalism. It is not money but power that is seized by the corrupt, and not money but force their weapon to do so. You fundamentally misunderstand money, and thus are unable to grasp that institutional power is the problem that free society must overcome.

Money was merely one technology institutions used to seize the power of individuals to govern Bolivia. The more power society delegates to government, the less power individuals have to effect society. It was violent force that Morales fled, not money. Focusing on the financial aspects of society obscures how power is effected.

Thank you for increasing all our power by publishing this post and preventing institutions from deceiving us all to increase their power.