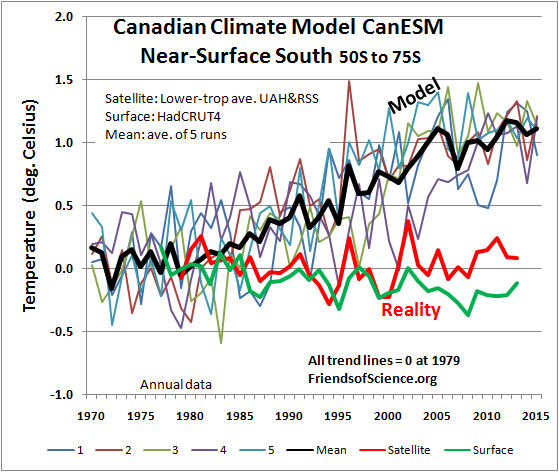 The entire argument about climate change is that the rise in temperature is dependent on CO2 levels. Based on this assumption, "experts" create models to predict what the future temperatures will be. The predictive models that Canadian scientists have developed have been an embarrassment. For instance, the Canadian Climate Model (CanESM) for Near-Surface South places a rise between 1979 and 2015 to be over 1 degree Celsius. The reality is that since 1979 surface temperatures have fallen. The temperature was roughly 0.1 degrees less in 2015.

Consider the climate model devised by Professor Valentina Zharkova, of Northumbria University (UK). Her model runs at a 93 percent accuracy rate. Her model isn't predictive of temperature based on CO2 levels but having to do with the activity of the sun. Regardless of the insulation of a house in winter, which would be warmer: the one with the furnace on or the furnace off? Off the 150 models currently at play in climate science, her model was one of two which accurately predicted that solar cycle 24 would be weaker than solar cycle 23. Her model also predicts that we are on the brink of a solar minimum which will mirror the Little Ice Age. This "Super Grand Solar Minimum" will last for 350 to 400 years. To come up with an analogy that some people might relate to I thought of a charcoal barbecue. We have just left a period referred to as the Modern Maximum. It is similar to the Medieval Warm period in that there was significant solar activity. In my mind, it is like blowing on a charcoal barbecue. This creates a very hot fire. According to Zharkova's model, we are entering what is called the Modern Minimum which will be similar to the Little Ice Age (also known as the Maunder Minimum). World-wide average temperatures during the Little Ice Age were at least 3 degrees lower than they are now.