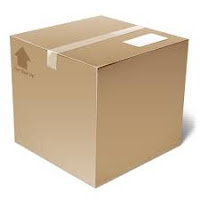 An acquaintance recently had a problem with an eBay package.

It was one of those UPS shipments that gets handed over to the USPS for final delivery.

Saturday, the tracking said the package had been delivered the day before, but my acquaintance hadn't gotten it.

The post office here is closed on Saturdays, but she went and knocked on the door and they answered. She asked for her package but was told there was no package. Checking the tracking number showed it had been picked up by someone with a completely different box number. They said they'd look into it on Monday, but maybe that person would realize the mistake and return the package.

Not being content to let things sit for two days on a package worth over $100, she used the box number given by the post office and an internet search gave her a name and address. A further Facebook search showed the person had one mutual friend, Contact was made. (A lesson about the privacy-killing internet.)

The person with the package said yes, she had picked up a package, but her name was on it, so it was hers. She denied it contained what my acquaintance had ordered, but cautiously avoided saying anything incriminating about it. She even supplied a photo of the label with the tracking number; her name and box number included.  She ended by saying "Good luck finding your package".

Monday the post office said the package was in the other person's name, so that was the end of it.

My acquaintance notified eBay that she hadn't received the package, but they quickly denied the claim, saying the tracking number showed it had been delivered.

This is where I came in. She wanted to turn matters over to the police-- I said that since the other person's name and box number were on the package, that would probably be pointless (and I always try to discourage involving the Blue Line Gang anyway). So she gave me a chance to handle it and I wrote her appeal for her.

I looked over every document and message back and forth. I gave eBay every bit of information available, including the name and address of the person who had picked up the package, saying that they were unknown to the purchaser and refused to return the package, saying that since her name was on it, it was hers. I offered to send photographic evidence if they'd tell me where to send it.

This made eBay relent and refund her money. I count this as a double win. My acquaintance got her money back and I found out where a person I probably shouldn't trust lives. I just hope the eBay seller didn't get charged unless the mistake was somehow theirs.

Is this how things might work in a free society where calling the cops isn't an option? Seems like it could be.

Thank you for helping support KentForLiberty.com
Get a Time's Up flag or two

Just have done a thankless to solve this issue, otherwise police will make it more complex, charge sheet and fine issue. Mistake may be happening but solve it with our priority.