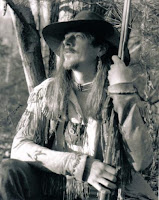 I've wondered before whether I am a "patriot". A cute statist girl called me one several years ago and I wasn't sure whether I should feel insulted. (She later decided she hated me because I don't support "the troops" or the Blue Line Gang, both of which she adored.)

I decided to figure out what makes a person a patriot, but I discovered that the rabbit hole is deeper than I had expected.

1 - a person who loves, supports, and defends his or her country and its interests with devotion.
2 - a person who regards himself or herself as a defender, especially of individual rights, against presumed interference by the federal government.

It also says the word is from Greek, patriṓtēs -- fellow-countryman.

I guess I fit #2 somewhat. I'm more of an educator and advocate than a defender. And I oppose the violation of individual rights by anyone; federal, local, freelance, or whatever. It's the violation that matters, not who commits it or why.

But what about #1? This raises the question, what is a "country"? According to the dictionary it is a state or nation. I unequivocally reject the state, but what is a "nation"? Back to dictionary.com...

1 - a large body of people, associated with a particular territory, that is sufficiently conscious of its unity to seek or to possess a government peculiarly its own
2 - the territory or country itself

I'm fine with people and territories, but the people are only a country if they want a government "of their own"? No thanks on the shared government. That's just antisocial. I guess this is why I'm not a nationalist; I am not a statist and it seems you can't be one without being the other.

So, no, I'm probably not what most people would call a "patriot", and I'm fine with that.

And whatever else they may be, DemoCRAPublicans are partiots-- loyal to their party, their chosen branch of the political cult. If that loyalty supports or defends the country, they are OK with that. But they are also fine with it if it hurts the country. Or if it harms and kills individuals. The Party is what matters to them. I find that disgusting.

Patriots today: "Support the troops and the police. Respect the government, even if you dislike the results of elections. Vote. Obey the law."

Seems like the definition of "patriot" is a bit flexible.