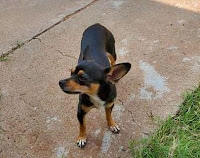 The dog that made friends over treats, "Snacky"

I'm not a dog person. I don't automatically like every dog I meet; they have to win me over. And many have done so over the years. But some of them don't even try.
I walk around town for a half-hour or more every day, unless the weather is bad enough that I use the Gazelle machine (but I find that even more boring than walking in town).

No matter the path I take, I encounter aggressive dogs who don't stay in their yard. Most are either some chihuahua mix or a pit bull (or pit bull mix). I hate the dogs that come after me.

Long ago I started carrying dog treats; to either make friends or at least to buy me time. There was one dog who quickly learned I wasn't someone to attack, but that I offered treats to friends. Until he disappeared a few weeks ago he was always watching for me to pass.

I also carry a big stick in case treats don't work. I have had to use it a couple of times.

There is a yard I sometimes pass where two pit bulls live. One of them was a puppy this summer. I was nice to the puppy every time I went by, trying to avoid future trouble. The grown dog usually stayed inside the fence (the gate is often open) and glared or barked. As the puppy has grown it has gotten more aggressive. I have tried offering treats but neither of them was smart enough to ever notice the treats. (I have a very low opinion of pit bull intelligence based on every pit bull I've ever met.)

A couple of months ago the two of them charged my daughter and me as we walked by and I whacked the puppy on the head with my stick. He yelped and ran back to the yard. For weeks afterward, he would bark from his yard but didn't come after us. Sometimes he would actually run back inside the fence before starting to bark.

Then a few weeks ago he decided to go for it again-- it's always when the grown dog is with him. That time I held my stick out to hold them off, and a passing motorist charged his pickup at the dogs and they ran home. The motorist had some unkind things to say about dog owners who let their aggressive dogs roam, and I agreed.

Yesterday, they came at me again-- it was as though they were waiting to ambush me. It's a good thing I'm alert! I held them off with the stick and told them "No! Go home!" They turned and ran but as soon as I tried to walk they came at me again so I went at them swinging. A motorist who was sitting at the stop sign put his car in reverse and distracted the dogs by driving backwards at them as soon as he saw the situation. I was glad my daughter wasn't with me this time.

The people who own the dogs are sometimes in the yard. I wave at them. I suspect they don't speak English but they wave back. I don't want to dislike them, but they aren't making that easy.

Once they had a dead rabbit hanging by a rope in the yard, high enough the puppy could barely nip at its feet if he jumped high enough. I wondered if this was some sort of training, but I don't know.

I've tried other routes, but as I say there are other dogs who do the same sort of thing. A huge bulldog came at me one day and almost got me even while his owner yelled at him. And I almost kicked a tiny terror back into his yard a couple of times. I've made a crazy winding route around town trying to avoid the aggressive dogs and have realized it simply isn't possible. I'm going to walk my preferred route and the bad dogs along the way are just going to have to learn to leave me alone.

Thank you for helping support KentforLiberty.com.
Check out my prepping community on locals: Casually Serious Prepping
I hope I add something you find valuable enough to support. If so... Donations and subscriptions are always appreciated!