What's up with these markets?! 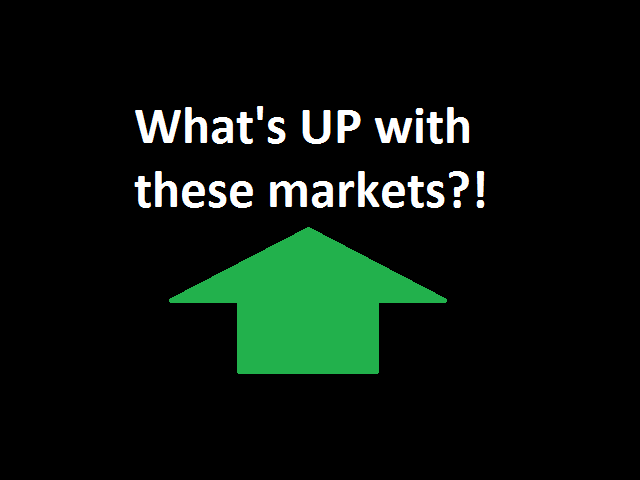 Stocks, gold, cryptos, and a whole lot more - markets are moving fast, volatility is up, and new highs (or lows) are being made! What the heck's going on?

I keep hearing from financial analysts I trust that "virus fear" is a real risk to markets and supply chains. Apparently, the next year could be really ugly for stocks. US equity markets have been incredibly overextended for years, thanks to easy money from the Fed's quantitative easing (QE). The recovery since 2009 has been a fraud. I know that, you know that, but the mainstream still doesn't know it (or won't admit it), and the charade continues.

But even as the fraud seems to be coming to an end, every day we reach a new all-time high - on every index! Apparently, things have never been better!

That's a logarithmic chart, so a climb like that is parabolic. An unprecedented amount of currency is flowing in, and the amount increases every day. At some point, that's going to end in disaster for everybody still involved.

Aren't all-time highs newsworthy? Don't they potentially indicate something's going on? But the mainstream media doesn't even mention it:

Day after day, new all-time highs.... but nothing about it anymore from the corrupt media puppets.

Another thing you don't hear much in the mainstream about: GOLD.

Gold has done well over the past year, after several years in a sideways slump. But since the start of 2020, gold has gone quiet again, despite near-war with Iran and the coronavirus hitting China. When will gold break out to levels not seen since the spike above 1700 USD in 2011-2013?

In many currencies, it already has! For example, the fiat currency of choice up here in Canada:

I started my YouTube channel in early 2009, advocating gold and silver bullion held privately in coins and bars. In 2010 I told my family what I had learned, and what I saw coming, recommending they convert at least some of their paper assets into gold. They didn't, and in the decade since the price has already doubled.

As for silver, it often lags behind gold in a bull market, so I'm not surprised it's still languishing under 18 US Dollars per troy ounce - a ridiculous price for a supposedly-precious metal!

Are we in unprecedented financial times, or not? I sure think we are, but the silver (and gold) price really don't show it! I can potentially see a large price move coming, which means a short squeeze and physical shortage, premium increases, and panic buying at any price. I've seen it before, and I'm sure it'll happen again. Consider scooping up a little cheap physical silver, if you have the means, while things are still relatively quiet.

Oil has fallen over the past several weeks to just over 50 USD.

My post here explains how we'll see 6-digit prices in the near year or so.

Meanwhile, STEEM has recovered to its highest level in 6 months, and many other alt-coins are surging upward right now as well. It does appear that Bitcoin dominance is finally back on the decline. In other words, it's 'alt season'!

STEEM has a long way to come back up, but that's okay, I'm loaded up and ready for the journey! ;D

The blue line represents 'normal' loss of market share from Bitcoin to the other cryptos, during typical neutral or bull markets. But during a crypto bear market, funds flow from everything back into Bitcoin, which is represented by the violent deviation over the past couple years. We're now back on track, as the cryptos all rise, and funds flow from Bitcoin to the others.

As I'm polishing up this article, Bitcoin is testing the 10400 level. If it breaks above, it could produce another good jump to almost 11k. Volatility is back, so hang on to your short term trades! Best to accumulate on dips and hodl for the long term.

Markets and societies are in flux right now. Western stocks are at all-time highs despite warning signals flashing everywhere. Gold is doing well, and set for more moves up. Cryptos continue to move into a bull market, with Bitcoin now giving way to some of the other value coins, especially those with established uses and communities.

TESLA ceo also says we're most likely living in a simulation; anyway, he's a weird guy. That's a really nice, colourful chart, it should be your thumbnail.

Scary about virus fear fucking up supply and demand. Just like with other topics like vaccines and whatever you're not allowed to talk about on social media, the social reaction tells you a lot. It's basically a flu plus media hysteria.

The mainstream doesn't reveal anything other than just a regular flu, yet my feeds are constantly filled with ridiculous panic videos like a chinese woman spitting on elevator buttons with "wuhan" in the title, or crowds of people twitching together, or planes of people getting sprayed with stuff by guys in hazmat suits.

Yeah something's a little different with this one. I smell psyop, but also feel like it's not like past ones.
Hopefully STEEM is done the descent, finally. Time for a bull market!

Its crazy, fundamentals don't work in a rigged economy.

No, nothing does - not even technical analysis of chart patterns! Everything's rigged and nothing's gonna make much sense until it isn't.

I try to buy a little gold and silver when I can, but more as an insurance policy than an investment. I don't know if I could ever sell any. It'll probably just go to my kids when I'm dead. I actually warned my son, right before my wife and I traveled recently, that, if we died on the trip, the quarters and dimes in my coin machine were silver and to not just spend them as cash :-)

Hahaha, that's funny, although a bit grim! Glad you returned from your trip safely.
I'm the same, for me it's insurance, but for me it's also savings. You're probably in a better overall financial situation (if you went on a trip for fun, I can guarantee it!) For me, when I was out of cash (was homeless due to betrayal and illness from 2016 to 2018) my silver was there to bail me out and get me through to a safe place. Once MediKatie and I stabilized in an apartment (Vancouver is very hard to find rentals even if you have money), we started to work on our health and finances, but then suddenly had a surprise baby. So we haven't really managed to recover our stack, but we definitely still believe in owning PMs as savings, and advocate others do so if they're able. It can definitely save your ass.

It’s great advice. I have seen people selling when I’m buying. It’s nice to have that to fall back on during hard times.