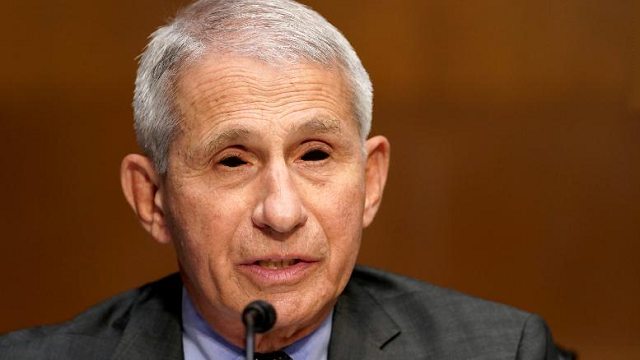 Analysts, politicians, experts, pundits, media, celebs... They've ALL been completely wrong about this Covid pandemic. Only the "crazy" conspiracy theorists have been right! Fauci, the global figurehead of the crisis announced today what only the wildest "nutjobs" have predicted: a 3rd dose of Covid shots for everyone!

CNN reports today that Pfizer, whose "vaccine" is NOT a vaccine at all but rather an experimental gene therapy, originally anticipated their product would be effective for life. Turns out, looks like regular injections (potentially with new formulas each time) will be required in order to maintain effectiveness. Just like the flu. Oopsies! Sorry everybody, honest mistake. How could we have known?

Of course, what "effectiveness" for these products means is anyone's guess, since it has been proven that they don't stop transmission of the virus. In places with early and fast vaccine deployment, related illness and death is rising rapidly, indicating the vaccines may not just be ineffective, they could actually be causing Covid. Indeed, a new study by the trusted pro-vaccine Salk Institute shows that SarsCoV2's spike proteins - not the virus itself - are what makes causes disease. As these mRNA "vaccines" turn recipients' bodies into spike protein factories, is it any wonder we're seeing a new wave of sickness?

No reasonable/honest/significant testing will be done on the idea of permanently turning the entire world into spike protein generators, but that's how we roll nowadays. Good luck, humanity! Our only chance is this mystery serum created by the same people that have brought us poison and death for decades.... Ready? GO! Because anything is better than risking Covid! (/heavy sarcasm)

So, the newspeak term "fully vaccinated" is already useless, since nobody is ever fully vaccinated. 2 doses isn't the end of it, that's just to get you hooked up to the syringe! Now the government (and other assorted corporations with your best interests at heart) have an ongoing direct line into your bloodstream and genes, and can make adjustments on a regular basis. Instead of "fully vaccinated", the best any of the injected drones can hope for now is "recently vaccinated".

And of course, "immunity passports" (which aren't actually passports and don't have anything to do with immunity) are going to be absolutely essential in the New World Normal, so you'd better be okay with a technocratic dystopian control grid, the loss of the last of your privacy, and a cashless economy.

CNN says 48% of Americans have taken the shot. Will these devoted pro-"vaccine" guineapigs admit they've been had, that they got duped by Fauci and big pharma, and that the "crazy conspiracy whackos" were right, AGAIN? Or will they just continue to lick the boot on their face?

Only an idiot would listen to the experts (paid media whores) at this point. The ONLY group that has consistently been 100% right about this are the people being deemed "fake news" and censored by the mainstream, deplatformed, banned, and deleted.

I've never been wrong about anything, period.

After 1000 videos and 2000 articles, I've been 100% right about everything I've said for 15 years, despite making some extremely outlandish claims that were ridiculed at the time. Everything I've ever said remains up, so feel free to look for anything that wasn't accurate. My critics have all fallen quiet, but not a single one had the intellectual honesty to say "you were right". They just disappear - including all my friends and every single one of my family members. Turns out, being right isn't always a good thing. In my case, it has cost me everything - but I won't stop speaking the truth. I'd rather be correct, and morally right, than popular or rich.

What's happening right now, once you admit it to yourself, connects so many dots. Yes, they're attempting to take over the world. It's that simple.

This is the reason for 9/11 and the Patriot Act. It's the reason for the psyops and nonstop fear. This is why nothing really makes sense in the world anymore. It's why the economy collapsed in 2008 and didn't really come back. This is why the elites aren't hiding their actions and intentions anymore. This is also why the world wars happened. This is why the Fed was created. It's why they shot JFK. Everything that has happened on this planet in the past 100 years has been to lead us up to this point, and has been done by design, with this goal in mind. Tens of millions have been killed, billions have been harmed to make this happen.

The "immunity passport" IS the Bible's mark of the beast. It's their big play, the necessary step before taking humanity through the next phase of the plan. Everything hinges on getting the majority of us to comply with digital IDs and permanent tracking. After that, anything is possible. But first, they need to get you to carry the chip. And the way they've decided to go about that is to associate it with a regular injection of something we can't refuse. Take this "free" injection, get this "free" app, do what you're told, and everything will be wonderful, you'll see.

I honestly don't know if there's much we can actually do at this point. Too few people have their heads screwed on right. Too many are bought up and controlled by the system. We are floating, lost. We are up for grabs.

But I'm not giving up, and that means I'm not going to stop speaking the truth, and warning about what I see coming.

"As vaccinations continue to increase, medical experts believe coronavirus may end up being like influenza, which requires a new vaccine every year both because the circulating strains mutate quickly and because immunity from the vaccine wears off quickly."

EXACTLY what I've said, word for word, on a regular basis for at least the past 12 months.

If you're reading this, you're probably not surprised by Fauci's admission today. There's no way they could have sold this scam by coming out from the start and saying "we're going to need you to submit to injections of rushed experimental drugs on a regular basis". They wouldn't have managed to get half the population to agree. In fact, they'd have had revolt, and rightly so. But now that they've got their "cure" into everybody who will take it, they're admitting it's a life sentence. They had to bait-and-switch us, and silence anyone (such as myself) that saw through it and spoke out. I'm banned on every mainstream platform, but I won't stop speaking the truth to my 50 readers on Hive, and hoping it resonates outward from there.