The deep state is torturing and killing Julian Assange because he exposed their evil. 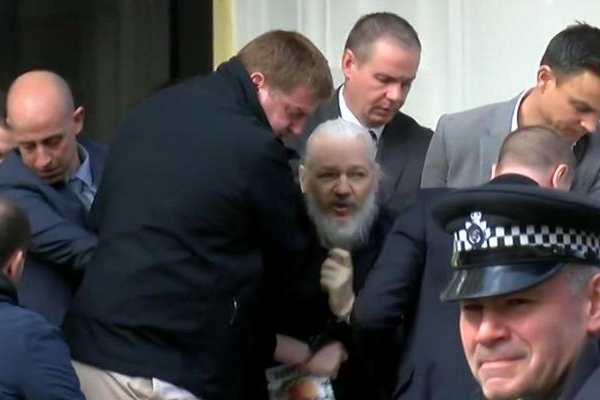 For exposing the crimes of Hillary Clinton (treason, murder, human trafficking, rape, etc) and the American war machine (death of innocent millions), the journalist Julian Assange is being tortured and starved - without access to legal process.

If you think any part of that isn't fully accurate, you simply haven't been paying attention.

Assange was absolved today by Sweden of the bogus rape charges, which they only created at the request of the USA, clearing him for release from prison in London UK, for further torture and eventual death in Guantanamo Bay. As you remember, he was stuck inside the Equadorium embassy in London for many years, until recently when the UK and USA finally got their way and dragged him out to "face justice".

This is a man who committed no crime and yet is being slowly killed without any chance to defend himself. Once the story cools a bit more, and more of his supporters have stopped talking about it, he'll be killed. They (rightly) fear he will be a martyr, so they have to wait a little longer for his support to wane. It gives them more time to extract revenge through his suffering, which I'm sure suits his captors fine.

The announcement will be that he committed suicide, or his health gave out, but it will be murder. Not just murder, but murder after months of meticulous torture, designed to pull the most possible amount of revenge from the man before finally letting his physical body expire.
As a reminder, this is the guy who helped bring the truth about America's wars in the middle East to the public. He embarrassed the Democratic Party by exposing Hillary's trail of lies, corruption, fraud, and murder. He helped other whistleblowers and truthtellers get their stories out, and it upset a lot of powerful elite people.

Now they're doing whatever they want to him, behind closed doors, and none of us are doing a thing about it.

Soon, I'll be writing that he's dead, with a link back to this post, saying "we knew, and yet did nothing".

Why aren't we doing anything? Wouldn't we want people to be supporting us and trying to free us, if it was us being held in isolation 23 hours a day, denied basic rights, denied legal counsel, denied proper food, pumped full of mind-altering drugs, physically and psychologically tortured to the brink of madness?

Who is paying for this imprisonment and torture? The taxpayers are.... WE are.

I am Julian Assange. He represents real journalism and truth, he represents the fight against corruption and tyranny. He's a whistleblower, a truther, a patriot, and a conspiracy theorist - all titles I value and embrace, but which greater society often uses to degrade and belittle. He's one man standing alone against an entire empire, taking the brunt of their abuse and hatred, refusing to kneel, still trying to pull his muddled thoughts together and mount some kind of legal defense, even though the kangaroo court they have him in long ago decided the outcome.

It's like watching a pack of rabid dogs torturing a defenseless wounded mouse, delighting in their power over it, in their superior numbers, in their dominance. As a bystander, I want to vomit. I can't believe we aren't all vomiting.

When they kill him, they're telling the rest of us what they have planned, and our inaction shows them that we aren't going to put up any fight.

Sure, I've had the same thought (about this and a lot of big stories). But that's more how I feel about Snowden. Assange is the real deal. But let's pretend for a second he isn't, and it's all theatre.

All that means is they're telling the rest of us what they have planned. It doesn't matter if it's not real. They're showing us that if you cross the deep state, if you tell the truth about big secrets, if you try to change the narrative from what the deep state has already written, you will be hurt in the worst ways, tortured until you forget your name, discredited to the world, your loved ones turned against you, your work undone, your legacy erased, and your physical body obliterated.

There are 2 kinds of people

Those who haven't got a clue about any of this stuff, and those who do. You and I are in the latter group, which is a much smaller group. Julian's impending death will be heard by different people in different ways:

1) Those who haven't got a clue about any of this stuff will think "some crazy criminal got what was coming to him."
2) Those who know what's going on will receive the intended message: "We can and will kill you if you fuck with us."

The deep state can (and will) soon kill Assange, and the public won't even notice or care. The rest of us, including those like myself who saw it coming clear as day miles in advance, will be shaking in our boots, and rightly so.

Journalism is dead. Truth telling is dead. Exposing conspiracies gets you ridiculed as a "theorist" - until you succeed, and then you die.

Assange survived all those years cooped up in a little room, hoping beyond hope that Liberty awaited him if he could just make it through that period of suffering. Little did he know that he would glimpse the sunlight and smell the fresh air only one last time, as he was dragged from the embassy into prison. Never again to eat, drink, sleep, and think as he pleases. Never to be with his loved ones, never to have access to his own writings and notes, never to have access to the world, never to know if his suffering and sacrifice did any good.

Julian you'll never hear this, but if you could: You succeeded. Thank you so much for having the guts and integrity to do the right thing, for all you accomplished, for showing us the evils of the machine at great peril to yourself. I'd want you to know I won't forget you, and I'm sorry I didn't do more to save you when I could have.

Julian Assange, or the idea that is Julian Assange, is a real man. He's a hero who will be discredited and deleted from history, whose name will live on in the hearts of those who know of Liberty.

Julian Assange, is a hero. Beyond what any statists can comprehend.

And it's really disturbing how few people are doing anything, or even spreading awareness. They won't have to wait long to off him. Most people have already forgotten.

I'm not even really sure what to do about it. : (
Assange is definitely a hero.

I was thinking about him a few days ago, wishing I could visit and offer some support, but we all know that would never 'be allowed'

Thank you for posting on this topic, I know it was weighing on your heart for a while. I can't believe how brave Asange is and he's hardly remembered. It's scary what is or isn't in the public eye.

My younger, more innocent self used to think that 'in the end, truth and justice will always prevail, but unfortunately, as I've grown older, I've come to realise that is NOT how the world works.